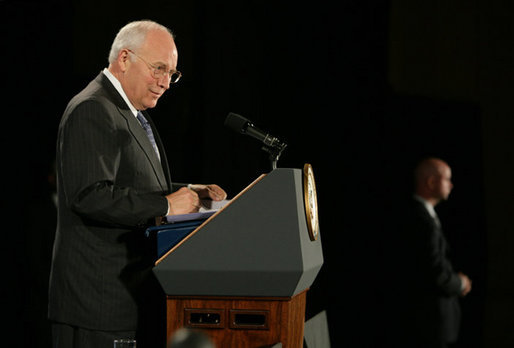 When it comes to former Vice President Dick Cheney’s feeling about President Barack Obama’s foreign policy – particularly regarding terrorist activities in the Middle East and Obama’s military pull back in the region – Cheney isn’t pulling any punches.

Cheney has been making the rounds on the news airwaves and in private speeches. He recently spoke in Billings, Montana, where he addressed attendees at the Energy Expo trade show at MetraPark.

Before he launched his criticisms of president’s foreign policy, Cheney, the former CEO of Halliburton, praised the audience for their work in the energy industry and their contributions to the US economy.

“I am always proud of what we are able to do an as industry and never more so than now – what we have done in developing technology, risking investments and working very hard to make us, in effect, self-sufficient in energy,” he said. “And it really bothers me when Barack Obama acts as if he had something to do with it.”

Cheney also blamed the Obama administration’s policies for putting the United States in a more dangerous position and at increased risk of terrorist attacks.

“The circumstances now are potentially very, very dangerous for our country and our allies around the world,” Cheney said.  “I’m really worried about the state of affairs, but the administration, as far as I can tell, has chosen not to recognize the extent of the problem. The president hasn’t come to grips with the scope of the problem.”

Cheney said evidence of this is found in several of Obama’s decisions including the recent controversial trade of five Taliban officials in exchange for the release of Sgt. Bowe Bergdahl, who was held as a prisoner of war for five years by the Taliban in Afghanistan.  He questioned this move, suggesting it put America’s security at risk.

“Eventually (those Taliban officials) will be back on the battlefield against us,” he said.

The former vice president said he’s also worried about Iran’s nuclear program. He said he believes it’s likely Iran will eventually acquire a nuclear weapon and he doesn’t think negotiations are an effective way to prevent it from happening. Furthermore, he said a nuclear-armed Iran will prompt other governments in the region to follow suit, setting up a black market for those types of weapons.

“There will be other governments in the Middle East that will want nuclear weapons if Iran’s got them because they want to feel safe, and then we’ll have a number of states with nuclear weapons,” he said.

He added a resulting black market will feed terrorists’ and terrorist organizations’ appetites for those weapons and even fuel their growth.

“There will be more terrorist groups who want to get their hands on something deadlier than box cutters the next time they want to launch mass casualties against the United States,” Cheney said. “This is very, very serious stuff, and, in the midst of all this, what is the administration’s position on all this?”

At that, Cheney answered his own question, pointing to Obama’s decision to pull troops from Iraq, essentially leaving only the American embassy there with military protection. He also cited the administration’s pledge to pull all or most of our troops from Afghanistan by 2016.

“They have moved as rapidly as they could to reduce our presence in the Middle East, and that’s not a very good idea,” Cheney said, adding that military presence in Afghanistan allows the United States to keep tabs on that area of the world.

“How do we keep track of what’s going on in Pakistan’s nuclear program?” he asked. “We do it from Afghanistan because of the long common border (between that county and Pakistan).”

Despite his support for a continued military presence in the Middle East, Cheney acknowledged the public outcry against the ongoing wars, which began when he was vice president and of which he had a principal role in propagating.

“I know everybody says those wars have gone on forever, well, it hasn’t been forever and (with this type of battle) you gotta go until you win,” he said.

Cheney lamented budget cuts in the military and said the United States needs to reverse that trend if we are to “reclaim the mantle that we’ve had since World War II as a force for good around the world.”

“Obama is cutting the (defense) budget so deeply that the US Army is going to have less soldiers than it did before Pearl Harbor,” he said. “We have 40 brigades in the army and only four are combat ready. Obama has made dramatic cuts all across the board in the case of our (military) capabilities so he can allocate that money to food stamps.”

The speech concluded with Cheney’s promise to continue his rhetoric against President Obama until “the world is a better place because America is strong.”

“I have been very critical of this administration, but I think it’s extraordinarily important, especially in the days and months ahead, and you will hear more from me,” Cheney said.