The Top 4 Economic Benefits of Ending the Crude Export Ban

The pressure on Washington to lift the ban on crude oil exports has steadily increased in recent months. With exports of refined petrochemical products like diesel, condensate, and liquefied natural gas (LNG) rising – and imports of crude oil falling – many industry experts say that the future of energy security in the US is stronger than it has ever been.

Current crude oil export policies were put in place to align with an oil market that no longer exists. And as production from rich shale plays continues to transform America’s energy landscape and propel the US back to its position as a world leader in oil and gas exploration, the export ban is simply getting in the way.

When energy analysts and the media talk about the price of crude oil, they’re usually referring to one of a small group of specific types of crude oil that are widely and actively bought and sold. The use of these so-called “benchmark crudes” makes it easier for buyers and sellers to price the variety of crudes produced around the world. Brent is considered to be the leading global benchmark for crude, and West Texas Intermediate (WTI) is the leading domestic benchmark.

Of the two benchmarks, US gas prices are much more closely tied to the global price of crude (Brent) than to the domestic price (WTI): 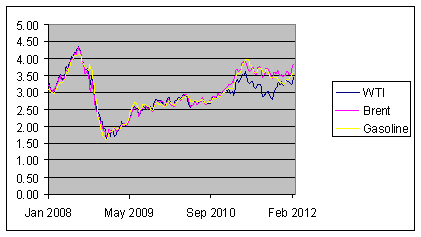 Historically, WTI, Brent, and gasoline prices have all followed a relatively similar path – but in recent years, the divergence of international crude prices and domestic crude prices has made Brent a much better indicator of what Americans end up paying at the pump.

This price divergence can largely be attributed to the fact that US refineries can’t process the lighter, sweeter blends of crude coming out of shale plays. (For details, check out Canary’s post Light on the Top, Heavy on the Bottom: A Crude Oil Refinery Primer.) US refineries are set up to handle heavy, sour grades from the Middle East and South America, which means that the flood of domestic production has built up supply gluts. As a result of these supply gluts, domestic crude prices have fallen, making producers desperate to unload their oil to international refiners who not only will pay a higher price for it, but also are better are equipped to handle it.

If the crude oil export ban is lifted, producers will be able to sell their oil on international markets at a higher price, and the global supply of crude will increase.

The result of these two major changes? Lower US gas prices.

A recent study by ICF International and Ensys Energy estimates that removing the ban would lower gas prices by approximately 2.3 cents per gallon and result in a $5.8 billion annual reduction in consumer fuel costs from 2015 – 2035. (For more information about how gas prices are affected by the crude export ban, read Canary’s special report How Expanding U.S. Crude Exports Can Mean Cheaper Gas for Americans.)

Because allowing crude oil exports would allow US producers to fetch higher prices for their oil on international markets, lifting the ban should make domestic oil production more profitable. This would lead to an increase in exploration and production activities throughout the US, which in turn would create hundreds of thousands of new jobs in drilling, production, and transportation – as well as in industries that are indirectly affected by oil and gas operations.

On the topic of LNG and crude oil exports, ExxonMobil CEO Rex Tillerson said, “Economists and leaders from across the political spectrum, from all sides, agree that free trade would lead to increased investment, more jobs and, importantly, increased production.”

IHS predicts that the resulting increase in production activities from lifting the export ban would add anywhere from 394,000 (base case) to 859,000 (potential case) new jobs to the US economy between 2016 and 2030.

And these economic improvements wouldn’t be limited to oil-producing regions. States with a great deal of consumer spending and manufacturing (such as California) and states with finance or trade hubs (including New York and Illinois) would also see increased economic activity. 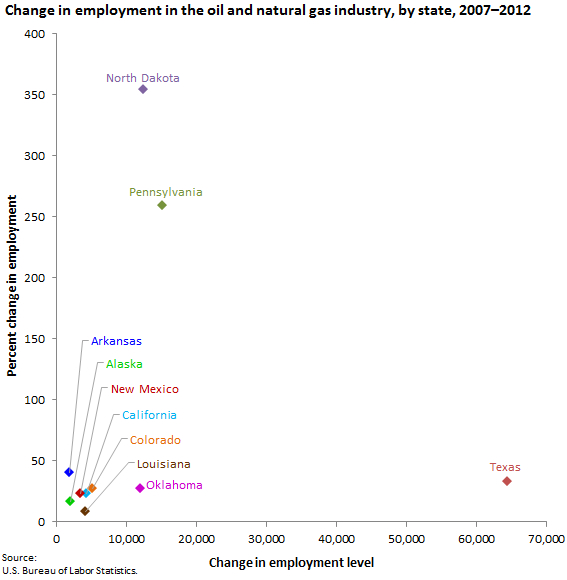 Many industry experts have cited the impact that the shale boom has had on US employment in recent years as evidence of how the job market would be affected if exports were expanded.

Bernard Weinstein, Associate Director at Southern Methodist University’s Maguire Energy Institute, recently opined on increased domestic production and what it has meant for employment: “Direct employment in oil and gas extraction has doubled over the past decade to more than 200,000, a faster growth rate than any other sector of the economy. What’s more, every job in oil and gas extraction supports seven other jobs in energy-related manufacturing, construction, transportation and business services. Both directly and indirectly, the shale boom is helping to revive America’s manufacturing sector and rejuvenate many Rust Belt cities.”

More jobs and lower gas prices are just a few of the benefits that states would see from lifting the export ban. An e21 article published earlier this year by the Manhattan Institute found that federal, state, and local governments would also be able to capitalize on the tax receipts resulting from economic growth and higher individual incomes if exports were expanded.

Weinstein supported the argument that non-federal bodies would, indeed, stand to gain from drilling in their regions: “You see a lot of investment in plant and equipment. That’s good for the property tax base. That’s good for municipalities and counties and school districts. Local governments also derive revenue from the value of oil and gas leases.”

ExxonMobil’s operations in Baytown, Texas, also exemplify the positive impact that increased production can have on a more local level. Their latest project – a multi-billion dollar ethane cracker, which turns the ethane component of natural gas into ethylene – is expected to create a total of 4,000 jobs, 350 of which will be based at the Baytown site.

In addition to the regional economic benefits that would result from lifting the ban, the ICF predicts that expanding crude exports would also reduce the country’s long-time trade deficit by as much as $22 billion by 2020. Although the US has historically been a nation of high imports and low exports (especially when it comes to oil), allowing producers to sell their crude on international markets would help significantly narrow the gap.

The trade deficit has already experienced a decline in recent years as non-crude oil exports have increased. Now at its lowest level since 2009, expanding exports would drive the deficit down even further. A recent USA Today article cited EIA data as evidence of this: “Since 2009, exports of petroleum and petroleum products have played a growing role in reducing the overall merchandise trade deficit,’ said the EIA, the statistical arm of the Department of Energy. The data shows this trade deficit would now be nearly $200 billion higher without US petroleum exports.”

The article concluded by saying that repealing the export ban would increase domestic oil exports, decrease imports, and lower the US trade deficit.

Led by increases in hydrocarbon production and greater consumer product spending (due to projected lower prices for gasoline and other petroleum products), the ICF also predicts that lifting the ban would result in as much as a $38 billion increase in the US GDP in 2020.

4. More Foreign Investment in US Oil and Gas

The “American Shale Boom” has already generated a great deal of foreign interest in US oil production. According to Ernst and Young, foreign investment in the US oil and gas industry totaled approximately $112 billion between 2008 and 2013.

Lifting the export ban would make domestic production more profitable, which would likely encourage even more capital investment from foreign countries. Weinstein explained that more US oil production has invited companies to reshore in the US, which is mostly the result of “comparatively cheap and abundant energy.” The reshoring movement is especially valuable for energy-intensive manufacturing, which includes petrochemical production and metal fabrication.

“Foreign investors are coming here because they have faith in the long-term future of the US economy, as well as our political stability and the ability to repatriate earnings without any restrictions,” said Weinstein.

What if the ban remains in place? A bleak outlook.

The longer the export ban stays in place, the more negative an effect it will have on the US economy. Crude production in the US is continuing to increase and with refining capacity reaching its limits, a domestic surplus in the not so distant future is a very realistic possibility. While the idea of having “too much” oil might seem like a good thing, the negative impact it would have on domestic production would likely reverberate throughout the US economy.

As an excess of light crude builds up, domestic oil prices will fall – and if they fall too far, exploitation of shale plays will become unprofitable and production will taper off. If this happens, all of the potential benefits that would come from expanding crude exports would be jeopardized: Oil and gas-related jobs would be cut, foreign investment in shale production would decline, the trade deficit would increase, and the US would miss out on the opportunity to use its abundant supply of energy to help American consumers and bolster its waning economy.