As the amount of oil and natural gas being produced by hydraulic fracturing (or fracing, as it’s better known) continues to grow, so do the demands the process places on natural resources like water and sand – the key constituents of frac fluid. And although chemical additives – the third frac fluid component – comprise just a small percentage of the mix, they cause more than their share of controversy.

The use of such chemical additives has long been under scrutiny from environmentalists and others requesting the ingredient list. In an effort to be more transparent and more responsible, oil and gas companies have started to come clean about their water, sand, and chemical use. And they’ve begun the hunt for ways to make fracing safer and greener.

The notion of water and sand might sound like the makings of an island beach vacation. But water and sand – and plenty of both – are also the key ingredients in frac fluid. This means that, thanks to the booming shale industry and the prevalence of fracing, neither is getting much time off these days.

Frac fluids are generally 90% water and 9.5% sand. The remaining 0.5% in this slurry is a mix of various chemical additives – what some companies refer to jokingly as their “secret formula.” Until recently, some companies have been very hush-hush about their formulas. But According to the US Department of Energy Office of Fossil Energy, a typical fracture treatment uses between three and 12 additive chemicals.

What’s no secret, though, is that it takes a lot of water to open up and coax energy from stubborn rock. Non-profit Ceres, which advocates for a sustainable global economy, has reported that 97 billion gallons of water were used in the 39,294 oil and shale gas wells hydraulically fractured in the US between January 2011 and May 2013.

Looking state by state, Texas led the roll call, with Eagle Ford producers alone consuming about 19 billion gallons in their 4,300 wells. Pennsylvania – which uses about 4.4 million gallons of water per well – was next, followed by Oklahoma, Arkansas, Colorado, and North Dakota.

But even so, the amount of water used for fracing is still small compared to overall consumption – as little as 1/10 of 1%, according to Ceres. By contrast, American agriculture uses about 32,850 billion gallons of water per year, which is 234 times more water than is used in fracing shale. Even US golf courses could be considered more sponge-like, soaking up .5% of the freshwater consumed.

Still, environmentalists are finding those volumes too much to swallow. They’ve put considerable pressure on energy producers, who are complying with requests to cut water consumption.

Some companies are looking to take water out of the equation all together, considering fracing technologies that instead use propane gel or compressed air. Calgary, Alberta-based GasFrac, for example, says it has used its propane gel technology 2,500 times at 700 wells in Canada and the US.

Other oil and gas companies are turning to recycling the tainted water that comes out of fractured wells – a briny liquid laced with naturally occurring heavy metals and radioactive isotopes. This not only makes environmental sense, it’s also good business.

That’s because it currently costs as much as much as $8 per barrel to transport used water to injection wells – sites where wastewater is pumped into porous rock formations for permanent disposal. Operators who instead recycle save as much as $2 per barrel, said Jeanie Oudin, an analyst with energy consulting firm Wood Mackenzie who spoke with The Wall Street Journal. That could translate to savings in excess of $200,000 over the life of a typical well, Oudin said.

Fountain Quail Water Management of Fort Worth, Texas, sells a transportable machine called ROVER that uses natural gas to boil wastewater from fracing operations. Because it’s a closed-loop system, the steam that the process creates is used to reheat the next batch of water. The end result, Fountain Quail says, is water that meets federal drinking standards and a solid waste product that can be transported to a proper landfill.

The process of fracing forces frac fluid under high pressure thousands of feet into underground rock formations to crack shale rock and release trapped oil and natural gas. After shale rock is hydraulically fractured, billions of grains of sand are used to hold those fractures open, allowing oil or gas to migrate to the surface to be collected.

Because a shale gas well can use more than 4 million pounds of frac sand – called a “proppant” for its ability to prop fractures open – demand for sand in the US is at an all-time high. Fracing operations are expected to use nearly 95 billion pounds of sand in 2014, up nearly 30% from 2013. According to Freedonia Group, a Cleveland-based market researcher, demand for sand is expected reach 52.1 million tons by 2022. 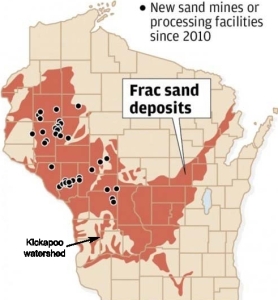 We’re not talking about run-of-the-mill, sandbox-quality sand. Frac sand used by the petroleum industry has to meet extremely demanding specifications. It must be high purity silica sand with grain size perfectly matched to job requirements. It has to be round, so it can carry hydraulic fluid with “minimal turbulence,” and it’s got to be crush-resistant when fractures close.

The best sand for the job is a 99.5% pure silica known by two names: Ottawa White and Northern White. Northern White is mined mostly in the US Midwest – places like Garnavillo, Iowa; Festus, Missouri; and Trempealeau County, Wisconsin. In fact, the Badger State leads the nation in frac sand mining. The number of permitted or operational mines and processing facilities in Wisconsin rose from 10 in 2010 to 130 in 2014; another 100 mines and facilities are proposed or under development.

At the same time sand producers are scrambling to meet customer needs, there’s been a dust-up over the mining of the granular natural resource.

Many of the concerns involve water pollution. Vast piles of sand, sediment, and dirt wash off properties, often after heavy rains, and contaminating waterways. Although in 2013 a Wisconsin company was ordered to pay $200,000 for stormwater and air permit violations, the state’s Department of Natural Resources (DNR), which oversees such things, says that most sand mining and processing companies are trying their best to comply with all regulations and perform in a safe, environmentally sound way.

“Some facilities are doing things, almost everything, perfect, but others are struggling,” Deb Dix, the DNR’s point person on sand mining, told the Milwaukee Journal Sentinel.

Environmentalists and others have also taken aim at respirable crystalline silica, a type of dust that has been linked in workplace settings to serious health problems. While crystalline silica dust is not regulated as a hazardous pollutant by the US Environmental Protection Agency or by the state of Wisconsin, it is indirectly regulated as particulate matter. And sand mining companies are required to have a plan for controlling so-called fugitive dust released during mine blasting or blowing off trucks, trains, conveyors, or storage piles. Members of the Wisconsin Industrial Sand Association not only consider themselves highly regulated, they do more than a little self-policing to monitor and control the dust. That includes watering, covering, and shielding the sand.

Money Where the Mouth Is

Surely, no holiday conjured by sand and water would be complete without a cocktail. And that’s where the chemical mix that completes the frac fluid recipe comes in.

Used to improve the safety and effectiveness of the fracturing process, those chemicals have been referred to as a toxic cocktail by some fracing opponents. Oil and gas companies are quick to point out, however, that the same chemicals in frac fluid are contained in the products that average consumers use in everyday life – from antifreeze to make-up remover to toothpaste.

Some individuals have even taken the cocktail concept literally. Governor John Hickenlooper of Colorado, a petroleum engineer by trade, went so far as to quaff a glass of frac fluid to prove it’s safe.

And he’s not the only frac fluid connoisseur.

Executives of oilfield services giant Halliburton have sampled their own frac fluid, a blend that they say is environmentally benign because it’s made from food-grade ingredients. Halliburton’s new fracking formula and methods “don’t quite call for the downhole delivery of fruits and vegetables,” according to the company’s web site. “But it does rely on some of the same acids and enzymes present in those items to create one of the most innovative and environmentally safe fracture solutions ever conceived.”

A Focus on Responsibility

Individuals who want to know what’s in frac fluids – potable or not – can turn to FracFocus, an online chemical-disclosure registry for the details. Since 2011, FracFocus has been compiling a list of the mixtures used at more than 52,000 US oil and gas wells.

Oil and gas companies are starting to climb on the full disclosure bandwagon. 21 states actually mandate disclosure of the chemicals that compose frac fluid mixtures – but voluntary disclosure of the information is common regardless. More than 500 companies have reported data to FracFocus. What’s more, the Environmental Protection Agency (EPA) maintains a public registry of preferred chemicals for various industrial processes, which companies can actually refer to when they’re seeking greener alternatives.