The Wizards of Marcellus 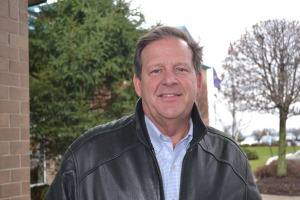 As president of the Pittsburgh-based Marcellus Shale Coalition (MSC), the region’s largest shale energy trade association, David Spigelmyer represents some 300 member companies. Working closely with legislators, regulators, international visitors, and the civic community, Spigelmyer is a champion of shale development, economic growth, and environmental safety in the Appalachian region. He was a public service major at Penn State University and later worked for National Fuel Gas in Buffalo, for CNG (bought by Dominion Resources), for EQT and as Vice President of Chesapeake Energy Corporation’s Appalachia division.

Spigelmyer was instrumental in the MSC’s 2008 founding. Working closely on association standards of conduct and development of its guiding principles with Tom Ridge, the former PA Governor and First US Secretary of Homeland Security, Spigelmyer has served as the MSC’s chairman, vice-chairman and as lead of its legislative committee. This avid outdoorsman says he favors any energy source that can be developed in an environmentally responsible fashion, brings jobs, and can be used safely. He’s also a spokesman for a Pennsylvania he loves, and though he avows no expertise in international energy relations, he was outspoken about current issues we discussed during a recent tour of several Marcellus natural gas well sites.

Canary: How has shale energy development affected our international outlook for energy imports?
Spigelmyer: The liquids produced in shale here have had a significant impact on world oil and gas supplies and prices. We’ve moved from 57% dependency on foreign oil sources to 43%, and the numbers are dropping quickly. The same holds true for natural gas. We’re now seeing the effects at the pump. Oil has dropped to below $45 a barrel, and natural gas in 2008 was $13.71 at the wellhead and nearly $20.00 per thousand cubic feet delivered to consumers. Today it’s less than half that. 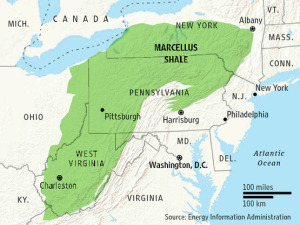 he Marcellus is already providing 25% of America’s gas needs. We’re going to top 5.3 trillion cubic feet in the Marcellus region, including West Virginia, Ohio, and Pennsylvania. It’s incredible. In ’08 we produced only a quarter of the state’s gas supply at 180 bcf. Today we produce 4 trillion cubic feet alone in PA. And then there’s the Utica shale that we’re only beginning to explore.

Canary: But what about energy prices dropping so fast? OPEC this past December decided not to pull back on production – apparently with some motivation to drive out US shale producers by making energy so cheap it would not pay for them to operate. And there has been so much opposition at home to shale development.
Spigelmyer: The story doesn’t get told very often, but you’d think the American public would be more astute when countries like the United Arab Emirates (UAE) and Venezuela fund [anti-fracturing] movies like “Gasland” to create skepticism about shale. These countries’ motivation is to vilify US operations and stop the activity.

Canary: Did the UAE and Venezuela actually do that?
Spigelmyer: Yes.

Canary: Have you heard of any companies that will have to stop drilling projects because of the costs and declining energy prices?
Spigelmyer: It’s a huge investment absolutely, the average cost of a well in PA is about $7 million. Some companies have reduced their drilling and fracking rig numbers since 2012. We had 140 rigs in 2012 and we’ve lost about 60 rigs from pricing pressure.

Canary: But how can these companies continue?
Spigelmyer: This area in southwest Pennsylvania is a liquids-rich region under significant pricing pressure. Marcellus is a 380 million year old stack shale formation. It produces natural gas and liquids; primarily ethane, pentane, butane, isobutane, propane and hexane. It’s a wet gas play, and it’s remained lucrative even at low prices.

Canary: How far can oil and gas companies be stretched? Halliburton, for example, lost $23 billion this quarter in value because of dropping energy prices. Many believe, and certainly the folks at Canary LLC believe, that Americans should push to open up our oil and gas markets for exporting abroad.
Spigelmyer: It would help our country’s geopolitical position, and you’re going to see more of that debate. Though some of the public is skeptical about exports – they believe it’s going to push our oil and gas products overseas and increase prices here – well, I don’t want to be naïve; there could be a little bit of a price increase, but there’s so much gas on the market today that big price jumps are unlikely anytime soon.   We’re producing 16 billion cubic feet a day of gas, and we’re so far ahead of where anyone expected us to be.

Canary: Where is Marcellus gas being shipped?
Spigelmyer: The Cove Point project off the coast of Maryland is probably the closest point of delivery for Marcellus gas. It’s capable of processing a billion to 1.5 billion cubic feet a day. But that’s less than 5% of the [local] natural gas that could go that way. Exporting gas really wouldn’t strap the market for supply. I think exports make perfect sense.

Canary: Have natural gas and liquids infrastructure projects been going on a long time?
Spigelmyer: You bet. Many of southwestern Pennsylvania’s liquids have been targeted for transportation into the Pennsylvania Mariner East Pipeline. Northeastern Pennsylvania dry gas has been tagged for transportation into Williams/Transco’s Atlantic Sunrise Project, and there’s pressure to available markets. Right now we need capacity to move the volume of gas and we have a significant shortage of pipelines available. There’s currently a “spot reduction,” or basis differential that shaves up to $2.00 off the Henry Hub price (today $3.00) per mcf. Companies are taking a $2.00 hair cut gas commodity sales, plus another $.60 to gather the gas. Consequently, much of the Marcellus gas today is being sold at $1.00 to $1.50 per mcf.

Canary: Really low… Can they still afford to do that?
Spigelmyer: People are trying to hold acreage and if you’re in a really good gas production area, the volume can make up for it in production.   That’s why there has been a battle in Pennsylvania about taxes. It’s tight right now. And I’ve been adamant about the fact that you should allow an energy industry foundation to be built first here before you put additional taxes on it.

Canary: Do you think Congress will liberalize and expedite permits for liquefied natural gas (LNG) exports and build terminals to process them faster? These terminals are said to cost $10 billion each and there’s been a real lag in the approval process for gas exports.
Spigelmyer: Some of the LNG terminals are already built. For example, we have gas terminals in the US set up for imports, but these facilites can be turned around to accommodate LNG processing for exports. Cove Point was an import facility in order to supply additional gas to Washington and Baltimore. They can turn this process around [for export] but the D.C., Baltimore, and Philadelphia regions are still dependent on gas from the Gulf Coast and Midwest. That’s because the original pipeline infrastructure was set up from South to North.

Canary: So what can be done about it?
Spigelmyer: We’re working on that now. By 2020, rough one-third of our gas will be moving North to South instead of South to North.

Canary: How much have we reduced our natural gas imports?
Spigelmyer: I don’t have a direct figure on that, but we were taking as much as 3 trillion cubic feet of gas out of Canada. Now we’re producing so much natural gas that I can’t imagine importing it – unless there is an niche market that doesn’t have the pipeline infrastructure to get gas to it.

Canary: Will Congress really liberalize the export rules for both oil and gas?
Spigelmyer: I think there will be a fight, but we are a capitalist society, and we should be able to open markets that strengthen our geopolitical standing as a national and create jobs.

Canary: What about international energy competition, especially from Russia? Their economy isn’t doing well now: inflation, devaluation of the ruble, European sanctions for aggression in Ukraine.
Spigelmyer: Vladimir Putin has an extraordinary amount of power. But unfortunately, you’ve got to fight fire with fire. And we (our nation) must get an appetite to fight fire with fire. That’s where energy comes into play. I think the Ukrainian situation will be a driver in this. Putin has been able to wield such control over the energy market over there. But with an open supply of energy coming from the US and a robust energy export market, we can change that dynamic pretty quickly.

Canary: What did you consider when you were thinking about the bylaws and standards for members applying to the Marcellus Shale Association? Did you talk about this closely with Governor Ridge? What did you emphasize?
Spigelmyer: From the first year in our coalition’s history, Tom’s approach was much like anyone’s who came from PA and knew the energy industry. He’s environmentally conscious, and we had to upgrade our rules to accommodate new shale development and horizontal drilling. The last time the energy standards were revised was 1984 for vertical well development, not horizontal. In ’84, the average well permit was $100 a well; today it’s $5000. We now have a ‘pay as you go’ system and in the Department of Environmental Protection, we have hired a lot of staff. We’re now No. 2 in the nation in terms of the size of our regulatory oversight program. We knew we didn’t have adequate regulatory staff to do inspections, so we changed that.

Canary: When did you know that the Marcellus gas potential was real?
Spigelmyer: I’d say that when we saw Royal Dutch Shell come in 2009-2010 to purchase East Resources for $4.7 billion (East Resources was a natural gas development company active in Pennsylvania), we knew the Marcellus was “for real.” We also knew we needed to heighten our standards and rules in PA because someone could just come in and take shortcuts and jeopardize the play for all.

Canary: How have natural gas prices affected consumers?
Spigelmyer: In 2008, gas topped $20 per MCF. This winter, it will be delivered to consumers for less than half of that. This could be good for everyone because we now have a competitive advantage in energy pricing for major manufacturing – steel, glass, plastics, chemicals, fertilizers, powdered metals and pharmaceuticals. All of these industries manufacture products using natural gas.

We have an opportunity today to generate enormous numbers of manufacturing jobs if we get it right. A short time ago, I was given the opportunity to discuss energy production with Dr. Mohammed Al Rumhi, the Minister of Oil and Gas from Oman. The Minister Ruhmi was educated at Oklahoma State, and he discussed his personal role in the Middle East peace process.   He’s working especially hard to broker a much softer dialogue between Iran and the US. Al Rumhi said, “If I’m not successful, the Middle East loses because your group is moving so quickly into an energy leadership position. You guys have been the leaders in horizontal shale development and we’re trying to learn from you!” It’s been a real eye opener.