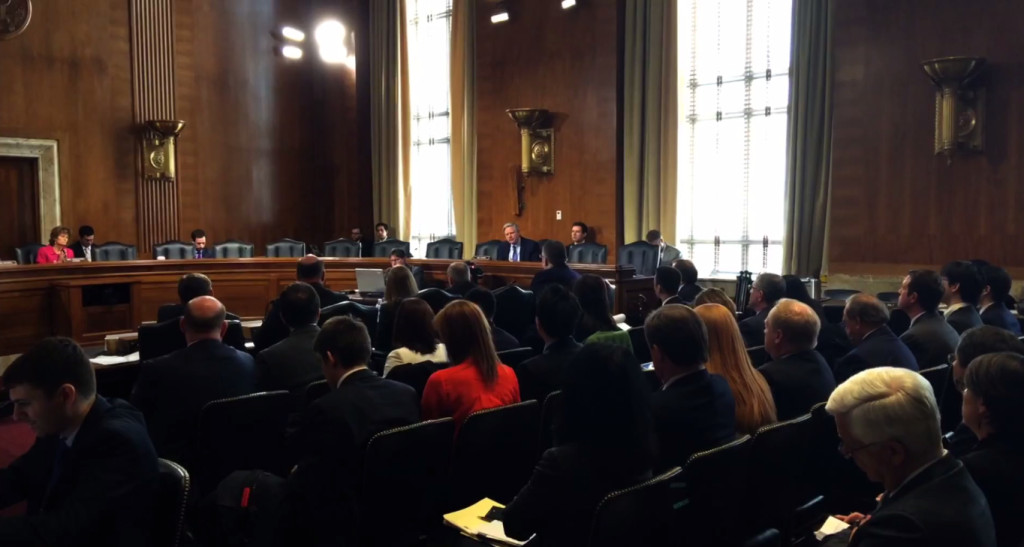 This morning, the US Senate Committee on Energy & Natural Resources held a full committee hearing on United States Crude Export Policy – and Canary got a front-row seat! We witnessed first-hand the entire discussion from the Dirksen Senate Office Building in Washington, DC. CEO Dan Eberhart even live-tweeted during the inquiry (#talkcrude).

During the hour-long event, the committee received testimony on the US crude oil export policy from a number of industry experts:

From our vantage point, we were happy to see that most of the people giving testimony were in favor of lifting the ban. Pascual, for example, provided ample figures highlighting the benefits of rescinding the ban – from reducing the price of gasoline in the US to increasing jobs, state revenues, and GDP to signaling that we support a competitive environment for consumers. There are times, Pascual said, when oil must be used as foreign policy instrument. “The benefits for national security are extensive, as well,” he maintained. “Competition in markets is the best bet” for market security because “you avoid the kind of dominance that single players can take.” But we have a particular opportunity to take advantage of this moment and liberalize exports of our abundance.

Lance echoed the sentiments of swift and decisive action. He stated that he has “never seen an energy renaissance like we’re seeing today.” But he cautioned that our surge will be hampered by continuing to limit our crude exports: By 2020, we could be producing 2 billion barrels over our refining capacity. “Crude oil is the only commodity banned from export,” he reminded us. “That has to change.”

Rosenberg further emphasized that lifting the ban will support our foreign partners, solidify our interests abroad, and set an anti-protectionist tone. American supply is protecting the global market from supply shocks, she argued, and lifting the ban will help continue that. “Washington has a unique window of opportunity… to reap the geopolitical benefits,” she said, noting that we’ve already been able to move forward with tough energy sanctions in Iran and Russia.

Meanwhile, Drevna encouraged legislators to give American producers the widest market for their product by rescinding our crude export restrictions. “Can we get an energy policy based on the abundance we have now???” Drevna asked. “Let’s look at the total free market, not silos.” An interesting side note was Drevna’s discussion of an informal survey that his company recently performed regarding refiners’ plans. Their results discovered that getting the crude has been a bigger issue than refining it. Despite what we keep hearing, he emphasized that the US refining sector is actually globally competitive: “We do it very efficiently and very effectively.”

As a wrap-up, Committee Chair Lisa Murkowski (R-Alaska), thanked the panelists for joining the conversation. “What we’re trying to do here as a committee is to focus on this as a policy and assess it from a national security perspective, which I believe is critical, but at the same time making sure that we’re looking out for the economic well-being of the people around the country,” she concluded.

Here at Canary, we’re also focused on economic well-being of the people. That’s why we wholeheartedly support the end of the crude oil export ban. Today’s testimony backs up our position, and we welcome your participation. Visit https://canaryusa.com/talkcrude/ to link to our petition and add your voice to our argument.