Sounding the Trumpet for an American Renaissance

by Dan Eberhart
American dream, American Renaissance, DUGEast, Leon Panetta, US energy independence, US energy security, US international relations, US partisan gridlock, US Secretary of Defense, US shale
Comments are off

He’s the lion in winter.  He’s a voice of conscience.  And he’s ready to put up his dukes and spar a few rounds with gridlocked Congressmen who have pushed the leadership debate in Washington DC to a fractious no-exit. 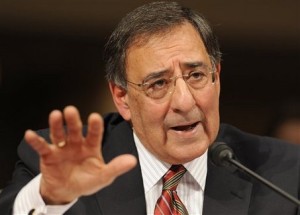 Leon Panetta, 23rd US Secretary of Defense, speaks at DUGEast in June.

Leon Panetta, 23rd US Secretary of Defense (2011-2013) and former Director of the CIA  (2009-2011), is perhaps best known for overseeing the military operation that brought down Osama bin Laden.  But in a recent keynote speech at a luncheon sponsored by Canary, LLC, part of the DUGEast energy conference in Pittsburgh, he spoke plainly about energy security and our leadership future.

“All of you in the gas and oil industry are developing energy resources here and worldwide,” Panetta began.  “I can tell you, as Secretary of Defense, how dependent the security of our nation is on your industry.”

Fighting for a Better Life

The US Department of Defense, in fact, is the largest user of energy in this country, consuming roughly 112 million gallons of fuel – $60.4 billion – in 2013 alone.  Those numbers are not likely to decrease.  “Your mission is the mission of what this country is about: to give our children a better life in the future,” Panetta said.

As the son of immigrants who traveled from a poor town in Calabria, Italy, to Monterey, California, before World War II, Panetta learned the values of sacrifice and cooperation while helping in his parents’ restaurant.  Later he worked in the fields fixing irrigation pipes and harvesting walnuts (which allowed him to prepare “for all the nuts in Washington.”)  He also watched young men in Monterey training for the WWII battlefields.

“I used to ask my Dad, ‘Why would you and Mom travel thousands of miles from the comfort of home to [live] in a strange land?’  And I remember my Dad told me, ‘Your mother and I believed we could give our children a better life in this country,” Panetta recalled.  “But the dream is just a dream unless you’re willing to work at it, to sacrifice, take risks, set goals, have a vision, and fight for what you believe in, and fight to make it happen.”

America at the Turning Point

The will to “fight” for American values – national security, immigration reform, education, deficit reduction, among many other issues – is at stake in an America divided and “at the turning point,” Panetta says.

“In a democracy, we govern either by leadership or by crisis.  If leaders are willing to take the risks involved in leadership, we can avoid or contain crisis.  But if leadership is not there, we will govern by crisis.  That’s what we do today.  We wait for crisis to happen and then respond.

“I’ve been in and out of Washington for over fifty years of public life,” Panetta continued. “Looking at the situation today, we are very much at a turning point for the United States.  Obviously I’m concerned about the situation in Washington:  It’s probably the ugliest I’ve seen…the gridlock and dysfunction in Washington is of great concern.  And then you add to that a growing mood of somehow withdrawing from the world, not wanting to get involved and not exercising world leadership that this country has always been about.  When you put those two together, it raises concerns about what kind of path the US will follow in the 21st century.”

Panetta, a long-time California Congressman (1977-1993) who has worked under both Democrat and Republican presidents, clearly envisions two separate paths for our country.  One leads to rebirth; another to decline.

“I believe deeply we could have an America in Renaissance, a strong America in the 21st century,” he said.  “The fundamentals of our economy are good; we’re an economy that has tremendous innovation and creativity [and] we can teach the skills that need to be part of the workforce of the 21st century.”

“We could truly develop energy independence for this country… [and] discipline our budget and do what needs to be done on the fiscal side to make sure that we set a strong path in the future.  We can have a smaller defense but one that is agile and remains the strongest on the face of the earth, and supports a strong diplomatic effort that provides world leadership in a very troubled world.”

The first path, he maintained, requires governance.  Elected leaders must work together across the aisle to make “tough decisions” on budgets, taxes, energy, transportation, education, defense, immigration and human rights.

But the second path would see “an America in decline, an America that operates by crisis after crisis… an America that is dysfunctional in terms of our ability to govern ourselves, an American unable to protect our most basic freedoms, our economy, and our national security.”

Whether we choose the first or second path depends on how we govern ourselves, Panetta said.  He indicated the second troubled scenario fits the current Congressional trend.  Extreme partisan gridlock and refusal to commit to hard decisions won’t move the country forward.

“When crisis gets so bad, you respond to crisis,” he continued.  And unrelenting crisis, combined with fear, often creates paralysis.  For example, a legislator may decide, “I don’t have to raise taxes or reduce the budget,” Panetta explained.  Instead, important decisions – and legislation – are just kicked down the alley.  “You could operate that way,” Panetta said.  “But there’s a price to be paid; and you lose the trust of the American people in Democracy.  Trust is everything.”

The Will to Work Together

Panetta, the former Director of the Office of Management and Budget who worked on budgets for every administration since Ronald Reagan, invoked the names of can-do legislators from the past: Mark Hatfield, Jacob Javits, Everett Dirksen, Hubert Humphrey, Sam Ervin, Richard Russell Jr., among others – both Republican and Democrat, moderate and conservative.  They met in the center to get things done.

“Yes, they fought it out in elections, but when it came to national issues, they worked together to enact landmark legislation.  They thought it was good politics,” he said.  Today, though, “confrontation seems to represent ‘better politics.’”  Washington seems to have given up on major issues confronting the country, such as deficit reduction, infrastructure improvements, energy challenges, and trade agreements.

Without deficit reduction, for example, debt will equal 80% of our national GDP, Panetta explained.  “At present, without infrastructure fixes and changes, 30% of our highways and bridges are in danger of collapsing.”  Without energy plans, the country may not be able to meet the demands of global energy trade or the needs for domestic energy security into the future.   Panetta sees national energy policy and international security inextricably bound together.

“We still live in a dangerous world; we’re still a country at war; we still have the threat of terrorism,” he continued.  “Even though we’ve gone after Al Qaeda’s leadership, it’s on the rise in Yemen, Somalia, Syria – and there’s a danger that they’ll start a base.  We can’t let them do that.  In North Korea, if they combine their nuclear weapons with an ICBM…they’re in danger of delivering a nuclear weapon to us.”

“We’ve got Russia and Putin exercising greater aggressiveness in the Ukraine… We have to do everything necessary to support the Ukraine, including bucking up NATO, resurrecting missile defense.  We ought to be providing alternative energy sources [including LNG exports] to Europe.”

Lastly, “cyber attacks are the battlefield of the future.  They can cripple this country; we are getting a hundred thousand cyber attacks a day,” including at banks and financial institutions and companies in Silicon Valley.  Saudi Arabia has lost 30,000 computers to cyber attacks.  “We could have the next Pearl Harbor be a cyber attack,” Panetta warned.

The Rise of the American Dream

But in the end, Panetta believes American leadership will rise again.  It will rise to the occasion even if the current crop of federal legislators fails to cooperate and do their jobs.

“The fundamental strength of the US doesn’t rest in Washington; it rests in the common sense and grit and willingness to fight [of the American people],” Panetta said. “If [leadership] doesn’t change from the top down; it will change from the bottom up… People will elect men and women committed to the values of this country.”

Leon Panetta served as Secretary of Defense from 2011 to 2013 and director of the CIA from 2009 to 2011. He was a US Congressman from 1977 to 1993, director of the Office of Management and Budget from 1993 to 1994, and served as President Bill Clinton’s chief of staff from 1994 to 1997. He is the co-founder of the Panetta Institute for Public Policy, served as distinguished scholar to Chancellor Charles Reed of the California State University System, and taught public policy at Santa Clara University.
Link