From “man camps” to mansions, the impact of shale drilling is spilling over into the US residential market.  While the rest of the country creeps slowly out of the worst housing bust since the 1930s, the comeback is significantly more robust in some small, formerly stagnant cities like Youngstown, OH; Yorktown, TX; and Williston, ND.  As the real estate mantra ”Location, location, location!” suggests, geography is key: each of these towns is benefiting from its proximity to a prolific shale formation.

No Longer the “Shrinking City”

Once a steel boomtown second only to Pittsburgh in total mill output, Youngstown was devastated by the decline of the US steel industry during the latter part of the 20th century.  In 2010, the city’s population was less than half what it was in 1950.  But with the continuing development of the Marcellus shale, which encompasses 104,000 square miles across Pennsylvania, West Virginia, southeast Ohio, and upstate New York, Youngstown is shedding its reputation as America’s Incredible Shrinking City.

The population of the greater Mahoning County area, where Youngstown is county seat, rose slightly more than 20% since 2000. And with more jobs becoming available as new energy companies enter the market, home prices are rising in response. Between July 2013 and October 2013, year-over-year, the median sales price jumped 17.7 percent. During the same time, average price per square foot spiked 13%.

An hour south of Youngstown is the Ohio Valley region.  A beneficiary of shale-related growth since 2006, the area has seen home sales increase 17.5% in just the first eight months of 2013.  Equally significant is the fact that house prices rose 11% during the same period.

Across the state line in Pennsylvania, real estate activity is also surging in places like Canonsburg, population 9000.  Between 2000 and 2011, house and condo values in this suburb 17 miles outside Pittsburgh climbed dramatically, from $76,900 to $127,537.  Nearly half of the residents of two large single-family developments under construction are energy-related newcomers.  Local realtors think an already brisk sales pace would be even better if the soft national market wasn’t making it more difficult for natural gas professionals to sell the homes they’re moving from.

There’s no hometown slow-down for people relocating from Texas, however.  Largely because it escaped the “housing bubble” that caused so much damage in other states, Texas didn’t suffer as much from the nationwide recession of the mid-2000s.  What’s more, recovery from the modest effects of the downturn has been vigorous: Texas is one of four states (and the District of Columbia) that not only recovered all private-sector jobs that were lost during the recession, but added new ones.

One of the state’s fastest-growing areas for job creation is the Eagle Ford shale, which cuts a 400-mile-long swath from Laredo to east Texas.  The initial Eagle Ford well was drilled in 2008. During the first year of production, oil output reached 358 barrels per day.  By the end of 2012, however, the figure was nearly 20 times greater – at 607,083 barrels a day – and oil and gas development in the area was supporting almost 100,000 jobs.

Located in one of the Eagle Ford’s busiest regions, Yorktown sits in DeWitt County, a little more than an hour’s drive east of San Antonio.  Downtown is all but abandoned, with tall weeds hemming in circa-1880 National Historic Register buildings.  An intact Fallout Shelter sign seems almost like an update, harkening as it does to mid-20th century America.

Although Yorktown isn’t attracting many new homebuyers, there’s a strong rental market.  One realtor recently rented 30 area homes to oil workers.  Other workers are living in campers and recreational vehicles on the outskirts of town.  It’s said that a good parking spot in the area goes for as much as $500 a month.

South and west of San Antonio, the town of Pearsall’s soft rental market has completely reversed.  Complexes that hovered around 85% occupancy before the Eagle Ford boom now have two- and three-year waiting lists, and rates have never been so high. A landlord whose 30 rental homes were mostly unoccupied has now leased every one of them.

The effect of the Eagle Ford development on Pearsall home sales has been equally impressive: a three-bedroom, two-bathroom house was sold 15 minutes after it was listed.  According to the real estate agent who handled the deal, the selling price was twice what it would have been before the drilling boom.

The Bakken shale spans from North Dakota to eastern Montana, then into Saskatchewan and southwest Manitoba. It’s believed that, by 2020, the Bakken may be producing as many as a million barrels of oil a day.

So it’s no surprise that towns in and around the Bakken are experiencing skyrocketing population growth from workers eager to participate in the profit-taking.  Many of these workers come from out of state: North Dakota leads the nation in net migration.

Not surprising, either, is the severe shortage of available housing.  A state study predicts that the population of western North Dakota, where the bulk of the oil industry is concentrated, will grow by 50% over the next two decades.  While the state suggests that job seekers don’t show up unless they have a place to live, that hasn’t capped the flow.  To keep up, “man camps” are being built to deal with the housing shortage.

Six miles from the town of Tioga, ND, is Tioga Lodge.  It’s a temporary compound of steel mobile homes, with the units all connected for added insulation during brutal North Plains winters.  Including the adjacent RV park, Tioga Lodge can accommodate 1,238 people.  As such, it’s the state’s largest man camp.

Researchers at the University of North Dakota have created a sort of workforce housing hierarchy.  The most elaborate modular camps, designated Tier 1, include amenities like catering and recreation.  They are managed by companies such as market leader Target Logistics – a Fortune 500 company that provides affordable housing for workers in remote, austere, or hostile environments.  RV park camps with a diverse range of units, masted electrical hook-up, and connections to water and sewage are designated as Type 2 camps. Camps without power or water in irregular settings are Type 3 camps. 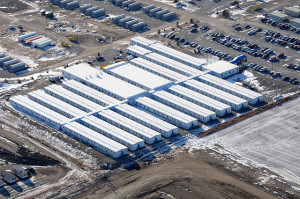 Target Logistics also operates two man camps near Williston, the epicenter of the Bakken boom.  According to Williston Economic Development, the city is the fastest growing metropolitan area in the nation.  Williston’s permanent population is 16,000; the city estimates there are 6,000 additional people living in and around the town in temporary conditions.

Williston and surrounding Williams County are working hard to keep up with the influx of workers and their families.  In 2011, for example, 534 single-family homes were built in Williams County, bringing in $72 million in local income and $3 million in local taxes, and creating 698 local jobs.  New residential (single- and multi-family) housing was the third-largest employer in the county with 1,383 jobs.

Additional permanent fixes are on the horizon as well. A private equity firm recently purchased the land to develop a community for 4,000 people.

Although it’s 1,500 miles from Bakken and nowhere near any other direct shale activity, Arizona’s real estate market has gotten an unexpected boost from North Dakota’s oil bonanza.  Because home prices in Phoenix and other cities are still low, North Dakotans whose businesses or land were purchased by oil and gas companies are heading south to warmer climes.  A suburban Phoenix real estate agent originally from Minot, ND, sold eight homes to former North Dakotans in recent months.

And in Houston, where numerous oil execs make their homes, sales of houses listed at $1 million or more were up 24% in 2012 compared to 2011.  According to public records obtained by the Wall Street Journal, the home purchased last year by a senior executive of a major oil and gas company tops out at more than 11,000-square-feet and has an elevator and pool.  The same company’s CFO purchased a nearby home, somewhat more modestly sized at 7,177-square-feet, for $3.2 million.  Overall, between February 2012 and February 2013, single-family building permits rose nearly 30% in Houston.

Throughout US shale drilling zones, housing solutions are a mixed bag.  For every master-planned community, it seems, there’s a KOA campground being turned into a makeshift man camp.

In the Eagle Ford area, eyes are on sustainable and affordable solutions for current residents and the permanent workforce.  Policymakers are recommending a combination of single-family and attached-family units, with suitable accommodations for transient crews.

Similar planning in other parts of the nation, particularly in small towns not accustomed to sudden population growth, will help solidify the positive effects of shale drilling on housing.