If you sat atop the world’s largest oil reserves, would you need to import gasoline?

If you’re Venezuela, the unfortunate answer is yes.

But your lack of refinery capacity – forcing you to bring in 83,000 barrels of gas per day to meet your citizens’ needs – would be the least of your energy-related problems.  You’d also be experiencing a serial decline in crude production:  Despite having oil reserves of 297 billion barrels, you’d only be producing 2.623 million barrels per day.  Your production is down from 2.99 million barrels per day in 2011 and 3.2 million back in 2005. 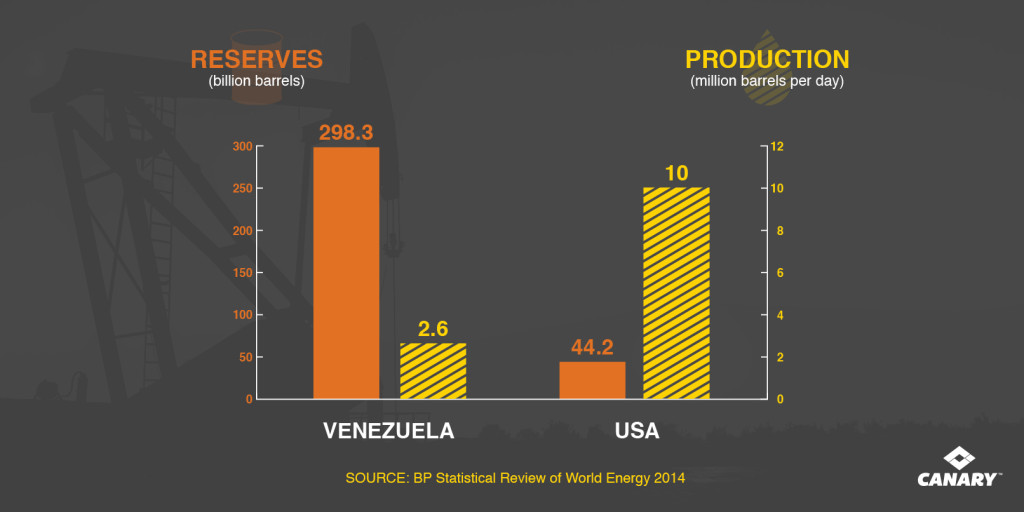 Because your petroleum products are so heavily subsidized, your state-run oil company wouldn’t make a dime on the approximately 800,000 barrels of gasoline and diesel that are consumed domestically each day.  To the contrary, the subsidized fuel would draw about $50 billion out of your national coffers each year.  (How significant are the subsidies?  Consider that a typical driver spends more to fill up once in Canada than Venezuelans do in a year.)  Figure in the fact that your neighbor, the Dominican Republic – where you’ve been sending highly subsidized fuel – is paying you back in black beans, and it all adds up to a financial collapse in the making.

As if all of these woes aren’t enough, Venezuela’s oil sales to the US are dropping rapidly as American production rises, growing 13.5% from 2012 to 2013.

In 2012, the US imported 12% of its oil from Venezuela, which amounted to about 912,000 barrels per day.  But with the boom in American shale, Venezuelan exports of crude and petroleum products to the US during the first 11 months of 2013 averaged just 792,000 barrels a day – the lowest annual rate since 1985.  Ironic, then, that Oil Minister Rafael Ramirez told reporters last June that the rising supply of US shale oil doesn’t affect exporters of medium and heavy crudes such as his country.

“Shale is a production of light crude and that doesn’t affect us as being big producers of medium and heavy crudes,” Ramirez said. “We have a big capacity to place our crudes, including the US market.”

Even if Ramirez has turned a blind eye to the decline in Venezuelan crude exported to the US, downward pressure on pricing – caused by the increase in North American supply and softening global demand – has to be top of mind.  As a member of the Organization of the Petroleum Exporting Countries, Venezuela has to meet membership obligations and adhere to group decisions, and it’s getting tougher.  Each OPEC member has a breakeven price at which oil must sell so the nation can balance its budget.  Some countries – like kingpin Saudi Arabia – have the financial wherewithall to withstand lower prices.  Not so for Venezuela, which needs high oil prices to cover domestic spending and offset falling production.  If the price of oil falls below $100 a barrel, Ramirez said that he would push for a cut in OPEC production to command higher prices.

In light of the US scale-back, Venezuela is increasing its oil exports to Asia.  This seems like a good thing, given that Asia’s energy demands are growing exponentially and looks to be a continued buyer in the long-term.  Except that one reason why China is taking so much Venezuelan oil – about 640,000 barrels per day – is because of a $50 billion debt to Beijing.  The Chinese government doesn’t want devalued bolivars, so it insists on half of the debt being paid back in crude instead.

It’s only because of the reduction in sales to the US market, which once took as many as 1.5 million barrels per day, that Venezuela can increase its shipments to China.

“Sales to China may be increasing,” noted Fernando Sanchez, vice president of the Society of Venezuelan Petroleum Engineers.  “But the company doesn’t earn money from them.  The US is where they sell oil for money.”

Venezuela has also upped its exports to India, another key growing energy market.  But Venezuela doesn’t have a corner on the market.  More and more exporters are earmarking Asia as a destination, which means Caracas has to sell its product at a discount.  For a country already in a fiscal free-fall, where inflation is 56% and billion-dollar debts have pushed international reserves to a 10-year low of about $21 billion, lower oil prices are just about the last thing Venezuela wants to contend with.

“Venezuela … cannot afford any sustained decrease in the price of oil,” says The Daily Beast’s Megan McArdle.  “They have spent every petrodollar they got, neglecting investment in favor of other projects.  With production declining they are absolutely dependent on scarcity pricing.”

Venezuela’s resource development history reaches back nearly 500 years.  The Spanish discovered oil “so plentiful it bubbled to the surface” at the time of the conquistadors who, of course, lacked the technology to do anything with it.  In 1539, they sent a barrel of Venezuelan crude to King Carlos I as a cure for gout.

The more recent discovery of vast reserves in 1914 and 1922 near Lake Maracaibo, an inlet of the Caribbean Sea that is considered the second oldest lake on earth, created the modern boom.  In 2010, Venezuela’s proven crude-oil reserves surpassed those of Saudi Arabia in 2010, making the country the world’s largest oil-reserves holder.

But, as Venezuela has proved, you can be resource-rich without being finance-rich.

Petroleos de Venezuela, SA (PDVSA), for example, manages to pull in about $50 billion per year.  This sounds like a significant amount – until you take into consideration that the figure represents more than 95% of Venezuela’s foreign earnings and isn’t, as Forbes columnist Christopher Helms points out, a lot for a country of 40 million to live on.

Especially a country already on a fiscal landslide.

The troubles noted above – exacerbated by the fact that about 100,000 barrels of oil are smuggled to Colombia each day – mean that only about a half of PDVSA’s production is actually generating cash flow.  This leaves little to finance productivity increases or the building of new infrastructure – both of which will be sorely needed if the plan announced by Venezuelan officials to increase production to 6 million barrels per day by 2019 is to be realized. PDVSA has said it will cost some $257 billion to pay for the construction of pipelines, storage capacity, and other field components in its new fields, chiefly in the eastern Orinoco River basin.

Foreign Woes in the Orinoco 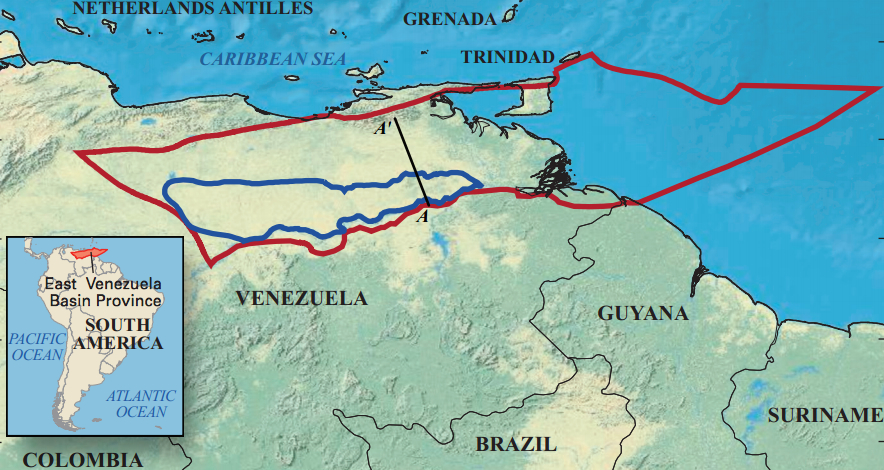 Venezuela’s Orinoco is one of the world’s largest deposits of petroleum.

Venezuela’s heavy oil Orinoco Belt, also known as the Faja, contains estimated oil reserves of 1.36 billion barrels.  PDVSA plans to invest nearly $200 billion in the Faja in two phases:  $24 billion through 2016 to expand existing upgraders (that take heavy oil and transform it into something exportable) and another $108 billion after 2016 on new upgrades and infrastructure.  The rest of the money will be dedicated to drilling wells and other underground operations.

In order to shoulder the financial burden of ramping up production in the Orinoco, PDVSA has taken on substantial foreign investment, which has come from minority partners comprising a veritable “Who’s Who” of international oil: Chevron from the US, Norway’s Statoil , China’s CNPC, and Spain’s Repsol YPF, among many others.

But despite being in a position of needing their help, PDVSA has a history of arrogance when it comes to  its dealings with its foreign partners.  The company has, at times, threatened to take away their licenses or stop them repatriating dividend payments – and even confiscated the assets of ExxonMobil and ConocoPhillips in 2012.

Foreign companies have complained about work in the Orinoco being held up by lack of infrastructure, uncertainty over taxes, delays in payments from PDVSA, and what they called the state-run company’s autocratic behavior.  In fact, Venezuela’s Malaysian partner, Petronas, bolted from the Orinoco development in September 2013.  And Russian Lukoil wasn’t far behind, exiting in October.

In response, the government has said it will allow foreign partners to assume a more active role in heavy oil joint ventures.  Caracas has even vowed to permit the international contingents more autonomy to make decisions on investments and operations.

While that salve won’t solve all of Venezuela’s problems, it is a step in the right direction – particularly for a nation that sits upon so much oil but is hardly sitting pretty.