What If We Had a War – and Nobody Fought?

Moving Away From Oil as a Proxy for War

What would happen if an aggressive nation decided to wage a war – and no one showed up to fight it?

That probably sounds like a ludicrous idea, but to anyone interested in peace and a better world, it’s an idea worth considering.

Now let’s take this scenario a step further: What if energy itself became the world’s most powerful geopolitical weapon, but it was used as a force for good? What would happen to the world’s balance of power, economic viability, and food security if energy could be used proactively to stop conflict as well as start it?

It’s an interesting proposition. The US now has the tools and resources to engage in active energy trade to the benefit of overall international affairs. We have the opportunity to use energy to protect ourselves (and our allies) from aggressive suppliers who fix prices or shut off supplies. We can support smaller countries with an alternate – and more affordable – source of their energy, enabling them to buy, sell, or develop their own resources while counterbalancing groups that steal energy and use it for malevolent purposes.

As Phillip Van Niekerk and Aaron Sayne wrote in the book Energy and Security: Strategies for a World in Transition, “Grassroots advocacy has spurred some reform and renegotiation efforts, as ordinary Africans demand to see more benefits of oil production trickling down. Several nations have also mounted ambitious, populist drives to boost local content in their energy sectors.” These efforts include transparency language in their laws and contracts, measures that will presumably open up opportunities not only for locals and foreign players alike.

For a newborn country like South Sudan, oil exports are a lifeline to economic independence. After a devastating 20 year-civil war with the northern Republic of Sudan that left 2.5 million people dead and millions more displaced, conflicts between the two countries continue to simmer. 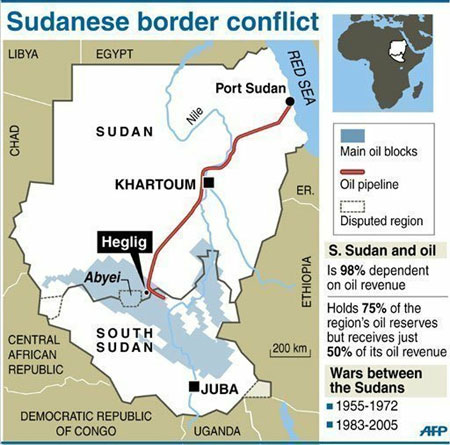 The landlocked South Sudan oil requires pipelines through Sudan – but that requires cooperation.

A mix of more than 60 ethnic groups and religious differences have helped the region earn a reputation for instability – and have fueled a pitched battle over oil.

And, it’s a complicated battle, to be sure. South Sudan has bountiful crude – as much as 3.5 billion recoverable barrels. The Republic of Sudan, by contrast, only has about 1.5 billion barrels – but it is home to nearly all of the region’s refineries and pipelines, including a key pipeline through which landlocked South Sudan transports its oil to export terminals at Port Sudan on the Red Sea. Armed conflict and disputes over oil revenue sharing have diminished crude production in both countries – so much so that Sudan proper, which had once been Africa’s second-largest oil producer, dropped to fourth in less than four years. The Republic of Sudan has lost 55% of its fiscal revenues and nearly two-thirds of its foreign exchange earnings since the country was split in two, while its crude oil export revenues fell from almost $11 billion in 2010 to just under $1.8 billion in 2012.

As of this writing, South Sudan is exploring options to bypass its northern adversary. Its government has announced it is planning on spending some $3 billion on a brand-new oil pipeline that will likely traverse Sudan and Kenya to the Indian Ocean. But that pipeline could just as well be a pipe dream, requiring massive outside investment that may not materialize.

Oil as a Proxy for War

You only need to look at examples like Sudan to realize that oil interests can corrupt. In the Sudanese case, complex problems rooted in long-standing cultural conflict in Sudan has led to a willingness to wage war over land and oil assets. Oil interests have compounded violence as money mixes with religious ideologies, opportunism, and profound narrow-mindedness.

All the while, international oil superpowers China and Russia have been contributing to the chaos. China not only acts as North Sudan’s chief diplomatic protector and ally on the UN Security Council (remember, the North holds all of the region’s pipeline assets), it also invests heavily in Sudanese oil. In fact, Sudan has been one of China’s largest oil suppliers for more than a decade. In exchange for oil, China outfits the Republic of Sudan’s military with Chinese-manufactured helicopters, planes, tanks, bombers, machine guns, and other material.

Meanwhile, Russia has for decades been advocating for the territorial “integrity” of northern Sudan – and, by extension, its government – even though Northern Sudan’s leadership is believed to support continuous violence and rebel activity in oil-contested regions of the south.

In addition to the help from China and Russia that has led to some nefarious practices, local levels of corruption were a barrier for business success in Africa. In the past, many Western oil majors have complained that bribes were commonplace, accepted (and expected?) as the way of doing business in Africa’s oil and gas trade.

The good news is that trends seem to be shifting.

Efforts to curtail corruption led to the US Foreign Corrupt Practices Act (FCPA) of 1977, which bars US companies from paying bribes to foreign officials to win business. Recently, enforcement of the FCPA has increased – largely in response to increased US involvement in the Sub-Saharan African oil and gas industry. Today’s changing business climate, coupled with with similar pieces of legislation in Europe and Africa itself, are making it increasingly difficult to play by these old rules.

Given some native producers’ interest in Western “good governance,” it is now possible to encourage multi-stakeholder agreements in Africa with transparency clauses. These agreements could usher in greater foreign cooperation and investment, reversing a decades-old trend of Western oil majors pulling out of sub-Saharan states like Sudan because of conflict and corruption risks.

These oil-related conflicts and abuses of power overshadow the fact that sometimes, in the right hands, oil can be used to promote positive changes, such as growth and economic equality.

Optimism in the Face of Crisis

As modern oil conflicts go, the two Sudans aren’t unique. African officials – along with governments in energy hotspots worldwide – recognize that oil, gas, coal, nuclear, and other fuels can be used as a strategic weapon or as a proxy for ideological conflict. This post focused on Sudan, and we have other posts that look at the Arab oil embargo of 1973, the current Ukrainian-Russian crisis, and terrorist groups like ISIL/ISIS in the Middle East.

And yet I remain optimistic.

Why? I believe that the forces closest to these conflicts will begin to “rein in” the most violent elements and rethink aggressive strategies when the economic consequences to them become very clear. Just look at Russia, for example, which has begun to feel the effects of Western sanctions and plummeting oil prices. Countries with extremely corrupt leadership need new leaders with greater interests in public and economic welfare, not only to clean house, but to promote better organization and deal-making to promote peace.

I recognize that America can’t always be the world’s policeman, and we won’t stop all conflicts on every continent simply by opening the spigots or exporting our resources worldwide. But what we can do is start changing the flow of investment, resources, and technologies to alter the energy calculus of the world so that power, security, and prosperity are no longer concentrated in just a few energy monopolies, but distributed much more broadly. We can be the ones who use oil and gas exports to help rebalance world economies and strengthen our own.

We can take a much more proactive, engaged economic role in world affairs. For example, if we begin a US-backed program of energy aid and trade, exporting our abundant shale oil and gas while assisting nations with energy-saving technology and natural resource development, the balance of energy power will shift.

Let’s not be naïve about this: The process of energy and economic rebalancing will take tremendous amounts of work. But if we’re willing to put forth that hard work, we will see a more prosperous world economy with more abundant energy resources – and we will begin to undermine the agenda to use oil and gas to promote violence.