We Got America Talking Crude!

Crude is crucial.
The crude oil export ban?
Not so much, many Americans agree.

You might say that crude oil keeps Americans on the go. From its role in the production of jet fuel, gasoline, diesel, and even asphalt, crude is necessary for moving us from Point A to Point B.

But what about its use on those cold winter nights when millions of us turn our thermostats up to a toasty temperature? With heating oil originating from the same barrels of oil as our gasoline –along with a myriad of other products – one thing is crystal clear: Crude is crucial.

Considering the tremendous role that oil plays in our everyday lives, Canary thought it would be interesting to test just how much the average American knows about this precious commodity. To get an idea, we conducted random face-to-face interviews with nearly 40 people from Texas, California, and Delaware. We questioned our Facebook community, too.

We asked people a variety of questions, such as:

What we found out is that most people we talked to have a basic understanding of some of the key uses for crude oil and how important it is for making many of the items we use every day.

You Know Where Our Gas Comes From

For example, 84% of our respondents were aware that the gas at the pump comes from crude. But only 21% knew that crude also helps to provide us with diesel fuel. In addition, 14% of interviewees knew the black gold we harvest from the ground helps to heat our homes, and 32% named crude oil as a feedstock for the production of plastics and tires. 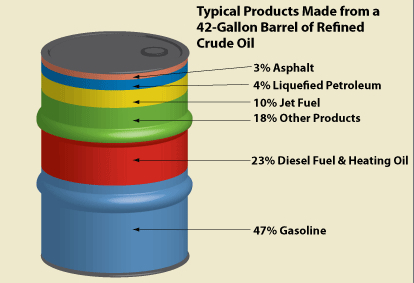 A barrel of crude oil yields a variety of different products.

However, where some of our crude comes from and the politics of how we handle our own homegrown oil is not as widely known or understood.

Only 23% of respondents knew that most of the United States’ imported oil comes from Canada. In fact, not only did several people not know that our neighbor to the north supplied more than 33% of our oil imports in 2013, but they were surprised to hear it.

“Canada? Really? I was far off,” said one Houstonian after guessing China as our No. 1 importer.

Even those who could name other top suppliers weren’t aware of Canada’s role in our oil supply. Take one interviewee from San Francisco who correctly identified our No. 2, 3, and 4 importers – Saudi Arabia, Mexico, and Venezuela, respectively – but left out Canada entirely.

When asked which country supplied most of our oil import, one resident of the City by the Bay responded, “Well, offhand I’d say somewhere like Saudi Arabia, but perhaps Venezuela or Mexico. But let’s say Saudi Arabia.”

Many people, 45% to be exact, guessed we import most of our oil from the Middle East region or from Saudi Arabia. Other folks named Mexico and Venezuela as our biggest oil suppliers – 21% were sure it was Venezuela while 5% thought it was Mexico. Although they didn’t nail the top spot, those respondents weren’t far off the mark. In 2013 Mexico supplied 11% our oil, claiming the No. 3 spot. Venezuela, at 9.8%, followed close behind at No. 4.

Saudi Arabia has long been recognized as a top player when it comes to oil production, and the Middle East region is widely known for its oil riches. Both of these reasons could explain why many Americans would identify that area as our top oil importer. Venezuela’s role in oil production has also been widely publicized in recent years, putting the South American country on many people’s radars when it comes to where oil is produced.

Let It Flow! vs No Go: Weighing in on the Crude Oil Export Ban

What is not on the radar for many Americans is the 40-year-old crude oil export ban that prevents American oil companies from exporting domestically produced crude overseas. In effect, the US is cut out of one of the biggest and most lucrative global markets on Earth. Although only 27% of our face-to-face interviewees were aware of the ban, most of them had strong opinions about whether it was good for our country, our oil resources, and our economy. Overall, 45% said we should keep the ban, 32% said it should be repealed, and 23% were unsure. What’s most interesting, however, is why the respondents answered the way they did.

“I think [the US export oil ban] is a bad idea for free trade,” said an interviewee from Middleton, Delaware. “Oil is a commodity, and it’s a buyer’s market and the market is opening up.”

A Houston resident said the export ban hindered trade: “It limits our trade partners, so I don’t think it’s a good idea in that respect.”

Of course, those in the keep-the-ban camp expressed different views.

“[The export ban] is a good idea so that we become more energy-independent and oil companies are not driven by profits to sell it outside our country,” said a respondent in Wilmington, Delaware. “We won’t be beholden to the Arab countries.”

We were also interested in why people thought the ban was in place. Several folks we spoke with and who commented on Facebook – 47% to be exact – said it was to protect our nation’s oil resources. Many people said that our oil resource were in limited supply, including one interviewee from Houston. Yet despite his belief that “Oil is scarce,” he said that didn’t justify keeping America on the sidelines of the global oil trade.

“It’s not really a good idea,” he said of the ban. “Since it’s a free market, we should just let [crude oil] come in and out.”

An interviewee in San Francisco speculated that the government wants to limit drilling, hence keeping the ban in place: “Perhaps they don’t want over-drilling, [just] enough drilling for domestic purposes. Or perhaps they want to build a reserve so if there’s a world shortage, there’s a domestic reserve to tap into.”

Several respondents mentioned maintaining oil reserves as one of the reasons why the government has kept the ban in place.

“Maybe [it is] to preserve sort of a storehouse, [to have] a source of oil if our imports are no longer a viable option,” said an interviewee in San Francisco.

Finally, another 11% of respondents questioned why the US would even consider exporting its crude oil when it still imports the product from other countries. (The answer: The oil we’re producing is light, sweet crude. Currently, our refineries are configured to process heavy oil, which we still need to import.)

The US is exporting a lot of energy – just not crude oil.

Prices at the Pump Could Go Down

But no matter why folks think we have a crude oil export ban or whether or not they believe it’s beneficial for America, the reality is that crude oil production affects every one of us each time we fill up our gas tanks.

With that in mind, we asked people if they thought removing the ban would mean relief or more pain at the pump. Interestingly, 29% were unsure, but 42% of face-to-face respondents reasoned that removing the ban would drive gasoline prices down. Most of them were unable to pinpoint why, but a man from San Francisco made his best guess.

“I assume that we’d be paying less [for gas], but there are so many different subsidies and stuff that I’ve looked into that go into the processing [of crude oil], so I’m not sure,” he said.

On the flip side, of the 29% of respondents who speculated lifting the crude oil export ban would increase our gas costs, more of them were able to explain their thinking.

“I think [the price of gasoline] would go up,” said an interviewee from San Francisco. “If we’re already paying to import oil and we have a limited amount here that we’re then exporting, unless we’re paying or charging a really high premium when you buy it, I think it would go up.”

A respondent from Houston also predicted an uptick in prices should the US begin to export its crude, citing the law of supply and demand: “I think it’s going to go up because if we’re going to export it outside that would mean less oil in the US. With less supply, the price goes up.”

The fact is that experts are predicting as much as a 12-cent-per-gallon price reduction at the pump if the crude export ban is lifted. This is good news for American drivers, no matter where they’re from.

Are You Ready to Get in on the Conversation?

Ready to talk crude yourself?

To learn more and get in on the conversation, see our exhaustive list of what key figures think about lifting – or keeping – the crude export ban.

Read our Special Report on how lifting the crude export ban will affect the price of gasoline.

And help Unleash America’s Energy by signing our petition to lift the ban.