California Shale Oil: Will the Hype Produce the Results?

It’s been called “an opportunity we can’t miss.”

It’s been promised to be the thing that will “single-handedly” turn California’s economy around, increasing state and local tax revenue by $4.5 billion and bringing in some 2.8 million jobs by 2020.

It’s the much-hyped California shale oil boom, and it has arrested the nation with its allure.

Seeing current examples of the benefits of shale in other states across the country – including North Dakota, where its Bakken shale formation has helped drive the state’s unemployment rate down the nation’s lowest level at 3.2% and pushed per-capita GDP 29% higher than the rest of the country – many hope that California can produce similar, if not even better, results with its Monterey Shale formation.

We have ooh’d and ahh’d over the tantalizing descriptions of this expansive geological formation, encompassing 1,750 square miles from Los Angeles to San Francisco and promising as much as 15.4 billion barrels of oil.  To put that quantity into perspective, it’s more than double the amount estimated in the Bakken and more than five times the amount in the Eagle Ford of Texas.  All told, the Monterey could hold more than half of the undeveloped, technically recoverable shale oil resources of the continental United States.

This, the President says, could finally help put our country in “control of our own energy future” and reduces our dependence on foreign oil.  Unfortunately, to date, the California shale oil boom has been all hype and no results.  Between strict environmental regulations, disappointing drilling results, and a technological shortfall, the shale revolution in California seems stalled.

Some would say that California’s greatness was achieved thanks to oil.  For more than 100 years, the state has consistently been one of the top producers of oil.  All the way back in the late 1800s, the state became a worldwide oil producer with its oil fields spread throughout the Los Angeles Basin, necessitating the development of the Port of Los Angeles to ship crude oil overseas.

Since 1861, about 96 oil and gas fields have been discovered across the state, with 66 of these fields having an ultimate recovery greater than 1 million barrels of oil.  In fact, Southern California has produced more oil per acre than any other place in the whole world – including Saudi Arabia.

Those energy regulations are likely tightening even further, and the impact is making it very difficult for producers to recover oil from shale formations.  Some of California’s politicians and environmental groups aggressively oppose the shale oil technological breakthrough of hydraulic fracturing (or “fracking” as it’s often called), the technique that has driven the shale boom across the country by blasting a mixture of water, sand, and chemicals at a high pressure to release the trapped resources and significantly boost production.

The anti-fracking crowd calls for a statewide ban on the technique.  It makes several arguments against the use of this technique in California – including the potential to trigger earthquakes, the strain on the state’s already-dwindling water supply, and the risk of contaminating drinking water – all of which have been refuted time and time again by noted experts:

Unfortunately, the anti-fracking contingent’s arguments, based on misinformation and fear-mongering, have earned them a lot of press and quite a public following.  Perhaps Stanford University economics professor Frank Wolak summed it up best when he said that environmental concerns over fracking are “not based on experience or scientific evidence, but emotion.”

Despite the evidence, California recently proposed new fracking regulations that officials hail as the “strongest” in the nation.  The new regulations would require developers to get state permits, test groundwater supplies, and notify neighbors before conducting fracking and related techniques. Developers and fracking proponents worry that these strict requirements will hold California back and prevent the state from experiencing its own shale boom.

While activity in the Monterey is still in its early stages, one thing that’s been lost in the argument over environmental regulations is the fact that oil and gas companies have reported disappointing drilling results to date.

Chevron’s Kurt Glaubitz expressed the company’s displeasure with its findings:  “Based on our drilling results, our view is that the oil has migrated out of the formation and is now found in pockets outside of the Monterey shale… We don’t believe it’s going to compete for our investment.”

Venoco, an independent that held the second-highest amount of acreage in the Monterey Shale formation, experienced similar disappointment. The company found its early wells to be “uneconomic” and it moved to sell off its holdings in the early part of 2013.

Jason Marshall, the California Conservation Department’s chief deputy director, believes that the fallout from earthquakes over time has left the Monterrey disjointed and unpredictable.  “It may take an advancement in technology or methodology to unlock the oil production potential of the formation,” Marshall said.

Analysts agree.  The oil is still there, they contend, but it will come down to finding an economically feasible way to extract it.  “Here’s this obviously well-known, very rich source rock,” said Pete Stark of the consultancy IHS Energy.  “If we can crack the code on getting into new and unconventional parts of the Monterey, maybe we have a huge new bonanza on hand.”

Despite early disappointments over limited recovery, many oil and gas analysts caution that it’s still too early to write off the Monterrey. “It’s not conclusive that the emperor has no clothes,” Oppenheimer senior energy analyst Fadel Gheit acknowledged.

Several oil companies are banking on an enriching future of California shale, gobbling up acreage across the Monterey and intensifying their exploration efforts within the region.  Private landowners are also getting caught up in excitement, with visions of signing bonuses and royalties in their futures. 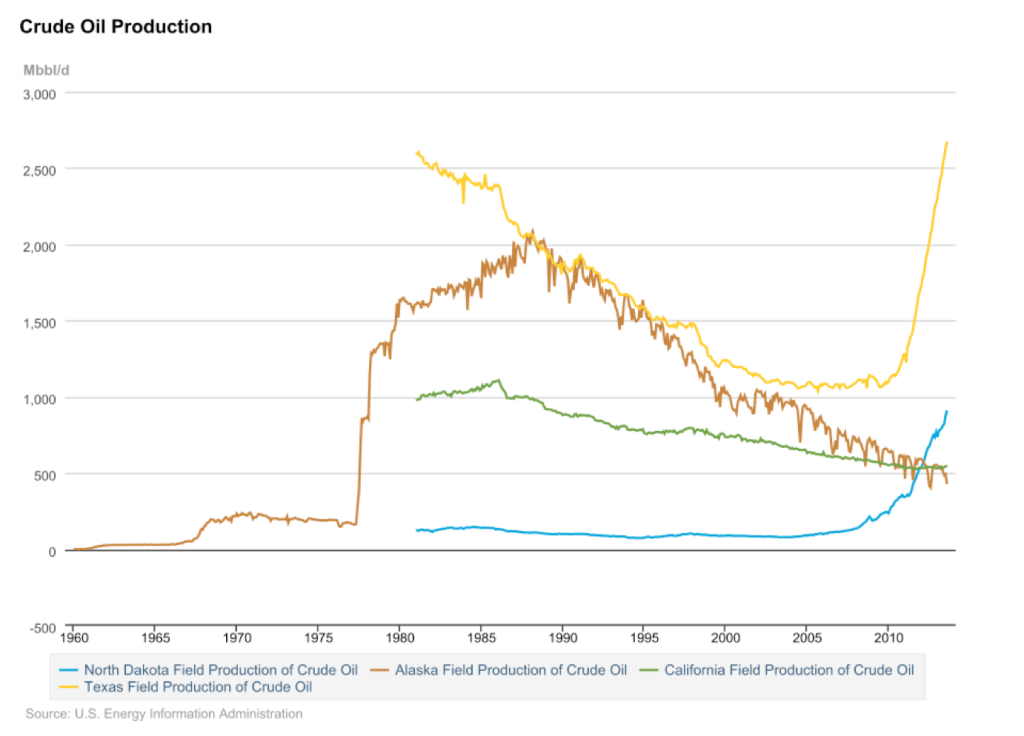 California oil is still a very prominent player in the energy marketplace.  It retains its place in the top-5 oil producing states, currently ranking 4th behind Texas, North Dakota, and Alaska.  For now, the state’s shale boom is little more than a wait-and-see promise – but the trajectory of advancements in drilling technology could be an indicator that this promise can be kept.  “There are some pretty creative people in this industry,” said Stephen Trammel, energy research director at HIS. “I’d say they are going to figure it out.”