Although experts may have reservations about predicting the longevity of natural gas and oil shale plays, there’s no doubt that the demand for hotel rooms near drilling sites has the hospitality industry convinced of the energy boom’s staying power.

From Marcellus to Bakken to Eagle Ford, neighboring hotels are often overbooked – even occupied beyond capacity – with energy workers, from loggers to lawyers.  Major companies rent blocks of rooms for weeks on end, propelling lodging occupancy stats far above the September 2013 nationwide average of 63%.  As a result, local economies are growing, and hotel developers are scrambling to build new accommodations.

The 170-room McClure Hotel in Wheeling, West Virginia, tells a typical tale of Marcellus-driven growth.  In 2010, occupancy hovered around 40%.  Less than 18 months later, the rate was 75%.  Some nights, the house is completely full.  The property’s general manager attributes the turnaround to one factor: natural gas drilling.

It’s the same story 15 minutes away in St. Clairsville, Ohio. During the three-month period from July-September 2011, a survey of seven area hotels revealed a 93% occupancy rate, compared with 75% for the same time just one year earlier.

And in a four-county region in northeastern Pennsylvania, growth in lodging demand has outperformed the nation as whole in every year but one since 2008. Cumulative occupancy in Bradford, Lycoming, Susquehanna, and Tioga counties has risen from a sluggish mid-50% rate pre-2007 to more than 70% in 2011. Better still, between 2008 and 2011 two key indicators of hospitality financial health were up significantly: revenues per available room and average daily rates increased at an annual pace of approximately 14.8% and 7.8%, respectively. During the same period, those metrics fell 1.7% and 0.7% for the national hotel segment overall.

Simply put: not only are there more rooms sold, they’re selling for more money. 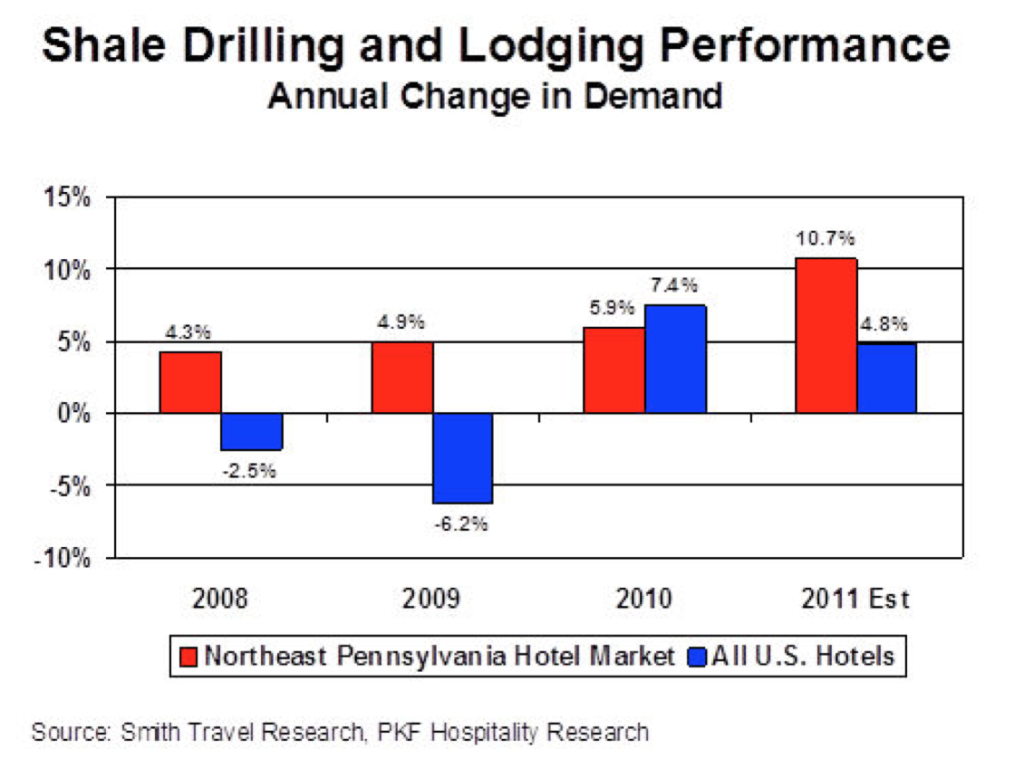 But Marcellus isn’t the only hospitality hot spot.

At Motel 6 and Studio 6 franchises in Midland and Odessa, Texas; Miles City, Montana; and Bakersfield, California – all located near shale deposit drilling sites – more than 80% of occupancy is associated with oil or the oil shale gas business.  Likewise, Microtel Inn & Suites in Dickinson, Lewiston, and Minot, North Dakota, are 70% to 90% full, night after night.

Beyond adding dollars to hotel company coffers, higher occupancy rates provide an economic bonus through hotel taxes funneled back into local communities. In Pennsylvania, hotel tax receipts must by law be used to promote tourism and build public venues.

Take Washington County, part of the Pittsburgh metropolitan area.  Between 2007 and 2013, hotel occupancy rates posted gains from the mid-50% level to the low-70% range.  Washington County’s 3% hotel occupancy tax brought in $1.1 million in 2010, double the collection in 2006.  The Washington County Tourism Promotion Agency is the biggest beneficiary of the increase.  For starters, the money will defray the costs of building exhibition and meeting space at the county fairgrounds, help renovate the field where the minor-league Washington Wild Things baseball team plays, and advertise tours of historic homes and area museums. That’s a lot of bang for the oil-boom buck.

The raw numbers are smaller in Tioga County, but the proportion is significant.  Hotel tax revenues there jumped 38% in one year, reaching $365,000 in 2010 from $264,000 in 2009.  In Bradford County, where the county commissioner told a state Senate panel in 2009 that hotel rooms were scarce because of shale drillers, hotel tax revenue climbed 65% between 2009 and 2010, from $158,457 to $262,600.  In Fayette County, the hotel tax brought in $858,147, a more than 60% increase from 2008.  The influx has allowed the Laurel Highlands Visitors Bureau to give advertising and construction grants to nonprofits that cater to tourists, propping up another regional income stream.

Lawrence County was one of the last places to be explored along the shale play.  Although the county budget reflected an expected $60,000 in hotel tax revenues for 2012, the actual number turned out to be nearly double that. As a result, tourism promotion that was slashed by budget-cutting at the state capital has been restored.

More Rooms at the Inn

In the hospitality business, counting “heads in beds” is a gauge of success.  With that numbers game achieved, hotel developers and investor groups are in the enviable position of having to increase their inventories.

Not to be outdone are Texas hotels. In the Eagle Ford shale region, new room construction rose 5.1% between the first quarters of 2011 and 2012, but there’s still a struggle to keep up with greater demand.  Perhaps more indicative of market strength, though, is the May 2012 listing of top-performing hotels.  Thanks to Eagle Ford activity, coming in 19th place was the Holiday Inn Express in Cotulla, a 79-room hotel that had been open less than a year. In Cuero, 150 miles away, the Best Western Park Heights shot up an astonishing 144 slots to finish 34th.. 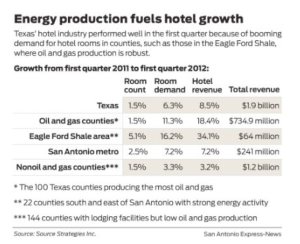 Aside from the obvious – proximity to work sites – how does a hotel play to an oil and gas clientele?

A Houston-based developer thinks he knows.  He’s built The Derrick Lodge, described as “a new hotel concept,” in Crystal City, Texas, the heart of the Eagle Ford Shale.

The property includes 50 oversized interior corridor guest rooms with a bedroom, living room, and dual workstations.  But what truly differentiates it are the 40, 437-square-foot garages with keypad access for workers to store their trucks, tools, and equipment.

At Shale Hotel Inc., reconfiguring amenities at existing properties is winning over the niche market.  Heating lamps and winterized chairs accommodate smokers outside their hotels.  At one property, a guest room has been remade into a mudroom where workers can shed their work clothes and enter the hotel with clean shoes.  When the company president learned that a nearby hotel was asking rig workers to leave their mud-coated boots in the lobby, he rebranded the Bentleyville, Pennsylvania, Best Western as the “the Best Western Garden Inn where you can wear your boots.”  He also installed boot-washing stations outside, where workers returning from the field can hose off their gear before entering the property.

Sustained Growth on the Table: Restaurants Are Beefed Up, Too

It’s no surprise that the way to a driller’s heart might also be through his stomach.

The food never seems to stop at either the Best Western Garden Inn or Holiday Inn Express in Bentleyville. Because rigs operate on unorthodox schedules, breakfast is served from 3:00 to 10:30 a.m. then starts up again at 3:00 pm. In the early afternoon, there’s soup and popcorn in the lobby, followed by happy hour and beer, wine, and cheese receptions.

Exactly how much job growth in food services is directly tied to oil and gas activity is difficult to pin down.  But this is known: while overall US food service employment was relatively flat between 2011 and 2013, during that same period states like North Dakota, Ohio, Pennsylvania all added jobs in the leisure and hospitality segment, which is where the Bureau of Labor Statistics places food services.

And there’s plenty of anecdotal evidence to support the notion that drilling is having a positive effect.

In the Youngstown, Ohio, area, restaurants of all types are reporting an upswing in business related to the drilling industry.  The manager of a Ponderosa Steakhouse says his restaurant is serving 30 to 40 extra people per day, most of them providers of auxiliary services to drilling operations.  The co-owner of Gionino’s Pizzeria has also noticed a spike in business – mostly from deliveries to local motels occupied by drillers.  At Jimmy’s BBQ, the volume from the lunch crowd and deliveries to local oil derricks often catches the staff off-guard: this mom-and-pop operation has occasionally closed at 6:00 pm because it ran out of food.

Although it hasn’t reported a dearth in Big Macs, the McDonald’s in Williston, North Dakota, has experienced a shortage of workers.  So much so that, in 2012, it announced it would pay new workers $15 an hour – plus a $500 immediate signing bonus and full medical benefits.

Even in far-off New Auburn, WI, more than 700 miles from Williston and the heart of the Bakken action, the effect of the shale boom has percolated to a downtown diner. Wisconsin doesn’t have any oil or gas production, but it does mine quartz sand, one of the essential elements used in hydraulic fracturing. Since 2007, more than 40 frac sand mines have either opened or expanded their operations in Wisconsin and neighboring Minnesota.   The owner of New Auburn’s Sunshine Café’ says mine workers coming off the night shift help fill tables at breakfast.

And while the Shale Hotel Inc. people have talked about creating a signature drink, the Palazzo 1837 Ristorante in Washington, Pennsylvania, has beaten them to the punch with a beverage called the Marcellus Shale.  Made with orange liqueur and bourbon, it’s described as cloudy, like frac water – which seems ironic, given how bright the future is for lodging and restaurants in the area.