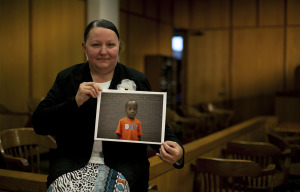 For Diana Burton, one of the best things about volunteering for Court Appointed Special Advocates (CASA) is the opportunity to offer hope to a child.

“All children deserve and want to be loved and they want to be part of a family,” said Burton, who has volunteered for CASA of Oklahoma Country for about five years. “As an advocate for them, I know that I can help fan that hope.”

Burton, and the other trained court-appointed volunteers with CASA of Oklahoma County, advocate for the best interests of abused and neglected children in the Oklahoma County juvenile court system.

These volunteers, who must complete 30 hours of training, serve as the eyes and ears of the court – and as a safe source of support for the children assigned to them. Their job ranges from gathering information to testifying in court, helping children understand what’s happening to making sure court orders are carried out.

Time to Step Out

Burton first heard about CASA of Oklahoma City through her local newspaper.

“I wondered if this was something I could do,” she said. “At that time, my children were younger, so it was just a thought on the back burner. Around five years ago a friend called and asked me if I would be a reference for her to become an advocate with CASA of Oklahoma County, and I knew that the time was right for me to step out and make a difference for children in foster care.

“I chose the CASA program because I liked the fact that while being a mentor for children, I could also provide a voice for those same children in the court room, and advocate for services needed in order for these children to lead full, productive lives.”

Burton has handled numerous cases since she began working with CASA of Oklahoma City – including two that required more than 1,000 days of work. One case ended in a happy adoption, she says, and the other, as of Burton’s interview, had not been resolved yet.

“What keeps me going is knowing that for these children, I’m usually the one constant person in their lives,” she said. “For the case ending in adoption, the children were moved so many times between foster homes and shelters. They always seemed relieved to see me.

“On the case I have now that has gone on for more than a thousand days, I have an 11 year old boy who tells me, ‘I’ve been missing you’ if I go longer than two or three weeks without seeing him. That’s a great motivator! I also have very wonderful CASA supervisors who have always been there when I have questions or when I just needed to unload on someone.”

These days, Burton has a total of four cases with CASA of Oklahoma County involving 10 children. She also works as a part-time nanny, is married and has older children living at home while they work and attend college part time. In addition to all of that — and her efforts to cook nightly dinners for her family — Burton attends school one night a week, loves to sew, and leads the hospitality ministry at her church.

“I love to be busy, and although it sounds like I have a lot going on, I do still have plenty of time for my CASA cases and the children I serve,” she said. “I can make visits on the two or three days a week that I’m not playing nanny, and I don’t mind making visits on the weekends. I have a very awesome husband and children who stand behind me and encourage the work that I do for CASA. Their help with other things I am involved with gives me plenty of time for my cases.”

Ultimately, Burton says, she feels good knowing she does the best she can for the children she works with through CASA.

“It’s rewarding also just to hang out with your CASA kids, knowing that they are happy and content, and that they have every opportunity to make something great out of their lives.”

CASA of Oklahoma, a nonprofit organization, relies entirely on volunteers to operate. Canary LLC, which also has offices in Oklahoma City, is a strong supporter of CASA’s efforts.

For more information about CASA of Oklahoma County, visit http://okcountycasa.org/