In early August, when the Singapore-flagged tanker BW Zambesi left Texas City, TX, for South Korea with $40 million worth of minimally processed condensate aboard, it signaled a major departure from an American energy policy that many consider as outmoded as the leisure suit. 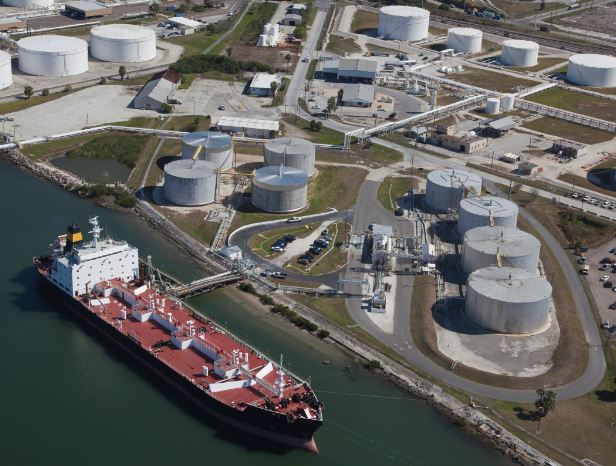 The first US export cargo of condensate in 40 years shipped from Texas this summer.

Since the mid-1970s, the US government has banned exports of domestically produced crude oil. The ban was a reaction to price shocks that accompanied the Arab oil embargo. The idea was that any oil we could produce here should be used here, giving us a buffer against the whims of the Organization of Petroleum Exporting Countries (OPEC) and its petro states.

Over time, exceptions to the ban have allowed the export of some domestic oil. Such exceptions include crude produced in Alaska’s Cook Inlet, oil that travels through the Trans-Alaskan Pipeline, oil sourced from certain fields in California, and oil shipped to Canada for domestic consumption.

Still, the amount of crude exported by the US amounted to just 8.938 million barrels (or about 296,000 barrels per day) during May 2014 – with nearly all of it heading north to Canada.

Exports in June, however, reached about 390,000 barrels per day – an increase of approximately 35% over the May daily tally. In fact, the June numbers represented the highest US export total since the 1950s. This statistic meant that we exported more crude that month than Ecuador, the smallest OPEC producer.

So what gives? Is Canada suddenly thirstier than ever for US oil?

The Case for Condensate

Actually, the export gains are the result of a slight fissure in the export ban that is allowing more crude to leave the US for foreign shores.  Not all forms of crude, mind you, but a minimally processed ultralight oil called condensate – the very type that traveled to South Korea on the Zambesi.

Crude oil coming out of the ground (or ocean floor) is not a uniform product. Different areas of the world produce oil with different properties, including API gravity, which is a measure of how heavy or light the crude is. Some crude oils can easily be refined into gasoline; others are more suited for use as chemical feedstock. (Confused??? Read all about crude differences in our post “Light on the Top, Heavy on the Bottom: A Crude Oil Refinery Primer.”)

Condensate, which is tapped in abundance from shale formations, is currently being extracted to the tune of about 750,000 barrels per day.  Condensate is actually a gas that condenses into an ultralight oil that refiners blend with heavier crudes to make them easier to refine. 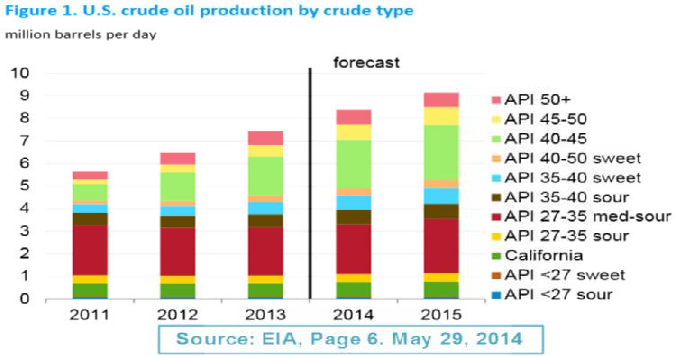 Anything above the blue line is considered very light crude oil.

Because so much of the present US oil boom already involves light oil, there’s not a lot of heavy oil to add it to.  And although producers have found new markets for this condensate in the chemicals industry, resulting in a boom in American job creation, there’s still a product glut.  In addition, many US refineries – at least those along the Gulf Coast – aren’t configured to process condensate.  With US refineries already running close to capacity, they simply can’t ramp up to absorb all the light oil and condensate that’s being produced.

This, of course, makes condensate a prime candidate for selling abroad.  And in June, the Commerce Department allowed Eagle Ford operators Pioneer Natural Resources and Enterprise Products Partners to do just that.  The Commerce Department agreed with the firms’ position that, because condensate is minimally processed through stabilization and distillation, it’s not technically crude oil but a product – which would make it exempt from the ban.

Yes, this determination is actually a keen way of redefining crude.

And yes, the decision applies only to condensate.  The ruling doesn’t signal that the federal export ban in its entirety will be lifted any time soon.

But from tiny cracks, large fractures can come.

That’s why the Commerce Department’s move is seen as an entry point to ending crude export restrictions altogether.  That change seems particularly timely as national supply worries have largely disappeared since fracing made the US an energy production powerhouse.

Energy companies appear eager to get the same green light that Pioneer and Enterprise did.  In anticipation of such approvals, Houston-based Plains All American indicated in July that it may build new condensate-only pipelines in the West Texas Permian Basin to keep up as output increases.

Support for lifting the crude oil ban is coming from all corners, not just oil companies.

At the US Energy Information Administration’s 2014 energy conference in July, John R. Auers, executive vice president of Turner, Mason & Co. Consulting Engineers, Dallas, said the day will come when our crude production exceeds refinery capacity to the point that prices will become heavily discounted to comparable overseas grades. When that happens, producers will stop increasing production, drying up our supply of light crude and making us more reliant on foreign exports.

Daniel Yergin, vice chairman of consultants IHS Global, agreed.  During remarks at the conference, Yergin said, “The rationales for a crude oil export ban are gone, but the ban is still in place. Lifting the ban on crude oil exports would signal the US government’s commitment to global markets and energy security. The US has preached to other countries for decades about the need for free flow of resources. How can we say to Japan that it can’t import any of our LNG but must not buy Iran’s oil?” 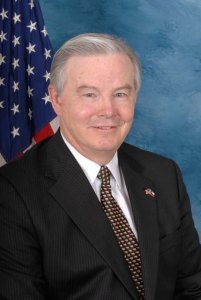 And even though his sixth Congressional district is several hundred miles from Texas’ Eagle Ford and Permian shale-producing regions, senior lawmaker Joe Barton has announced that he’s in favor of lifting the ban. In fact, Barton plans to introduce a bill in support of repeal, although he told us the timing is unclear.

“The shale revolution has drastically reshaped America’s energy landscape, unlocking a vast supply of untapped oil and gas,” Barton told us in an email.  “The most recent estimates show that the US has more than enough resources to meet our domestic energy needs.  In order to take full advantage of this opportunity, we need to rethink outdated laws that were passed during an era of energy scarcity, which is why I am in favor of overturning the ban on crude oil exports. The rewards are expansive.  Recent analysis confirms lifting the export ban would spur economic growth and create hundreds of thousands of additional jobs, while at the same time lowering prices at the pump. It would also diversify the world oil supply – strengthening US energy security and giving us more leverage in foreign policy matters.  The US has long been committed to free trade and open markets; it’s time we practice what we preach when it comes to energy.

“Pressure to remove the ban on crude oil exports is growing from both ends of the political spectrum,” Barton added. “I predict that no matter which party controls Capitol Hill or the White House, the ban will eventually be lifted for the same reasons Congress eventually overturned other failed government efforts to regulate energy price and supply.”

South Korea and Mexico Cheer Us On

While reversing the ban remains the topic of bipartisan debate, the US is under mounting pressure from South Korea and Mexico to make the move.  The two nations, buoyed by the approval of the condensate shipment, have joined the European Union in urging the US to ship crude oil overseas.

South Korean President Park Geun-hye told a delegation of US lawmakers from the House Energy Committee that getting their hands on the ultralight crude coming from states like Texas and North Dakota was a priority.

Mexico is also hoping for the Commerce Department to approve possible shipments, while the EU is pushing for oil and natural gas exports under the still-unfolding Transatlantic Trade Investment Partnership.

This means that condensate may have opened a crack through which a lot of crude will flow.

Congressman Joe Barton has represented the Sixth District of Texas since 1984. In 2004, he was selected by his colleagues to be the Chairman of the House Committee on Energy & Commerce, the oldest standing legislative committee. Barton is currently the senior Republican and serves as Chairman Emeritus of the full Energy and Commerce Committee. Barton is a graduate of Texas A &M University who earned his Master’s of Science degree in Industrial Administration from Purdue University. As a member of the prestigious White House Fellows Program, Barton served as an aide to then-Energy Secretary James B. Edwards. He was also a natural gas decontrol consultant for Atlantic Richfield Oil and Gas Company.