A Massachusetts Politician Telling Texans What To Do?? Senator Markey, Drop Your Opposition to Repealing the Crude Export Ban!

The last time US oil and gas companies were legally allowed to export crude oil, animatronic sharks plied the waters off Martha’s Vineyard during the filming of “Jaws,” Muhammad Ali toppled George Frazier in the legendary “Thrilla in Manila,” and the must-have holiday gift was the easy-to-care-for and infinitely loyal Pet Rock (this was pre-Internet – people apparently were more imaginative back then).

The year was 1975. The nation was determined, to paraphrase The Who’s rock anthem, not to get fooled again. Still reeling from the effects of the oil embargo by Arab nations – a ploy that sent global oil prices soaring and made it a struggle for most Americans to fill their gas tanks – Congress passed the Energy Policy and Conservation Act, which banned domestic oil exports (except to Canada). US production had begun a precipitous fall from its 1970 peak, and the thinking was that, for the sake of energy security, it was better to earmark home-grown production for home use rather than allow it to be traded on the international market. 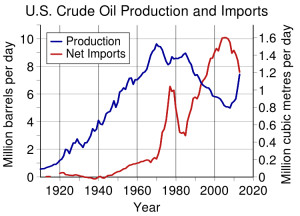 US crude trends show our imports plummeting as our production soars.

But a funny thing has happened in the 40 years since the ban was enacted: Thanks to the twin technologies of hydraulic fracturing and horizontal drilling, the US has been coaxing oil out of formations that had previously been inaccessible. As a result, we’ve got a surge in domestic production that has exceeded most expectations. In fact, in 2013, for the first time since 1996, the US produced more oil than it imported.  This has generated enthusiasm in many corners for casting off our energy scarcity mindset and convincing Congress to repeal the crude oil export ban. Proponents say that selling our oil in the world marketplace will create multiple economic and geopolitical benefits, from more stability in the global price of oil and lower gasoline prices for Americans to greater leverage among trading partners.

In fact, there’s even been a slight crack in the ban in recent months. In July, the Obama administration allowed two Texas companies to ship an ultralight crude oil known as condensate to overseas markets.

This did not please Sen. Ed Markey, D-MA.

Like a parent trying to control a willful toddler, Markey, who chairs the Senate Foreign Relations Committee’s subcommittee on international energy and climate change, called for a “timeout” – a break during which the nation could debate “whether we want to be energy independent or not.”

For decades, everyone from economists to political strategists has ballyhooed the notion of American energy independence. Finally, because of shale development, that ideal is within reach. But, somehow, Markey believes that being independent from hostile and unpredictable regimes with both the power and will to literally hold us over a barrel might not be a good idea.

Sure, Markey isn’t the lone voice against lifting the ban. But his ranks are diminishing, on both sides of the aisle.

One concern among the Markey camp is that lifting the ban means drivers will pay more for gas. But this is a fear that many economists and other smart people dispel. Lifting the ban will have the opposite effect, they say. By encouraging even more oil production, prices at the pump will actually fall.

How much? Well, energy analysts at IHS Global, for one, project that once the ban is repealed, fuel prices will decline to the extent that US motorists should save $265 billion between 2016 and 2030. As a result of the additional crude oil supply, gasoline prices in the US would drop by an annual average of 8 cents per gallon. Because US gasoline is part of a globally traded gasoline market, prices at the pump reflect global prices. By discouraging additional crude oil supplies from being brought to market, the current policy is actually making gasoline prices higher than they would be otherwise.

And we’re not likely to run out of gas – the ban didn’t extend to refined products, including gasoline and heating oil, so we’ve been exporting that all along. In fact, the US is now one of the world’s largest gross exporters of refined oil products, sending roughly three million barrels overseas per day.

How else can we convince the nay-sayers like Sen. Markey?

Well, how about this? Groups like the Council on Foreign Relations and influential media including the Washington Post and The Wall Street Journal have come out in favor of repealing the ban as a way to further improve the American economy while increasing energy security.

In its May 2014 report, IHS suggested that dropping the ban would add more than $1 trillion to government revenues through 2030 and add an average of more than 300,000 jobs a year. More specifically, IHS said that allowing American producers to sell light crude abroad would lead to a total of $746 billion in additional investment in US production infrastructure during the 2016-2030 study period. Production would grow by 1.2 million barrels of oil per day, IHS added, and the economy would add an average of 394,000 US jobs per year to support all of the increased activity. IHS also anticipates geopolitical and energy security benefits accruing if export restrictions are removed, with the US taking on the role of a stable new supply source to offset trouble spots like Iraq and Libya.

The Council on Foreign Relations agrees. They say that the expansion of domestic oil fields and transportation associated with the freedom to sell oil abroad would be a boon to the US in case of a disruption in global oil trade. And, simply speaking, any increases of oil production in North America or other politically stable areas of the world will improve global oil security by lessening the reliance on volatile regimes like Iran, Iraq, and Russia.

Refiners Side with Markey

Now, with all of those advantages in mind, you might wonder how anyone could possibly support keeping the export ban in place. But many US refiners resolutely oppose lifting the ban.

Refiners have been some of the biggest beneficiaries of the shale boom. The flood of US oil has dropped the price of West Texas Intermediate (WTI, the US crude oil benchmark), making it cheaper for refineries to buy feedstock. But the price refiners command for their finished products isn’t linked to WTI; instead, it’s tied to more expensive Brent crude (the global benchmark). With the gap between WTI and Brent widening, refineries have been buying low and selling high in recent years, reaping significant financial rewards they don’t want to lose. But if the US banishes the export ban, domestic refiners would have to compete with the entire world market. Without boundaries, US oil producers will have the luxury of selling to the highest bidder. As a result, the price American refiners will pay for crude will likely increase, causing margins to shrink.

On the other hand, some refiners are beginning to see the light. At least a couple have come out in recent weeks to support of lifting the ban. “We don’t oppose lifting the crude-oil export ban, as we fully support free markets,” Marathon spokeswoman Stefanie Griffith said in an emailed statement to Reuters. Phillips 66 says exports of crude oil and other products “are good for our country and contribute to a strong balance of trade,” Reuters quoted a spokesman as saying.

Whither the Pet Rock

Doug Sheridan, founder and managing director of Houston’s EnergyPoint Research, understands the refiners’ point of view. But it rankles him, to say the least. And Sen. Markey has been among the objects of his ire.

Sheridan, a 20-year oil and gas industry veteran, points out that many of the refineries objecting to the idea of a crude oil ban reversal are located in the northeastern US. To him, their opposition – backed by political leaders – is akin to one region of the country hampering the economic opportunities of another.

“We’ve got politicians in Massachusetts telling people in Texas that they can’t go outside the boundaries of the US,” Sheridan says. “The mineral rights owners in Texas have the right to seek the best price for what they own, just like the refiners in the northeast do.”

He explains further: “Boston is a technology center, but you don’t see anyone telling them not to export their technology. It’s a case of non-hydrocarbon producing regions telling us (the hydrocarbon producing states) what we can and can’t do with our assets. It’s like Texans telling Detroit not to sell their pick-up trucks overseas because we need them all.”

Sheridan also doesn’t buy the pro-ban logic that the US shouldn’t sell crude because the country may run out of it. “We have tremendous resources that we’re just starting to develop. If the US worried constantly about running out of something, we’d never export anything,” he says.

Like Sheridan, experts agree that between the untapped potential and current glut, we have sufficient resources to meet both domestic and international needs well into the future. While we used to worry that our oil resources had peaked, today, we’re measuring our reserves in centuries. Although President Obama appears to favor lifting the ban, only Congress can fully reverse the limitations on exporting crude.

According to a Reuters story, no major legislation has surfaced to overturn the ban – and few expect lawmakers to introduce any measures before the November 4 midterm elections. But that doesn’t mean energy producers, economists, and others aren’t hopeful that the US crude export ban will, like the Pet Rock, be recognized for what it is – an archaic throwback to a past time – and become a distant memory.

Doug Sheridan is founder and managing director of EnergyPoint Research, Inc., which provides independent research regarding the oil and gas industry’s satisfaction with the products and services it provides. Before starting EnergyPoint Research in 2003, Sheridan was director of strategic planning-midstream for El Paso Corp. He managed risk analysis, project evaluation and other functions for El Paso Field Services and its publicly traded MLP affiliate, Gulf Terra. He is a graduate of Vanderbilt University and earned his MBA at the University of Michigan Stephen M. Ross School of Business.