The Mexican energy sector was nationalized in 1938.  With the establishment of Petróleos Mexicanos, a state-run monopoly was formed.  “Pemex” essentially ushered foreign investors out the door.

In the ensuing decades, Pemex earnings that plumped Mexican tax coffers came to account for about one-third of the national budget.  Pemex took on the role of the goose that proverbially laid Mexico’s golden eggs.  But the system was deprived of checks, balances, and healthy reinvestment, and was fed a steady diet of excess.  Pemex eventually became a bloated bird, grown fat on reputed corruption and unwilling (or unable) to break free of the institutionalized inertia of convention and complacency.

While Mexico has enviable hydrocarbon resources at its disposal—reported to be the largest unexploited oil and sixth largest shale reserves in the world—Pemex has been hamstrung by lack of self-professed technical expertise that would allow them to exploit deep-water resources in the Gulf or the untapped oil and gas trapped in onshore traditional and shale plays.

The result?  The country is currently only the world’s seventh-largest crude producer, and its oil output has remained virtually stagnant over the past five years. 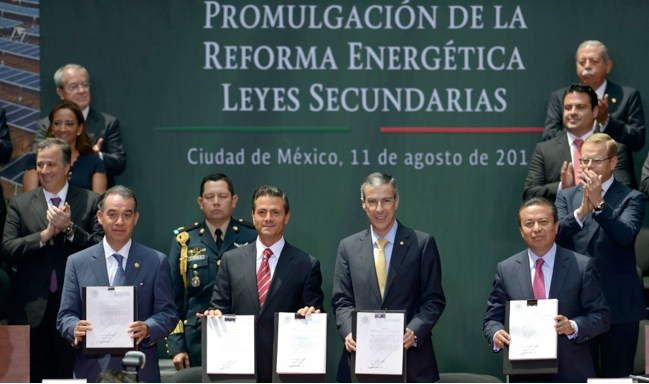 Photo credit: Office of the Presidency of Mexico

Of course, this is all in the process of sweeping change.  On August 11, 2014, Mexican President Enrique Peña Nieto signed into law a constitutional amendment that will allow foreign investors access to the country’s assets for the first time in nearly 80 years.  As a result of the new legislation, it’s estimated that future Mexican energy production might see an increase of as much as 75% by 2040.

Carving Up the Assets

In the first cycle of government-sanctioned disbursements – dubbed “Round Zero” – the government has already approved 22 joint ventures in the form of migrating service contracts to foreign entities that they estimate will account for nearly $44 billion in investments over the course of the next two decades. Further, in November, a 13-month meting-out process will begin that will encompass 10 large areas, both onshore and offshore.  These are likely to bring in another $32 billion in investments.

Pemex was awarded 83% of the country’s proven reserves but only 21% of future prospects.  While they were edged out of certain deepwater offshore prospects (as well as more complex, nontraditional areas experts believe may be similar in geology and potential to successful US shale plays), Pemex still retains the options to bid for future projects of interest in the coming rounds.

Recently installed Pemex CEO Emilio Lozoya is fast building a reputation as shoot-from-the-hip, no-nonsense reformer.  He believes that Pemex will have an advantage in this process thanks to some of the infrastructure and refining capacities the company currently in place, citing 80,000 km of pipeline that will lower cost for foreign investors and keep Pemex bids competitive.

While tight-lipped about who will be partnering up for big investments, an MOU (memorandum of understanding) with Chevron is already a matter of public record.  Lozoya says that all the big players – such as Exxon and Shell – if not already onboard, soon will be.  He is candid about the company’s success rate in deepwater exploration – “between 63% and 64%” – but equally transparent about Pemex’s need to cultivate critical collaboration and much needed expertise from the outside to realize and execute subsequent production quickly, effectively and safely.

Per a report in the September 17 edition of Oil & Gas Journal, Pemex has already awarded an $80-million contract to South Korea’s Samsung Engineering Co. Ltd. “for the execution of an ultralow-sulfur diesel (ULSD) project at its Antonio M. Amor refinery in Salamanca, in Guanajuato state.  According to a Samsung spokesman, the operation is set to include a 38,000-b/d hydrodesulfurization (HDS) unit, as well as the revamping of the refinery’s existing 53,000-b/d HDS unit.”

Lozoya’s positive stance is certainly understandable, given his vision for the future.  The unfortunate reality, as previously posited in an earlier post, “Mexico’s Game-Changing End to Its Oil and Gas Monopoly,” is that these changes will likely not come easily – or without caveats.

With 40% of the population polled opposed to the reforms, Lozoya may have a long row to hoe.  Many cite a worry over the haste to reap profits outpacing safety and environmental concerns.  Others question whether or not pumping new money into the economy from foreign sources will trickle down to the average citizen.

We recently spoke with Peter Cook, President of the US-based Petroleum Connection, organizer of an upcoming November 14 symposium on Mexican Petroleum Infrastructure that will bring together experts and potential investors from both sides of the border.  He confirmed this public opposition to the reform measures.

“A lot of [the opposition to the legislation] is driven by people who want the country to retain ownership of all the oil and gas, keep it all under one state-run entity,” Cook explains.  “But I think we’ve seen, over the last 50 years, that has been neither an efficient nor effective model.”

Cook says the reason is pretty straightforward:  “Historically, any money [Pemex] made goes to the state, and the state spends it on other programs.  Pemex provides an enormous amount of the Mexican budget.  Because they don’t retain any of their earnings, they can’t reinvest, so now they’re way behind.  They could have been leaders in the shale gas and hydraulic fracturing world, but instead they have almost no one with the expertise in these fields.”

So while the floodgates may be opening, Mexico still needs to get its oil & gas house in order.  Despite Lozoya’s optimism, Cook believes that the major stumbling block to forward trajectory is on the infrastructure side.

While some major players like Haliburton are already very active in Mexico, Cook says that as far as the actual producers—“the BPs, the Exxons, the Shells”—may be ready to jump on offshore opportunities, there’s been some hesitation to pursue onshore prospects due to this lack of infrastructure.  “In the US, you can pretty easily set up a supply chain because there are so many companies that are so eager to work anywhere.  But in Mexico, there’s just not that tier of support companies that can lay pipe or do welding… All of that is lacking,” he says. “It’s a big risk.”

A history of corruption is another factor that cannot be swept under the rug.

“[Corruption is] certainly an issue that’s on everyone’s minds,” Cook admits.  “To the Mexican administration’s credit, they’ve been trying to address it, but it’s one thing to make broad statements, and another to actually execute.  There is [some hesitation] among the major oil and gas players to get engaged until they see they’re not going to be dealing with corruption and safety issues.”

As a show of faith to their commitment to curbing corruption and safety concerns, Pemex has already pledged $282 million to expand an automated inline security system that detects the theft of crude and fuel oil from its pipeline network.  Such efforts will hopefully curb illegal pipeline tapping activity that “endangers the safety of nearby communities and threatens the environment.”

In addition to concerns over environmental and the standard array of safety concerns inherent to O&G production, Mexico must also contend with the real danger to personnel and equipment from its infamous cartels.  But at the end of the day, Cook maintains that the reforms offer a real hope for some Mexicans to not only better themselves financially, but to avoid becoming part of the cycle of drugs, violence, and organized crime that often can seem the only way out.

A Move in the Right Direction

“The reform is a wonderful thing for Mexico and the [oil and gas] industry, especially for the growth of the middle class,” Cook maintains.

“It’s going to promote education and jobs, particularly in places where there’s a lot of instability right now.  Young men in northern Mexico don’t have a lot of options, so they’re looking at either going to the US or getting involved in the cartels.  Now, they’re going to have another path where they can have a steady income, raise a family, get an education.”

Despite the challenges ahead, Cook’s assessment of the legislation expects positive outcomes for Mexico.  “If they’re able to [follow through] on this, 20 years from now, there’s going to be a remarkable change in Mexico as a result.”

While it’s early days, if Mexico can keep on point, the potential to reclaim its position as Latin America’s top energy producer may yet come to pass.

Peter Cook, a graduate of the University of Dallas, is President of the Petroleum Connection, a firm that identifies and coordinates niche Oil & Gas industry symposiums for Studium Conferences.  He is currently a member of the Society of Petroleum Engineers and the Texas Alliance of Energy Producers. In the past, he served as Vice President of the University of Dallas National Alumni Board. He has been a member of the Board of Directors for the Men’s Leadership Forum in Washington, DC, and the American Association of Radon Scientists and Technologists.