The discovery of the Bakken shale – and subsequent technological advancements for effectively tapping its wealth of resources – has ushered in an oil boom that brought a strong employment picture to a previously sluggish North Dakota. We’ve all heard about local business owners in the region struggling to find qualified workers to fill their job openings. But does the Bakken’s bounty also pump good fortune into neighboring counties or even other states?

Thanks to the good folks at the Federal Reserve Bank of Minneapolis, we now have concrete evidence proving that North Dakota’s shale oil activity influences employment even farther afield. To assess the Bakken’s proverbial “ripple effect,” the Federal Reserve Bank of Minneapolis plotted data in 100-mile concentric circles moving away from the shale region’s core, comparing county-level data on unemployment rates relative to distance from the Bakken. The concentric circles represent the unemployment rates at the beginning 2013 (the US average at the time was just under 8%): 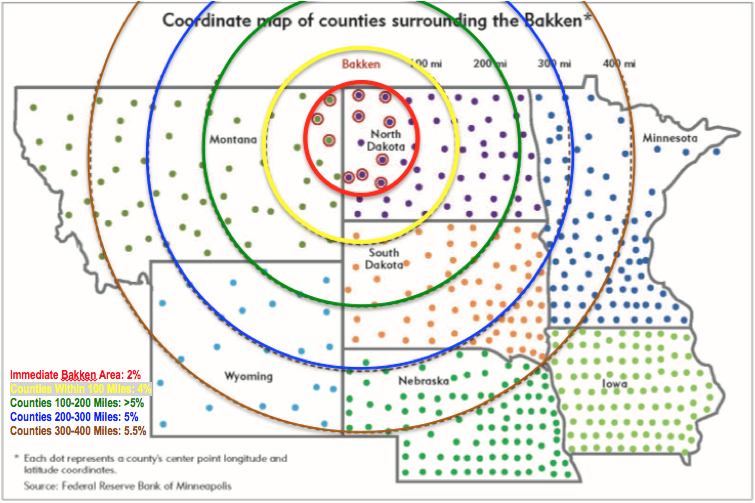 At first glance, the results seem pretty expected: The closer to Bakken, the greater the employment benefits. Upon closer analysis, the much more compelling fact is that even 300+ miles away from the core, the employment picture is still brighter than for the US as a whole.

Read more about the impact of the Bakken shale and other plays on the entire nation at our post “Prosperity from Shale Broadcasts across the Country: Available Jobs, Astronomical Paychecks.”