Geologically Speaking: What Is Fracking?

We often point to the start of the shale revolution around 2008. But really, shale development didn’t begin a decade ago. It didn’t begin in 1947, either, the year that the Stanolind Oil Corporation experimented with its first “Hydrafrac” well by injecting 1,000 gallons of napalm-thickened gasoline and a gel “breaker” to extract trapped gas from a Kansas limestone formation.

Heck, shale development didn’t even start in the 1860s, when liquid nitrogen was blasted into shallow, hard rock to coax more oil out of wells dug in West Virginia, New York, and Pennsylvania.

Shale oil and gas development really began around 460 million years ago. Nature began recycling the carbon-rich carcasses of primitive animals and plants, which ultimately settled to the bottom of inland basins and seas, many of them deprived of oxygen and undergoing multi-million year transformations of heating and compression (or “compacting”). During mountain-building and fast continental shifts, the gooey sediment hardened and ultimately became contiguous layers of rock, mostly buried thousands of feet underground.

Why are we Geology-101-ing you? Well, in the process of compression, shale became “source rock” for petroleum and gas.

North America has a bounty of highly compressed, contiguous layers of shale, most buried thousands of feet underground – and as it turns out, we are not unique in our geology. Significant shale plays have been found in Russia, Venezuela, Mexico, Brazil, Peru, North Africa, the North Field between Iran and Qatar, the North Sea and the Arctic circle, Nigeria, Angola, and Australia. 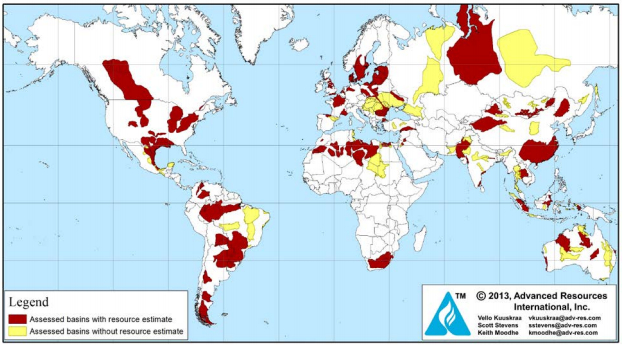 The EIA’s assessment of shale basins of the world reveals their estimates from May 2013.

Over the past couple years, the Canary blog been providing a wealth of information about global impact of the US shale revolution. But forget the socioeconomic and geopolitical ramifications for a moment – or how the current shale boom will affect our economy, climate, and personal lives. Let’s talk technical: We wouldn’t have the shale revolution without the advent of this technology.But until recently, all that petroleum and gas just sat there, unused… until the advent of a revolutionary technique we’ve come to know as “fracking.”

What Is Fracking, Anyway?

The term “fracking” has earned household status for many, thanks to extensive media coverage. From discussions of unarguable economic benefits to environmental hazards to plummeting gasoline prices, it seems like we can’t go a day without hearing about it.

Still, you shouldn’t be embarrassed if you aren’t clear on the term.

If you can’t define it, you’re not alone. It’s a complex technology, and many profess confusion about what fracking actually means and how it’s done.

Let’s start with the basics. Like the origin of the term “fracking.” This is actually industry shorthand for “hydraulic fracturing.” There’s been plenty of debate surrounding the “proper” spelling of this shortened moniker: Some industry folks will tell you “fracing” is the only correct term. Others – including most media outlets, prefer the “k” spelling.

But what is fracking – or fracing – exactly? Journalist Russell Gold has defined fracking as “the violent act of cracking open rocks.” That’s a fairly accurate description: Fracking involves “blasting” millions of gallons of water, sand, and a unique brew of chemicals – anything from coffee grounds to acids and gels – to break apart dense, “tight” shale formations to get at the oil and gas trapped deep inside. 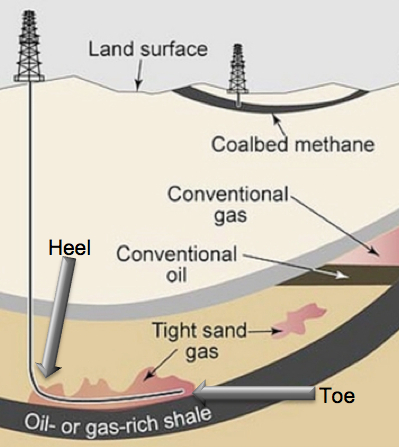 Geologist Dan Steward was a notable member of the Mitchell Energy team that pioneered fracking and revolutionized the shale gas industry, beginning with the Barnett play in Texas. He sat down with us to explain the process and the equipment behind the technique in layman’s terms: “The ‘toe’ is the very end of the lateral, and the ‘heel’ is back at the area where you’re making the turn for your lateral. You always start fracking at the toe. You drill down vertically, then start turning your wellbore to get it horizontal. Then once you get it horizontal, you drill in formation out to some terminus (a toe). We put these huge induced fractures into the shale. After we frack it, we start producing the frack fluid off and leave all that pressure down in that frack so that it’s now substantially lower than the pressure in the shale. When you produce the induced fracture, you initially are producing back to your frack fluids. When you eventually get most of that back out into your fracture, that creates a pressure sink within the fracture. The shale recognizes that and tries to equalize.”

As early as 1947, drilling companies have been experimenting with high-pressure gas and fluid injection to increase the longevity and volumes from oil and gas reservoirs. Back then, drillers could only drill vertically. This method was fine for accessing “conventional” oil and gas because the resources are “pooled” in large reservoirs. But vertical drilling didn’t allow operators to access the vast areas of shale gas and oil embedded deeply in small pockets of rock.

As the name suggests, horizontal drilling is the process of – you guessed it – drilling for oil and natural gas horizontally. This enables producers to extend the reach of drills laterally across miles of shales underground. This comparatively recent invention allows operators to drill and set pipe for one to two miles horizontally through the same shale formation.

The result? More oil and/or gas can flow without the need to drill multiple vertical wells. Besides reducing the surface “footprint” of a drilling operation, horizontal drilling can seal or relieve pressure in an out-of-control well. It can be used to boost the productivity of older fracked wells, or to install gas and electric lines that must cross a river, a road, or travel under a city.

Combining fracking with horizontal drilling was akin to Cinderella trying on the glass slipper or Reese’s spreading peanut butter on a chocolate bar: the perfect match. Without the combination, unconventional fuel sources such as “tight oil” and “tight gas” found in seemingly “tight,” “non-porous” shales could not be extracted for commercial use.

The versatility and power of shale development have ushered in a US boom in domestic oil and gas production – and its placement on the path to becoming the world’s top oil producing country. In 2008, the US was spending $100 billion a year to import liquefied natural gas. But now, American natural gas production has reached records of 72 billion cubic feet per day.  Fracking has kick-started a new era of American energy security: In less than five years, fracking has let us save $40 billion in energy imports, fueled the growth of cleaner natural gas power plants, and created an estimated 240,000 new jobs.