If figuring out who would snap the Thanksgiving turkey wishbone sent your family into a skirmish last week, it was still probably nothing compared to the internal slug-fest that oil ministers from the Organization of Petroleum Exporting Countries (OPEC) waged when they met Thursday in Vienna. But that battle is actually a war against US shale production – with oil prices as the weapon.

For months, OPEC has been grappling with what to do about the gusher of oil flowing from American shale developments. The boom in tight oil production means the US is pumping about 4 million new barrels of crude per day into the global market – a significant amount of the world’s 75 million barrel per day production.

Until recently, US crude didn’t affect global prices very much. Those 4 million barrels of domestic oil were used, instead, to offset the 3 million barrels that weren’t reaching the market because of civil war in Libya, sanctions on Iran, and the general mess that is Iraq.

But with oil production in Libya and Iran back on track and weaker demand for oil in Asia and Europe, prices had already begun a downward spiral, from a June peak of $115 per barrel to around $80 per barrel before the OPEC confab.

Some of OPEC’s 12 members pleaded with the cartel to take drastic action to cut production, which would have had the effect of reversing the price slide. That idea was aggressively opposed by OPEC’s Gulf members, which have sought to maintain market share by cutting prices.  One concern OPEC had is that, if it were to cut production sharply, the resulting higher prices might encourage even more US shale production. 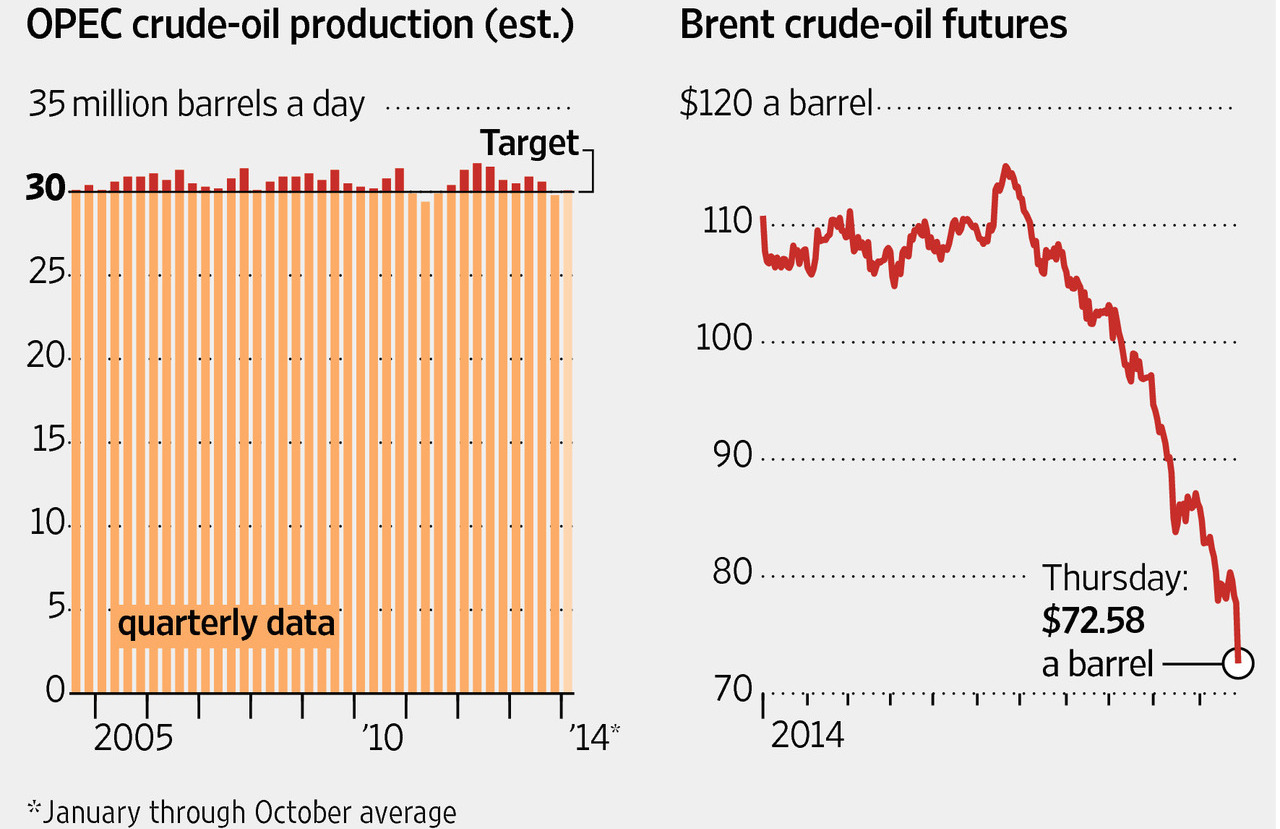 OPEC exceeded its targeted 30 million barrels per day in most quarters since setting this at the end of 2011. But the group didn’t change the target at their recent meeting.

In the end, the cartel decided to keep its production ceiling of 30 million barrels a day unchanged.

And almost immediately, the West Texas Intermediate (WTI) benchmark fell below $70 a barrel for the first time in more than four years. Although most US shale producers can still be profitable around $62 a barrel – and many can withstand even lower prices – it is OPEC’s hope that falling prices will drive US producers out of business.

Leading the charge for keeping the production ceiling was Saudi Arabia’s oil minister, Ali al-Naimi. He convinced fellow OPEC members they must combat the US shale oil boom and undermine the profitability of North American producers by maintaining high production levels even though that means lower prices all around.

Rich nations like Saudi Arabia can more easily withstand lower oil prices – a fact not lost on OPEC cohort Venezuela, which is already poised on the brink of default and needs prices above $117 per barrel to balance its government budget next year, according to Deutsche Bank.

For the South American nation and other less affluent OPEC members like Iran and Algeria, pruning production to prop up prices made much more financial sense. That’s the strategy Venezuela argued for – unsuccessfully. The fact is, in Saudi Arabia’s battle against US oil producers, even another member of the cartel doesn’t seem to count as much as the overall goal. If Venezuela’s struggling economy is ruined… well, that’s just collateral damage.

“Naimi spoke about market share rivalry with the United States. And those who wanted a cut understood that there was no option to achieve it because the Saudis want a market share battle,” an unnamed source said after the meeting.

OPEC Secretary General Abdullah al-Badri effectively confirmed that OPEC was entering a battle for market share. Asked on Thursday if the organization had an answer to rising US production, he said: “We answered. We keep the same production. There is an answer here.”

So it appears that Saudi Arabia – once again – gets the wishbone.