Much like scores of political hopefuls before him, Presidential candidate Barack Obama rode to power on the campaign promise of bipartisanship.  In office, however, his attempts at finding common ground have often been less than successful.  Although the reasons why vary, both parties have laid the blame on the other’s doorstep.

On the topic of TransCanada’s Keystone XL pipeline, however, the chasm between Democrats and Republicans may be narrowing. A number of Democratic senators have recognized the benefits of Keystone XL construction and, splintering from their own party, have joined the Republican ranks in urging the President to build that long delayed pipeline, now nearing its sixth year in limbo. 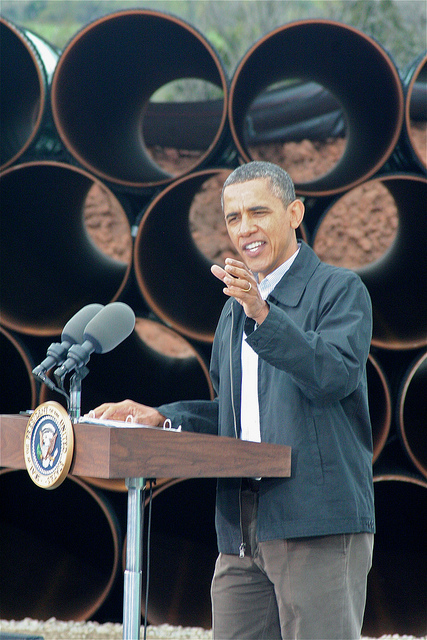 But the President’s verdict may rest on  court proceedings that will start later this week in Lincoln, Nebraska.

On Friday, the Nebraska Supreme Court will begin hearing oral arguments aimed at overturning an earlier district court decision that halted the national permitting process for the Keystone XL’s route.  If the state is successful, the pipeline route could be approved.  If the state’s appeal fails, it doesn’t mean the project has no hope of moving forward.  But TransCanada Corp. would be forced to try – for the third time – to submit a pipeline placement plan through the state.

Could the third time be the charm?  Or will the President decide it’s time to pull the plug on the pipeline?  It seems unlikely that the federal government will make any move until the Nebraska court case is finalized, and that’s not expected until next year… which suggests that the wrangling over the Keystone will continue, with President Obama under increasing pressure from both sides to come out in favor of the pipeline.

Approval of the Pipeline up to President Obama

The fight over the Keystone XL pipeline has been seen as a battle between environmentalists – whose opposition is built around fears of spills and emissions linked to climate change – and supporters who say the pipeline will increase energy independence and create jobs on US soil.

Despite the split, 61% of Americans surveyed recently by Pew Research said that they supported construction of the pipeline, while only 27% opposed it – and those numbers are basically unchanged since this time last year.  The pipeline proposal is far more popular among Republicans and independents than it is among Democrats: 84% of those who identify themselves as GOP faithful support the Keystone XL, as do 61% of independents.  For Democrats, the number is a smaller, but still significant, 49%.

Because the Keystone XL pipeline would cross the border between Canada and the US, it needs to be approved by the US Department of State, which means President Obama could veto the project outright if he wanted to.

In 2012, in fact, Obama rejected the proposal.  At the time, many observers said the President’s response was pushback against Republicans who were trying to force the issue.  Of course, there was also considerable concern about the route the proposed pipeline would take through the environmentally sensitive Sand Hills region of Nebraska – a path that even the state’s Republican governor opposed.  But after TransCanada rerouted the pipeline to avoid Sand Hills, Nebraska officials signed off on the new proposal, which was sent back to the State Department for further study.

Finally, in February of this year, the State Department released its latest report on the Keystone XL – an extremely thorough examination that concluded that stopping Keystone won’t do anything about climate change (the environmentalists’ hot-button issue) but building it would create 3,900 pipeline construction jobs and support 42,000 related positions (the pro-Keystone faction’s chief key contention).

But even with the State Department’s green light, the Keystone XL remains stalled on the President’s desk.  And that is causing outrage within Obama’s own party.

Among the most strident voices has been Senator Mary Landrieu, a Democrat from Louisiana.  Landrieu, the chair of the Senate Energy and Natural Resources Committee, called the delay “irresponsible, unnecessary and unacceptable.”

Landrieu is hardly alone in her disdain.

Senator Mark Pryor of Arkansas has been widely quoted as saying, “When it comes to the Keystone XL pipeline, there’s no excuse for another delay.  The President needs to approve this project now to ensure our future energy security and create jobs here at home.”

On May 12, Pryor took it a step further:  He and his re-election opponent, Republican Representative Tom Cotton, made a joint appearance at a Little Rock pipe manufacturer to call for an end to the impasse.

Alaska’s Democratic Senator Mark Begich has also chimed in:  “I am frankly appalled at the continued foot-dragging by this administration on the Keystone project.”

(At least these comments were more genteel than the opinion of Terry O’Sullivan, head of the Laborers’ International Union, which represents over a half-million construction workers.  He was quoted by the Washington Post as saying that the “the Obama Administration should grow some antlers or learn from Popeye and eat some spinach.”)

The latest news from the Senate, where Democrats hold a 55-45 majority, is that 11 Democratic members side with the Republicans on the Keystone debate.  Four more Dems are needed to ensure the 60 votes it would take to pass a bill, taking the authority to approve Keystone away from the President.  Of course, even if that happened, Obama could still veto the measure.  But it’s possible that a Senate vote showing bipartisan support for Keystone could sway the President to end years of holdups and studies and at long last approve the project. 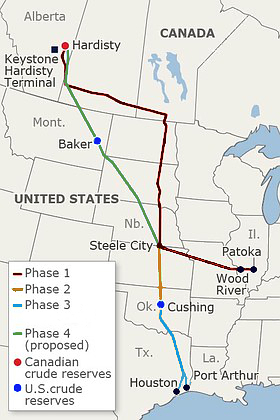 The completed Keystone XL would connect Hardisty, Alberta, Canada, to the US Gulf Coast.

What We Stand to Gain

If the Keystone XL is approved, how will the US be affected?

The biggest gain will be in jobs that are created without a dime of support from the government. For a President who has made job creation a priority, it seems this would be pretty appealing.

As noted earlier, the State Department’s report estimates that the pipeline’s construction would result in almost 4,000 jobs over two years, eventually supporting as many as 42,000 related jobs.  According to a 2011 Canadian Energy Research Institute (CERI) study, full development of the oil sands could support more than 500,000 additional jobs in the US by 2035.

Just consider some of the benefits that the State Department expects out of the Keystone XL project:

And, yes, there’s even an environmental upside to the Keystone XL.  Moving crude by pipeline is actually widely considered a safer, cleaner alternative to rail.

Remember this:  Just because a pipeline isn’t there, doesn’t mean oil and gas simply go away.  The resources are still in the ground, and companies are still tapping them – regardless of the available means of transport.  Alberta is going to continue to send oil to our Gulf Coast refineries – regardless of whether the Keystone is built or not.  But if it isn’t constructed, they’ll have to continue transport their crude using trains or trucks – which are more expensive shipping methods, emit higher CO2, increase the risk of road accidents, and get bogged down in bad weather.  Both methods also burden our roadways and incur increased demand for infrastructure maintenance – development that has its own environmental perils.  In addition to enjoying a substantial cost advantage, pipelines also result in fewer spillage incidents than road and rail.

Between the boost to the US economy, job gains by America workers, and the State Department’s admission that the Keystone won’t harm the environment, the pipeline project appears to be a good deal – even to a rare bipartisan crowd.

What remains to be seen is if it ever becomes a done deal.