Could Oil and Gas Make the Arctic an International Hotbed?

It’s a chilling reality: The Arctic is particularly vulnerable to global warming. Temperatures in the ‘Ocean of Ice’ are rising twice as fast as the rest of the world. As a result, sea ice is rapidly thawing, causing no small concern to science and citizens alike. During the 2013 melt season, in fact, the Arctic lost ice equal to the geographic area of US states from Tennessee to Maine. 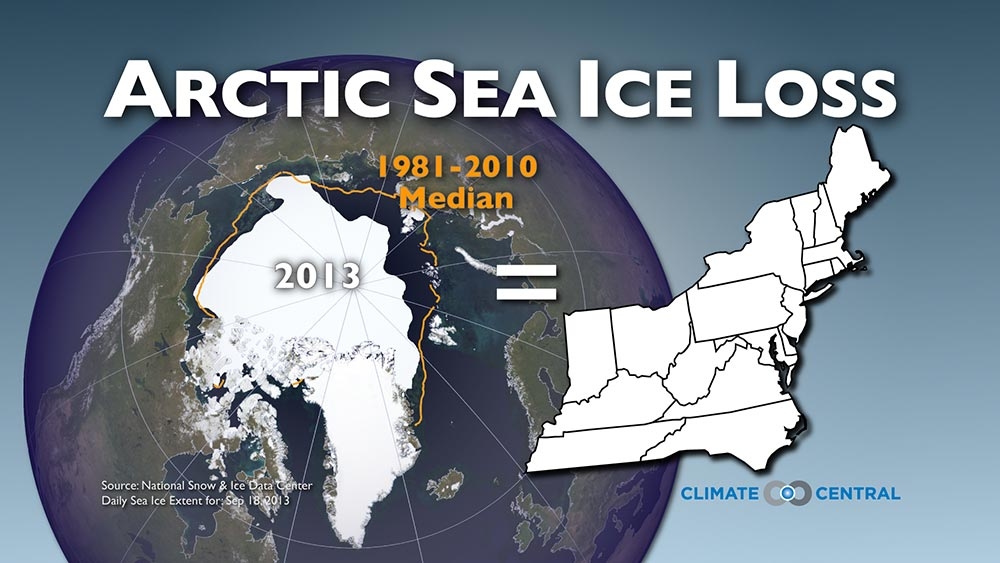 Arctic sea ice loss during the 2013 melt season was equivalent to losing the entire area of states from Tennessee to Maine. Credit: Climate Central

If there’s any silver lining to this story, it’s this: The Arctic meltdown is creating a potential bounty for oil and gas exploration. Ice loss is allowing unprecedented access to the seabed’s rich – but previously off-limits – natural resources.

And when we say rich, we’re talking really, really rich. Like Warren-Buffet-rich.

The US Geological Survey estimates that the Arctic may hold 1,670 trillion cubic feet of recoverable natural gas, 44 billion barrels of recoverable liquefied natural gas, and 90 billion barrels of undiscovered, recoverable oil. Put another way, 30% of the world’s untapped gas and 13% of its undiscovered oil are in the Arctic.  According to the Washington, DC, think tank The Woodrow Wilson Center, the world oil and gas industry is expected to invest roughly $100 billion in the Arctic by 2023. 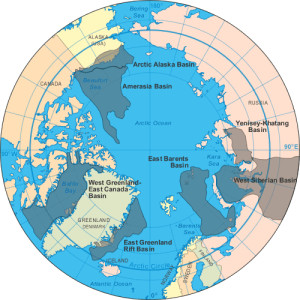 In addition to giving oil and gas drillers a shot at recovering vast resources, the shrinking Arctic ice also increases the potential for transporting any production through the Northwest Passage. Pack ice has historically prevented shipping through the Northwest Passage, a route that skims along the northern coast of North America, connecting the Atlantic and Pacific. But now that the Northwest Passage is thawing, shipping lanes once navigable only by heavy-duty icebreakers are clearing and could become open enough to permit commercial shipping at least during part of the year. An ice-free Northwest Passage could cut shipping routes between Europe and Asia by 3,000 to 4,000 miles, dramatically reducing costs and time as well as shaving off distance. Because of this, even non-Arctic countries have an interest in the region.

“The Arctic opening feeds into Asia’s very serious energy concerns,” said Mikkal Herberg, a senior lecturer on international and Asian energy at the University of California at San Diego’s Graduate School of International Relations and Pacific Studies. Herberg spoke during an Arctic energy forum held by the Washington, DC-based Woodrow Wilson Institute. “The notion of more oil and gas supplies coming from someplace besides the Middle East is attractive to them.”

With stakes that high, it’s no surprise that there’s jockeying for position in this formerly frozen frontier. Some of the countries that ring the Arctic – including Russia, the US (Alaska), Canada, Norway, and Greenland (owned by Denmark) – are contesting their sovereignty claims and reconsidering their strategic security commitments in the area. In fact, you could say that a sort of polarity has developed in the Arctic, pitting economic opportunity against the specter of armed conflict.

Russia was the first to make its claim – and an outsized claim it was, at that.

Russia has by far the longest legitimate Arctic coastline, extending more than 10,000 miles. However, Moscow brazenly announced in 2001 that it held the rights to almost half the Arctic Circle and all of the North Pole. Then, during an Arctic expedition just a half-dozen years, the nation’s made an even bigger boast. As the Russian flag was wedged under the ice, the lead explorer declared, “The Arctic is ours.”

But the cold, hard truth is that Russia’s banner-planting occurred far beyond the territorial limit known as the exclusive economic zone. The Arctic is administered according to the domestic laws and regulations of each Arctic state – but also subject to bilateral, regional, and international agreements. The exclusive economic zone is an internationally agreed-upon concept set forth by the UN Convention on the Law of the Sea, which says that every maritime state’s continental shelf extends 200 nautical miles. Russia contends that the Lomonosov ridge that stretches beyond the 200-mile boundary is actually an extension of its continental shelf, giving the nation a territorial advantage.

(Not that Russia is alone in this debate: Canada and Denmark have also made similar assertions about their portions of the Lomonosov.)

Given that Russia’s National Security Council says the Arctic is likely to become the nation’s primary resource base by 2020 – half of Russia’s 113 offshore blocks are in the Arctic – it’s understandable that Moscow would try to go for the ice cap equivalent of a land-grab. And although it may not cause a cold war with a capital “C,” Russia does seem willing to engage in armed conflict over its Arctic interests, disputed or not. The country recently outlined plans for the formation of a specialized military force that will protect Russia’s claims. That includes restoring Soviet-era airfields and ports and marshaling naval assets.

Most military analysts, however, play down the prospects for armed conflict in the Arctic. They point to the resolution of a decades-old maritime border dispute between Russia and Norway in the Barents Sea as a model for Arctic diplomacy.

At the same time, none of the Arctic coastline nations seems to be taking any chances. Almost all of the Arctic neighbor states are redeveloping their northern military and security capabilities in order to respond to the expected increase in activity in the Arctic. Yes, even the US.

US National Interests on the Line?

Last November, in fact, the Pentagon outlined national interests in the region, including missile deterrence, maritime presence, and freedom of the seas. The Pentagon report followed the Department of Defense-issued “National Strategy for the Arctic Region,” which was released in May. This strategy identifies the Department’s desired end-state for the Arctic: A secure and stable region where US national interests are safeguarded, the US homeland is protected, and nations work cooperatively to address challenges.

Through security cooperation and other military-to-military forms of engagement, the report says, “The US can establish, shape, and maintain international relations and the partnerships necessary to meet security challenges and reduce the potential for friction.” More specifically, the report called for further development of the capabilities and capacity to protect US air, land, and maritime borders in the Arctic.

For the Council on Foreign Relations, a US foreign policy think tank, protecting our Arctic interests means that, in particular, the US will need to further expand our Coast Guard-led maritime capabilities. The group cites the fact that America has just two icebreakers in the area, compared to Russia’s 30 (including the only nuclear-powered ship) and Canada’s six. The National Research Council has also studied America’s preparedness for drilling in the Arctic, adding that the Coast Guard should also expand its bilateral agreement with Russia to include Arctic spill scenarios.

But bolstering maritime capacity isn’t an idea unique to the US. Even on the heels of its landmark agreement with Russia, Norway is beefing up its naval capabilities, building a new class of ice-strengthened frigates.

Developing crude oil in the Arctic is extremely hazardous. Strong ocean currents, severe storms, and floating ice all contribute to the risk. Tapping the rich energy resources there calls for equally rich resources, in the form of abundant capital and substantial expertise. In other words, cooperation may be the key to global security, but it’s just as essential when it comes to mining the energy-bearing basins of the Arctic.

That’s why – despite all of its bravado – Russia needs help to unearth its Arctic potential.

Norway’s state-owned Statoil is one of the international entities that has come to Russia’s side. Like Russia, Norway has a lot to gain from Arctic oil exploration. Although the Scandinavian nation is the world’s seventh-largest oil exporter, production from the country’s mature North Sea basins fell to a 25-year low in 2013. Because Norway’s offshore energy sector continuously needs new areas to explore to offset the declining production, the icy Arctic is an enticing alternative. And Norway has a unique advantage when it comes to understanding the workforce and infrastructure needs of challenging environments like the Arctic: For 20 years, the country has been drilling in the Norwegian Barents Sea in ice-free areas, where it has 90 wells.

Although the Norwegian government last year scuttled proposed exploration in the environmentally sensitive waters around the Lofoten Islands just above the Arctic circle – an area thought to hold 8% of Norway’s undiscovered oil and gas resources – the nation considers itself “a relevant partner” for Arctic development.

Russia agrees with that assessment: The two countries have joint projects in the Arctic, including the Sea of Okhotsk and Barents Sea.

In addition to its arrangement with Norway’s Statoil, Russia’s state-owned energy behemoth Rosneft has also inked deals with Italy’s Eni and US giant Exxon Mobil. The strategic partnership between Rosneft and Exxon Mobil includes shale exploration in Siberia, joint venture fields in Texas, and an opportunity for Rosneft to acquire a 25% interest in the Point Thompson unit in Alaska’s gas-rich North Slope. Although it seemed that Exxon’s drilling in the remote Kara Sea – a centerpiece of the agreement – might be put on ice over the Russia-Ukraine conflict earlier this year, in July a drilling rig to be operated by Exxon set sail from Norway en route to the body of water between the northern coast of European Russia and the Novaya Zemlya island chain.

Of course, no ring-around-the-Arctic oil hunt would be complete without a stop in Alaskan waters. US companies began drilling offshore Alaska in 1968, when ARCO and Standard Oil entered Prudhoe Bay. Prudhoe Bay is thought to hold the largest undiscovered oil deposits in the Arctic – some 30 billion barrels. Royal Dutch Shell, ConocoPhillips, BP, and Statoil are among the major companies with drilling leases there.

Moving slightly farther afield, Shell last year announced plans to pursue exploratory drilling in the Chukchi Sea beginning in July 2014. Those operations were put on hold, however, after a ruling stated that the Department of the Interior failed to consider all environmental impacts of the exploration when it gave Shell permission to drill.

Some of the lucrative Arctic Alaska basin is under dispute. Both the US and Canada claim a portion of the Beaufort Sea in an area that is thought to contain significant oil and natural gas resources, and American efforts to legally extend claims to the Arctic continental shelf are complicated by the fact that we’ve yet to ratify the UN Convention on the Law of the Sea. As such, the US is excluded from the legal process that other Arctic states are engaged in.

However the US-Canada debate shakes out, the Department of Defense is clear that diplomacy is the appropriate course to resolving territorial and other disputes in the Arctic. Being too aggressive in addressing security risks may create perceptions that the Arctic is being militarized, which could lead to an “arms race” mentality.

And that threat could put the entire prospect of Arctic drilling on thin ice.