“Shale Gale” Puts Wind in the Sails of US Industries

Amber waves of grain still dominate much of the rural landscape in North Dakota, a state long known for the production of wheat, corn, soybeans, and barley. But in certain regions, oil rigs are now as likely to dot the horizon as silos, and barrels have become as much a standard measure as bushels. 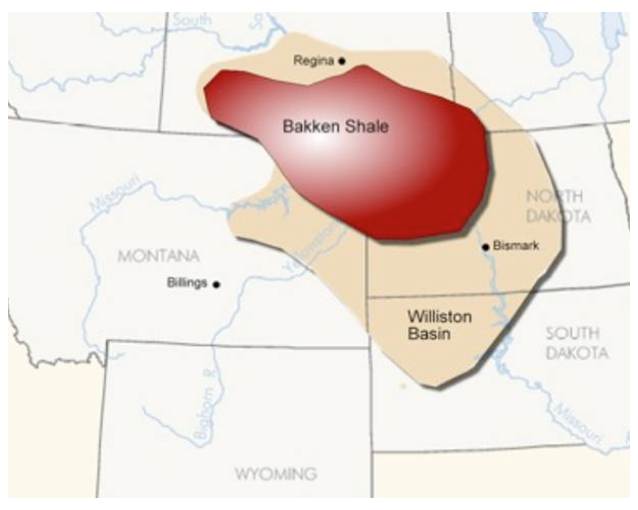 Spreading conically from northwest North Dakota into Montana and Canada, the Bakken is, by US Geological Survey estimates, the nation’s largest continuous oil accumulation. Since hydraulic fracturing and horizontal drilling were introduced there in 2007, production has soared to 800,000 barrels of oil daily. That means the Bakken has outpaced Alaska as the country’s number two oil producer. Only Texas is more productive. 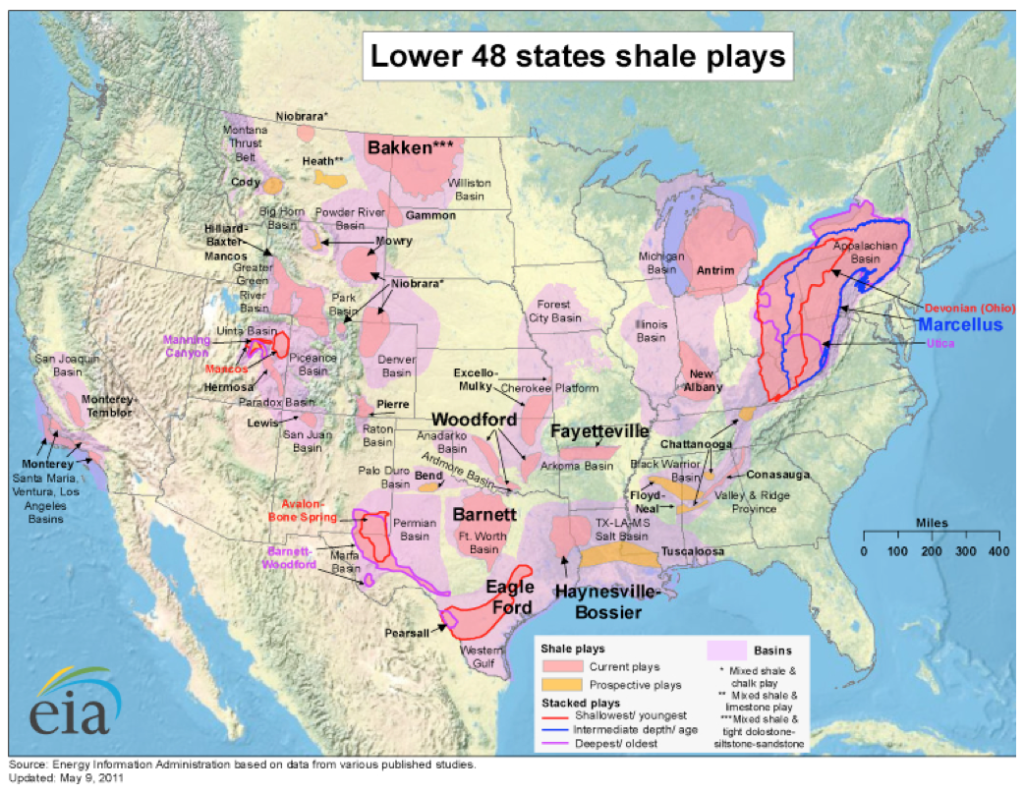 The Bakken and other domestic shale regions are buoying local economies, breathing life into struggling industries, and setting the stage for a groundswell in US manufacturing.

Cold Climate but a Hot Economy

With an ever-increasing need for workers, transportation, and various support services, it’s no surprise that the resource-rich Bakken has generated an economic bonanza for North Dakota. The state’s 3.1% unemployment rate is the country’s lowest. A recent CNN Money report, citing the US Bureau of Economic Analysis, said North Dakota’s economy grew by 13.4% in 2012. That was nearly three times as fast as Texas, which held the number two spot, and five times faster than the country as a whole. 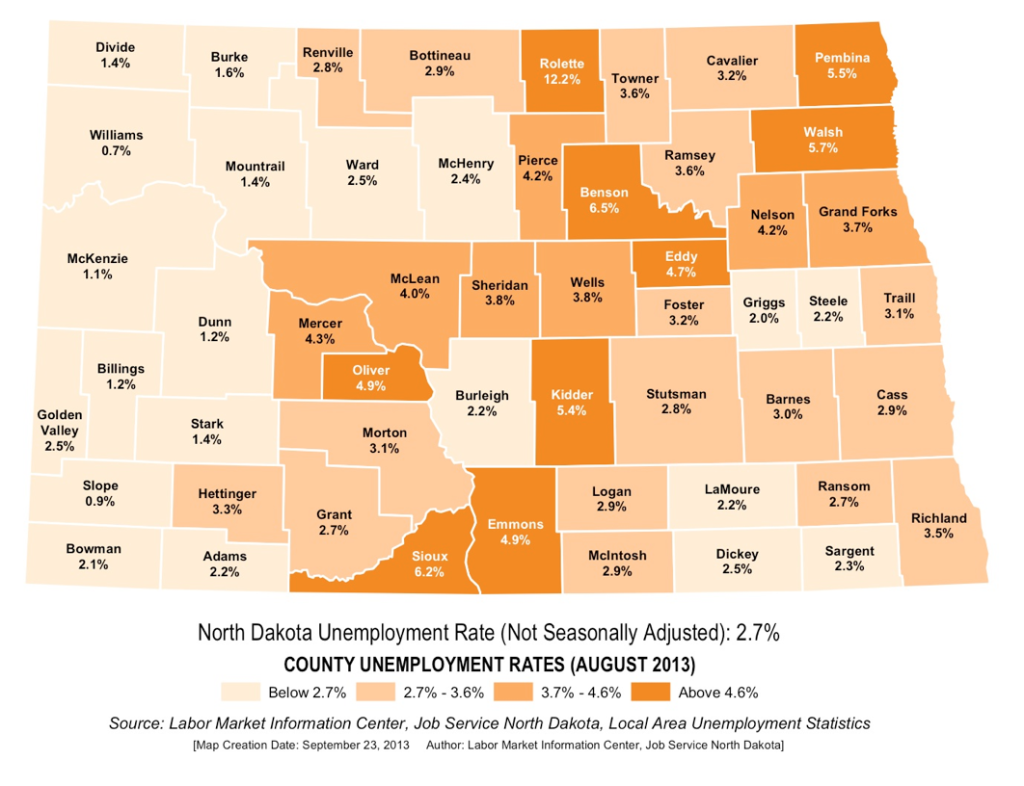 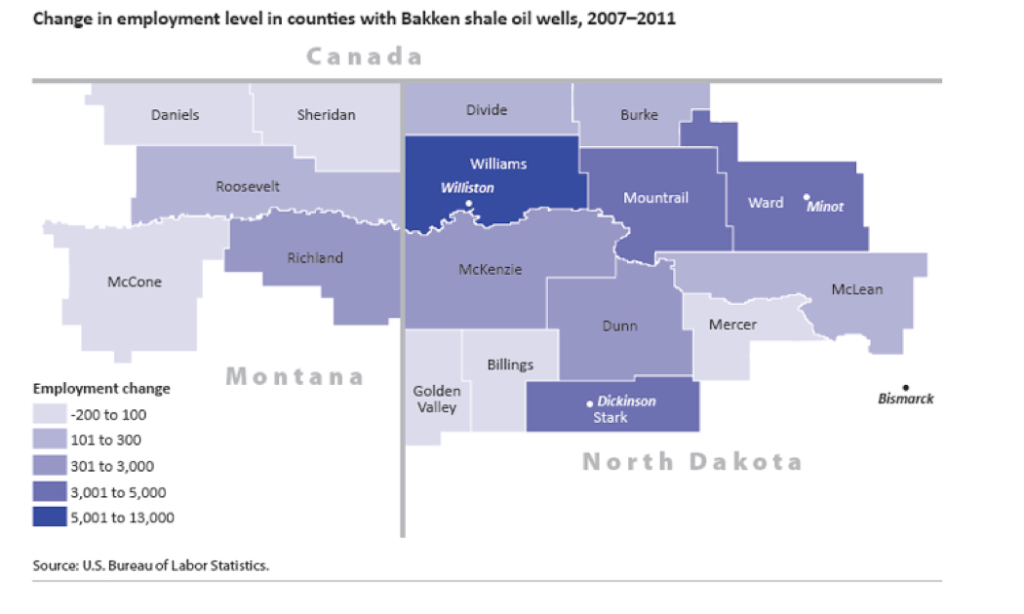 The state’s rapid growth and booming economy stand in stark contrast to its image as a harsh, wintry wasteland. Given that North Dakota boasts an average annual temperature of 40 degrees F, it’s easy to see why that impression has taken hold.

But that hasn’t stopped workers nationwide from donning parkas and snow boots, eager to participate in the black gold rush. The state’s population grew 2% between 2011 and 2012 – the nation’s highest rate. From 2007 to 2011, employment rose 35.9% in the North Dakota and Montana counties where Bakken wells are producing. During the same period, average annual pay shot up 53.1% to slightly more than $50K.

Beyond the per-capita windfall, the so-called shale gale has filled the sails of industries that sell into the oil sector. Consider, for example, the nation’s railroads.

Energizing a Lackluster US Business

In the mid 1800s – back when John D. Rockefeller built the Standard Oil Empire that ushered in the petroleum age – rail was the preferred method of transporting oil from one part of the country to another. Within decades, however, pipelines were viewed as a faster, more economical option. Rail use fell by the wayside, at least as far as the oil industry was concerned.

More recently, production from shale fields has grown faster than current pipeline capacity, and railways have emerged as an early beneficiary of the shale surge. For an industry looking to shed its old-school persona, shale transportation has been a sure kick-start.

Historically, less than 1% of crude was carried to refineries by rail. But by October 2012, six short years after the Bakken boom began in earnest, that figure had jumped up to 18%, and it reached 25% just a month later. US carloads of petroleum and related products rose 47% in the year-over-year period ending July 2012. According to the Association of American Railroads, 680,000 barrels of crude oil are now shipped daily by train.

Rail transport may seem like a bit of a throwback, but it provides a convenient and economical solution to a very real problem in the industry. Building new pipelines takes time – time that production companies simply don’t have. The rail infrastructure, on the other hand, is already in place: North Dakota has about 3700 miles of track, and long-abandoned tracks are being refurbished. Shipping by rail offers faster speed to market, and it prevents gridlock at production zones and the pipeline crossroads in Cushing, OK. Rail reaches areas inaccessible by pipeline. And it enables flexibility, allowing refiners to buy from a variety of locations at the best prices.

It’s no wonder refining companies are bullish on these “pipelines on wheels.”

Of course, rail transportation isn’t a one-way line. As much as crude needs to flow out of the Bakken and the country’s 70 other shale plays, supplies also need to move in. Even in areas like the Marcellus (PA/WV) and Utica (OH) shales, where carload volume growth is substantially less than the Bakken, railroads remain busy transporting frac sand, pipe, chemicals, and other commodities needed for shale exploration and drilling. Not only are railroad companies adding rolling stock, some oil and gas production companies are also considering making investments in rail. Phillips 66 said last year it might buy as many as 2000 freight cars.

The result is a dramatic renewal in the freight car building industry. Although tanker cars make up only 20% of the rail fleet, orders for new tank cars accounted for 81% of 24,000-unit total during the first quarter of 2013. Car builders with tanker car capabilities have more than enough work to keep their production lines at full capacity. For the first time in generations, backlogs are not unusual.

Natural gas and its by-products are used for heating, power generation, and as a feedstock (or raw material) in multiple chemical and manufacturing processes. With shale production up, US natural gas prices have dipped to mid-1970s levels: 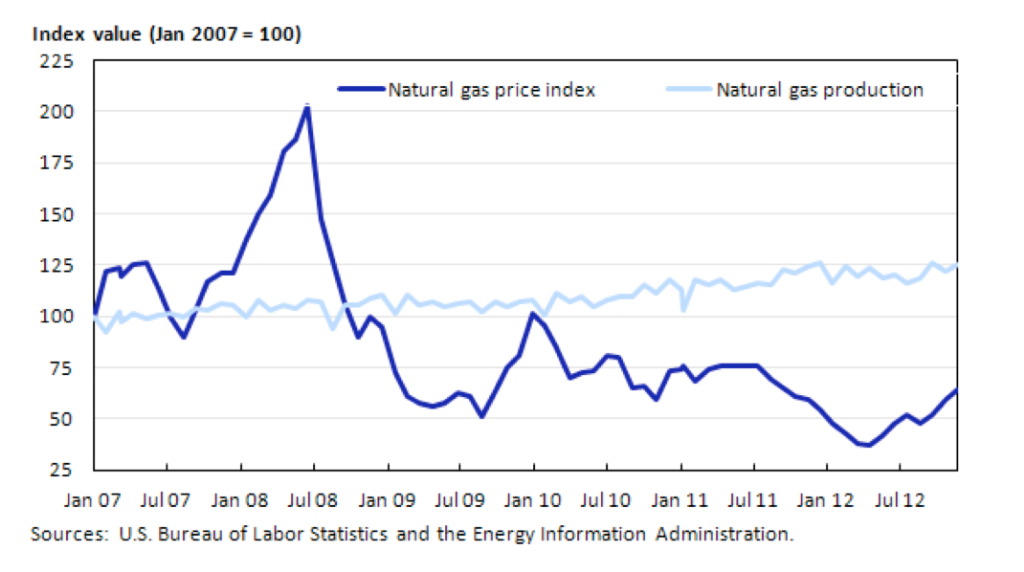 When natural gas prices drop, so do energy costs. What invariably follows are cheaper manufacturing, rising factory employment and productivity, and lower-cost goods. In fact, US factory employment has already grown by about 3.6% to roughly 12 million people from a 2010 post-recession low. The National Association of Manufacturers indicates that if the current trend continues, it will help drive the potential for 1 million new manufacturing workers by 2025. A 25% increase in the supply of ethane (a liquid derived from shale gas) would give US manufacturers an advantage over many global competitors, says the American Chemistry Council, spurring as much as $16.2 billion in capital investment by the chemical industry.

On the topic of international competition, it’s interesting to note that some foreign companies have responded to lower US feedstock prices and the drop in wholesale electricity by placing their own manufacturing facilities in this country, creating jobs for US workers. An Austrian steelmaker, German chemical giant, French oil and pipeline company, and South African energy and chemical business are among those who’ve recently built US plants.

Like powerful steering currents, drilling in these rich shale formations is helping other diverse industries head in the right direction. Here’s just a sampling:

Shale expansion has been compared aptly to gale force winds: vast, strong, and sustained. Its benefits are transforming the industrial economic landscape for the foreseeable future.