Bakken DDS shows the extent of shale drilling in the state.

North Dakota is the nation’s second largest oil-producing state, playing second fiddle only to Texas after surpassing Alaska and California in early 2012 due to its surge in shale production.  To put this surge into perspective:  North Dakota’s oil production lagged behind seven other states in 2006. 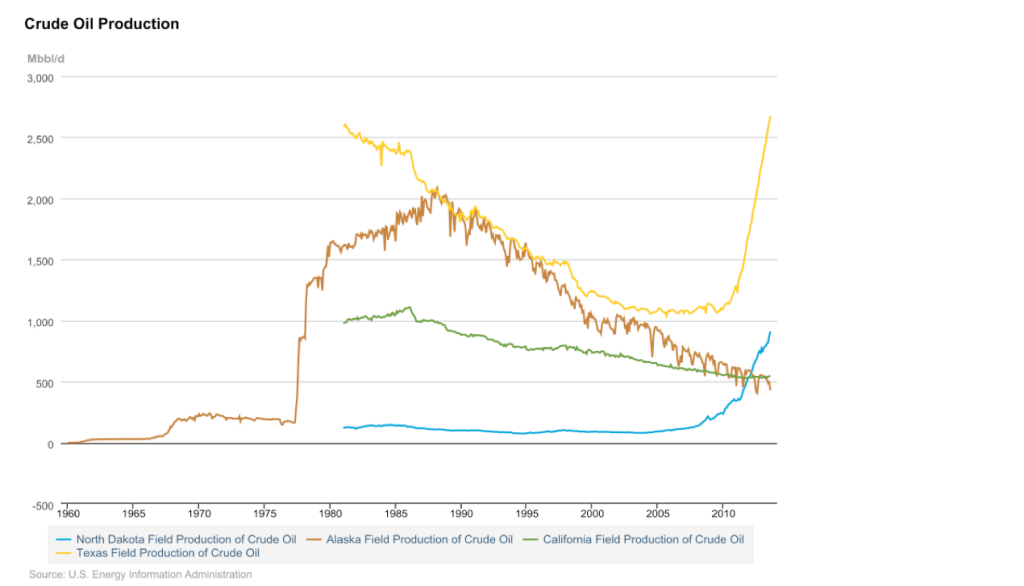 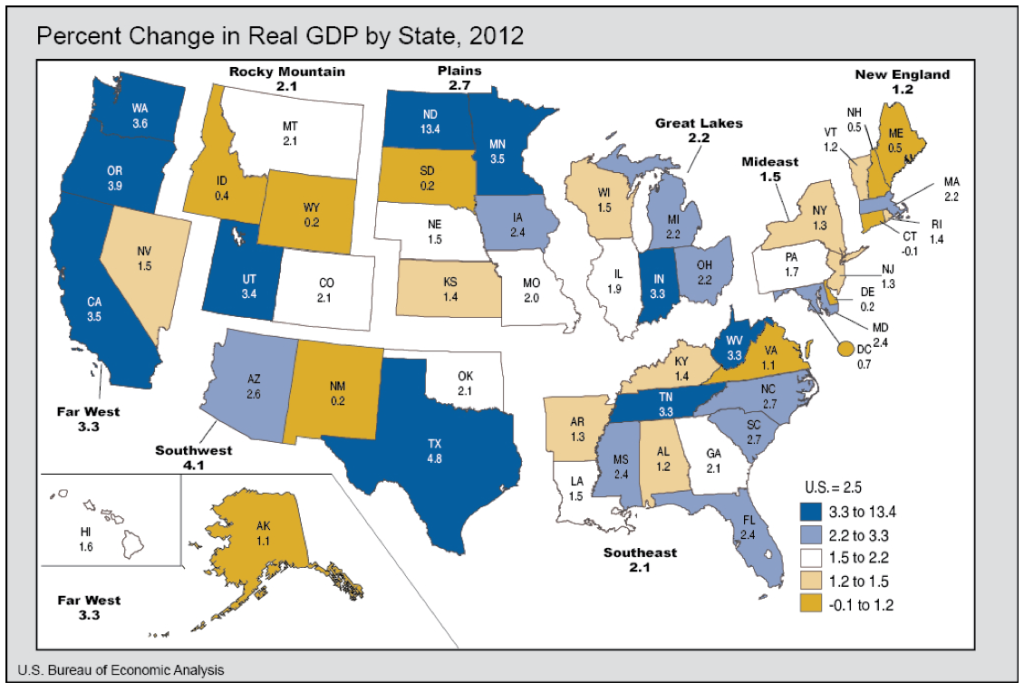 Real GDP change is yet another category clearly in North Dakota’s pocket.

As the stand-out example of the state’s oil surge, the Bakken accounts for more than 90% of North Dakota’s oil production. During the record-setting July, the play surged by 50,000 barrels per day to exceed 800,000 barrels per day.  Even with the tremendous production that has cropped up in the short time since the Bakken’s bounty was discovered, oilfield service corporations have barely scratched the surface of what this abundant natural resource will yield.  Ultimate production could likely exceed 12 billion barrels of recoverable oil and 2 trillion cubic feet of natural gas.

The surge in shale production is responsible for putting North Dakota at the top of many statistical lists.  This rank-climber boasts a robust state economy with a billion-dollar budget surplus, not to mention a tripling in the number of taxpayers reporting adjusted gross income in excess of $1 million.

Climbing GDP:  The state gross domestic product (GDP) per capita was 29% above the national average at $55,250 in 2012 – quite a climb since ranking 38th out of 50 states in 2001. North Dakota also saw the highest annual increase in real per capita GDP of any state in 2012 for the second consecutive year.  Real per capita GDP increased by 13.4% in 2012  (compared with the national growth rate of less than 2% or even the state with the next highest growth, Texas, at 4.8%).

North Dakota GDP tracks above the rest of the nation.

Exploding Population:  North Dakota has the highest rate of population growth, leading all states in net migration: The July 2012 Census Bureau population estimate (699,628) reflects a 4% increase in just two years.  Meanwhile, the overall US population rose only 1.7%.  What’s more, the state’s oil-producing regions can anticipate their populations to increase yet another 50% over the next 20 years.  At the heart of the oil boom, Williams County is bracing for a meteoric expansion of 8% by the start of the next decade.

Soaring Urban Development:  Housing and commercial properties are mushrooming throughout the state to keep up with this continuing influx of new workers.  The city of Williston, county seat of Williams County in the Bakken’s epicenter, is the fastest-growing area in the nation.  Construction and remodeling permit valuations in the city exceeded $470 million in 2012, and the city has added a dozen new hotels since 2010.  At least six new housing units are being built in Williston every day, for 2,000-3,000 every year.

In addition to homes and businesses, the shale gale has reinforced the dire need for infrastructure enhancements on roads and state highway systems.  In February 2011, Governor Jack Dalrymple allocated $720 million for work on state highways and roads, to accommodate the escalation in traffic.  In fact, it’s said that one highway – that workers expanded from two to six lanes – went from 1,400 vehicles a day to 14,000.

Skyrocketing Employment:  All this extensive development in infrastructure will continue to feed the need for workers.  A February 2011 Gallup poll declared that North Dakota has the best job market in the country.

Since then, the state’s overall unemployment rate has remained the nation’s lowest, pulling 3.2% in 2012.  The Bakken region’s outlook was even stronger, with a scant 1.8% jobless rate.  In a short three-year timeframe from 2009-2012, employment increased by more than 60% in the Bakken area’s 12 counties, with an estimated that 14,000 in Williston alone.

The oil industry estimates some 58,000 jobs in North Dakota, both directly working on the production and supporting the drilling industry. What’s more, a demand for workers leads to escalating wages for all industries.  This trend is especially in the Bakken region, where average weekly wages are up 40% since 2009.

In August 2013, employment had expanded by 3.2% over the previous year.  An estimated 13,800 more jobs existed, with the most gains in Mining & Logging, Construction, Professional & Business Services, and Financial Activities: 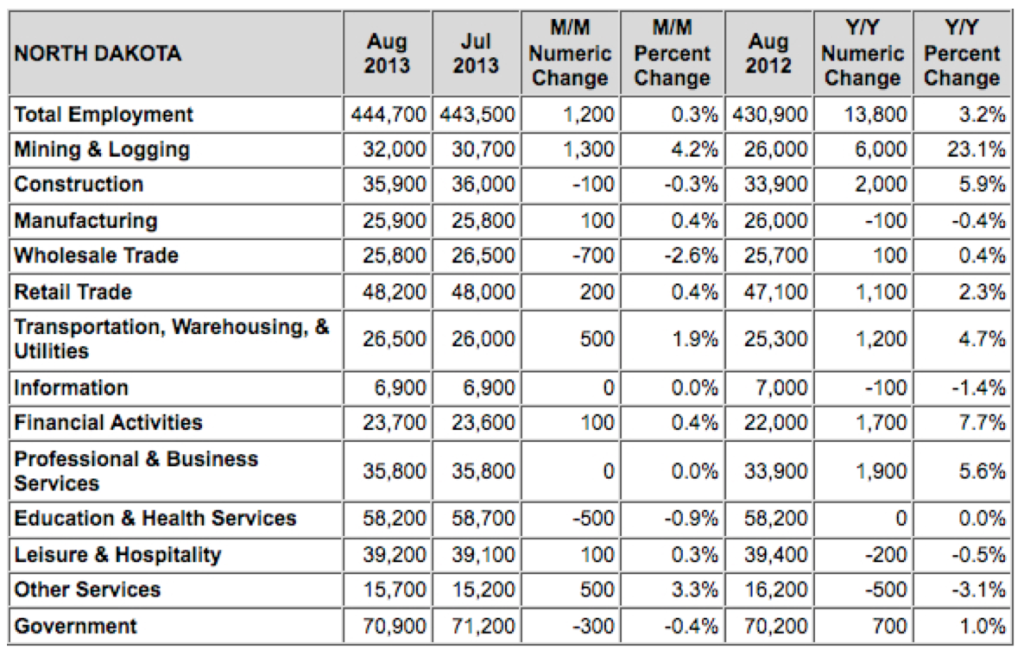 North Dakota’s chart-topping statistics should make for a rosy economic outlook.  But this booming growth has not been easy on the local communities, as a plethora of economic obstacles are preventing the state from really flourishing in this time of expansion.

For one, state fiscal policies are skewed so that individual municipalities don’t see much of the shale-generated wealth.  In 2012, the state pumped out $18 million worth of oil.  Even though a majority of the drilling is in the Williston area, its county only pulled in $1.5 million in state O&G taxes.  (And the disparity is even more visible when compared with neighboring states:  While municipalities in Colorado saw 63%, Montana 39%, and Wyoming 35%, the 19 North Dakota counties most affected by the Bakken boom received a lowly 11.2% of state revenue from O&G ventures in fiscal 2012-2013.)

For another, those local revenues can’t cover all the expenses needed to keep up with the stresses to the infrastructure.  The city of Williston, for example – widely regarded as the epicenter for Bakken activity – has an official population around 16,000.  City officials claim that it serves more than double that number:  some 38,000 folks rely on city services, and caring for all these extra bodies is straining the city system and draining its coffers.  New infrastructure necessary to keep up with the influx of Bakken oil workers could run into the neighborhood of $625 million, with improvements needed at the airport, on roads, water supplies, and other basic facilities.  In fact, the city’s wastewater treatment facility is reaching capacity – if upgrades (with price tags upwards of $100 million) don’t happen soon, the city might be forced to halt building permits and restrict further development.

A third consternation throughout the state is the clogged construction market.  To accommodate the mass influx of workers, construction activity is up dramatically in each of three private development sectors: apartments, single-family homes, and commercial real estate.  Even still, thousands of workers inhabit temporary lodgings from “man camps” to long-term hotel rooms to vehicles.  Compounding the frustration, the construction industry encounters severe barriers to expanding development – even basic supplies like concrete and other building materials have become scarce commodities.

Then, even once the new facilities are built, the region can’t supply the workforce to support commercial enterprises – in large part due to the housing crunch.  Take, for example, the fast food industry:  A newly built McDonald’s in the Bakken region was forced to delay its opening due to short staffing.  The chain pulled out all the stops, offering high hourly wages, signing bonuses, and medical benefits.

And then there’s health care.  While typical emergency rooms are notoriously slow, medical care in the Bakken area almost stands still.  Williston’s only hospital has seen emergency room visits increase 50% in a year and now has average wait times of at least 2 hours – even after a $25 million expansion that doubled the emergency ward.  Overworked hospital staff turn away 30% of the requested medical services each day because there aren’t enough health care providers.

Officials are expecting the Bakken to be productive for at least another two decades.  Unfortunately, keeping up with today’s momentum leaves little time to plan for those coming decades.  At least for now, policymakers have back-burnered proactive strategy to focus on reactive decision-making.