Off to the Races: Shale Boom Creates a Refinery Revival

As the domestic energy industry races to become self-sufficient – if not emerge eventually as a global titan, at least in the natural gas realm – one segment that’s been a straggler is finally stepping up.  That’s refining.

America’s refineries provide fuel.  They furnish raw materials used by an enormous number of manufacturers.  They sustain hundreds of thousands of well-paid jobs.

But more than one oil and gas observer has referred to them as the industry’s difficult stepchild, expensive and risky to run, with less reliable profits than exploration or production.  The New York Times called refineries a “low-margin headache” and reported that several large integrated oil companies – including ConocoPhillips, Marathon Oil, and BP – have recently sold refineries or shed entire refining businesses.

Another  issue?  US refineries are old.  Some were built a hundred years ago, and even the newest large capacity refinery is somewhat of a relic, dating back to the Carter administration.

Aging refineries are, for the most part, ill-equipped to meet expanding production goals or increasingly stringent regulatory standards without high-priced modernization programs that can easily reach the billion-dollar range.  And getting the green light for those vast upgrades is a time-consuming process fraught with red tape and government hurdles.

Refineries are also complex industrial behemoths that have been engineered to produce the most profitable mix from selected crude oils.  Because the nation has been dependent on foreign imports for so long, the majority of US refineries are set up to run heavy sour crudes, like oil from Mexico, Venezuela, and Canada.  The light, sweet crude derived from the domestic shale drilling?  Not so much…

With Shale Prices Below Benchmarks, Investments Pay Off

On the other hand, the shale boom has allowed refiners to buy crude well below international benchmark prices, sometimes at a $20-per-barrel discount. (Historically, American crudes were priced 50 cents to a dollar higher than international crudes.) As a result, refineries closest to the newly drilled North Dakota and Texas shale fields are experiencing soaring profits.

For one East Coast refinery that was set to close down, vast supplies of light, sweet, inexpensive domestic shale crude have been the key to its revival.

Sunoco Inc.’s Philadelphia refinery – the largest fuel-production plant in the Northeast, covering more than two square miles on the city’s south side and producing 330,000 barrels per day – was on the verge of closing last July, taking with it 850 direct jobs and thousands of contract positions. Its dependence upon expensive imported petroleum meant the facility was losing $1 million a day on fuel production.

Now, with a new equity partner at the helm, the refinery is being recast as an energy and chemical industrial site.  Immediate upgrades will cost about $200 million, although the total capital investment is not being disclosed.  The refinery is already getting about 10% of its crude from the Bakken, and it will use a $10 million grant from PENNDOT to construct a terminal for the high-speed unloading of railcars carrying crude from new oil-shale formations in North Dakota, Colorado, and Texas.

Refineries Reborn, from the East Coast to Texas to North Dakota

Nearby, Sunoco’s shuttered Marcus Hook refinery is also undergoing a transformation.  The company’s pipeline subsidiary plans to use the closed facility to process natural gas products from the Marcellus shale.  In Trainer, Pennsylvania, a former ConocoPhillips refinery has been purchased by Delta Air Lines, which is looking to produce jet fuel.

And in Texas – long synonymous with oil and gas activity – there’s a refinery construction marathon along the upper edge of Galveston Bay.  For years, ExxonMobil’s massive complex in Baytown, Texas, placed first among the nation’s largest refineries.  That ranking was recently toppled, though, by a newly expanded Motiva facility in Port Arthur, Texas, 70 miles away.  Not to be kept out of the running, however, ExxonMobil is planning to spend billions on an expansion project of its own.  The Baytown Chevron Phillips petrochemical plant is also being readied for an upgrade, to the tune of $5 billion.

Closer to the Eagle Ford shale play, San Antonio’s Three Rivers plant has undergone a $50 million upgrade to keep up with southern Texas shale growth.  And to think, just five years ago, owner Valero – the world’s largest independent refiner – had considered selling the midsize operation because it was barely making a return producing gasoline and diesel fuel from crude oil!

Despite the flurry of shale activity in North Dakota over the past decade, the state has tottered along with one lone refinery, in Bismarck.  Although thousands of barrels of oil flow out each day, North Dakota has had to rely on refineries in the Gulf Coast and elsewhere to furnish at least half of its roughly 53,000-barrel daily consumption.

But finally three small North Dakota refineries are in the development stages.  The goal: take advantage of low-cost Bakken crude to satisfy the 80% spike in demand for diesel fuel, coming mostly from the rigs, trucks, and trains involved in shale production and transport. When the three new refineries are on line, they’ll add about 60,000 barrels per day into the mix.

Refinery developers in North Dakota are a fortunate breed.  The state’s population density is among the lowest in the nation, so there’s ample open space for new facilities.  More to the point, North Dakota is also fairly immune to the political, environmental, and community opposition that have tripped up other refinery projects.

In California, on the other hand, four refineries shut down over the last two decades rather than invest in expensive upgrades to comply with fuel regulations. Compliance costs and constraints on moving crude oil to East Coast refineries have further balanced overburdened balance sheets.

But the government isn’t always the bad guy. Tax credits, tax abatements, and taxpayer-funded support in the form of state grants – like the one that helped rescue the Philadelphia refinery and the $11+ million that Texas oil and gas companies recently received for new plants and offices – are part of an increasing number of public-private partnerships aimed at saving jobs and boosting local economies.

Those efforts may signal greater appreciation for the role refineries play in the American economy.  The industry makes an annual contribution equaling billions of dollars to federal, state, and local treasuries through tax payments.  Between 2008 and 2010, the US refining industry spent more than $28 billion on capital expenditures to maintain competitiveness and environmental performance: 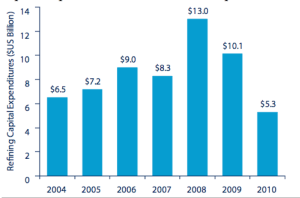 What’s more, refining employs more than 500,000 American workers across the country, in both direct and indirect jobs:

If the US wants to outlap foreign petroleum producers and lessen our reliance on international refineries, continuing government support for new and improved domestic refineries is essential.  It could, in fact, be the best way for American refiners to help a shale-fueled oil and gas industry stay on track.
Social Share