Where the Good Money Is: How the US Economy Benefits from Shale

With the possible exception of some staunch gambling opponents, most people would bet on a 400-to-1 favorite.

Those odds represent the upside of continued US shale development, says a group of Yale economics grads who set out in 2011 to quantify how much the nation was gaining from shale. “The Arithmetic of Shale” concludes that the benefits of developing shale gas plays exceed costs to the community by 400-to-1.

In other words, the enormous positive effects of unconventional drilling dramatically outweigh any possible problems.  And that includes even the worst-case environmental scenario the authors themselves posed (more about that to follow).

What’s more, the cumulative fiscal impact affects all Americans, not just energy workers or people who live in a producing region.

Despite the authors’ pedigrees – many are oil and gas industry executives – they weren’t out to stack the deck in their favor.  Their approach was comprehensive and balanced.

For starters, they looked at falling natural gas prices.  Between pre-boom 2008 and 2011, the nominal average price dropped from $7.97 per mcf to $3.95 per mcf.  Multiply the difference by the 25.6 trillion cubic feet the US consumed in 2008, and the result is stunning: thanks to shale, America was paying $103 billion less for natural gas each year.

Not only does that mean cheaper fuel, it also equates to cheaper feedstocks for manufacturing.  That translates into a whole lot of less-expensive consumer products – from tires to textiles, paper to paint – which props up domestic spending.  One more thing: not having to import massive quantities of liquid natural gas probably cut $50 billion per year from our national natural gas bill.

But the “Arithmetic” authors acknowledge that this isn’t merely a numbers game.  Environmental safety, for instance, matters to everyone on both sides of the unconventional drilling debate.  To get a grasp on incidents that might have resulted in groundwater contamination – a chief concern – the group looked at reports describing accidents, misuse of technology, and other issues like poor well design.

Out of an abundance of statistical caution, the authors decided to calculate the costs of a hypothetical spill scenario:  What would happen if, out of 10,000 new wells drilled annually, there were 100 spills each year?  Estimating that each incident caused 5000 gallons of polluted water to overflow into a field, the cost to clear and dispose of the contaminated soil would be about $2.5 million.  For 100 incidents, that’s $250 million.

Of course, those are pretty abstract numbers for individual consumers to relate to.  On a more human scale, consider this simple statistic: in 2012, the average consumer could expect to find an extra $145 in his or her wallet because of lower home utility bills from abundant, affordable natural gas.  Tack on the effects of lower product prices and higher wages generated by cheaper fuel, and the figure comes to more than $1,200 per household. 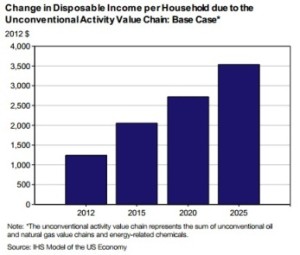 Experts suggest that this multiplier effect is likely to continue well into the future.  IHS Global Insight, a provider of market and economic information, says that household disposable income from increased activity in the shale value chain should reach $2,000 by 2015.  Looking down the road to 2025, the organization predicts that households gain more than $3,500 per year.

Because America is a nation of spenders, not savers, it’s likely that 95% of each individual windfall will be plowed right back into the marketplace. Although those dollars represent just a fraction of total consumer spending, they of course add to overall economic growth.

Disposable income goes up, thanks to shale.

Upping the Ante: Investing in America

An even more significant boost to the country’s coffers has come from capital expenditures by oil and gas companies since the shale boom began.  Unlike many other US industries that rely on foreign products and services, unconventional oil and natural gas activity is supported by an extensive domestic supply chain.  A larger portion of the dollars spent here, stay here.  And we’re not just talking about small change.

In 2012, spending on drilling, completion, facilities, and gathering systems reached $87.3 billion.  That figure is expected to more than double by 2012 (to $172.5 billion) and more than quadruple by 2035, when it should reach $353.1 billion.  Overall, between now and 2035, the energy industry will invest more than $5.1 trillion in energy development in the United States.

During the same 22-year period, the increased production of goods and services related to continued shale development could contribute as much as $475 billion to GDP.  Tax revenue will also expand:  By 2035, the cumulative tax contribution from the oil and gas revolution will surpass $2.5 trillion.  About half of that will go to the federal government, which might consider this source as it struggles to develop long-term strategies for reducing the national debt.

The extensive domestic supply chain associated with shale production means that even states that aren’t participating in shale extraction are benefiting financially, including an increase in state and local tax revenues stemming from shale production (in millions).

And then there’s job creation, easily a top priority for most Americans.

IHS says that the unconventional oil and gas industry will support 3.3 million jobs by 2020 and 3.9 million just five years later.  Jobs are being created on three fronts: directly related (e.g., at oil exploration companies), indirectly-related (e.g., in supply industries), and induced.  That last category includes positions in consumer goods and services, like the restaurant server who takes the order of the driller with income to spend.

Naturally, the employment surge is strongest in producing states, where tens or even hundreds of thousands of new jobs have been added.  Just look at these numbers from Texas (where shale development has created 575,000 jobs to date); Pennsylvania (102,600 jobs); California (96,500 jobs); Louisiana (78,900 jobs); and Colorado (77,600 jobs).  It’s hard to imagine any other single industry contributing more than that.

Who Profits? We All Do.

Clearly, consumers and companies across the country are cashing in on the benefits of unconventional drilling activity.  Whether it’s a family saving on their home heating bill, a chemical refinery turning a bigger profit because raw materials cost less, or even the government earning sky-high tax revenues, the good money is on shale.