Shale to the King: Could the Shale Revolution Pump New Life into Alaska’s Oil and Gas Industry?

For the past 40 years, Alaska’s economy has been supported almost exclusively by its oil and gas industry.  As a matter of fact, about 93% of the state’s general fund revenues come from oil production, and about one-third of its jobs are oil-related.  To put it in perspective just how important oil is to the state’s economy, a study released by the University of Alaska’s Institute for Social and Economic Research (ISER) found that, without oil, the state’s economy would be only half its current size.

Alaska has always been a top US oil producer, with more than 17 billion barrels of oil under its belt since becoming a state in 1959.  At times, the state has accounted for 20% to 25% of the nation’s entire domestic production.

But the times they are a-changin’: Recent declining production and falling oil prices are fostering a bleak outlook for Alaska’s economy.  Since Alaska’s oil peak in 1988, when 2.1 million barrels were produced per day, production has dwindled down steadily, reaching its lowest point of just 536,000 barrels per day in 2012.

For the first time in nearly a decade, Alaska’s budget has been forced into deficit spending as its oil revenues sag.  Over the course of just three years, the state has seen a radical change, from billion-dollar surpluses to billion-dollar deficits. Because around 90% of the state’s public budget is provided by oil-related revenues, the state has no income or sales tax.  In other words: if the oil industry fails, the state fails.

Why this dramatic decline in Alaska’s oil production?  Experts cite many reasons, both political and geological, but the one thing everyone seems to agree upon is that at least part of the decline is due to the fact that 40 years of drilling has simply reduced the supply of easy-to-attain oil.

The Oil King Gets Dethroned

Alaska’s economic and oil production struggles are compounded by the fact that many of the key players in the industry are turning their attention south to the lower 48. Thanks to a boom in shale production – driven mainly by the technological advances of horizontal drilling and hydraulic fracturing (a technique that involves blasting a mixture of water, sand, and chemicals at a high pressure to release trapped oil and gas) – US oil production has skyrocketed in recent years.

According to the Congressional Research Service, US annual crude oil production rose by 1.5 million barrels per day between 2008 and 2012.  About 92% of the increase came from shale and tight oil formations in Texas and North Dakota. 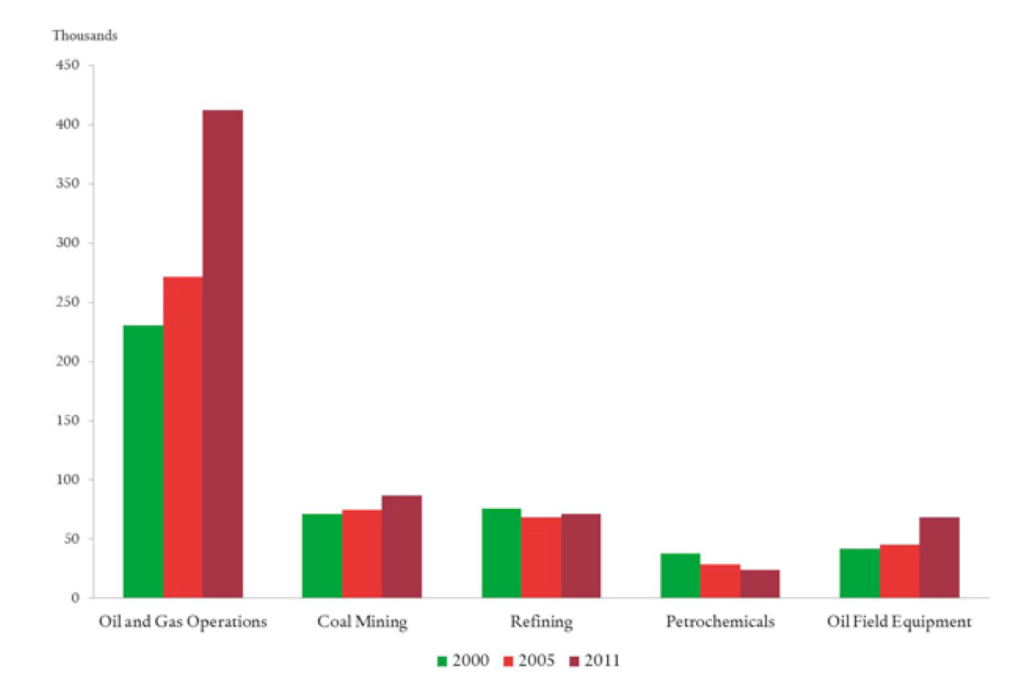 The “Shale Revolution” in the lower 48 has proven incredibly beneficial to the US on multiple fronts.  Not only has this modern-day oil boom led to solid job growth, but it’s also reducing the nation’s dependence on foreign oil, a vulnerability the US has struggled with for decades.

And the positive economic impact of domestic shale oil and gas isn’t expected to go away any time soon.  According to a report by Purdue University energy economists, the nation’s gross domestic product is expected to increase by an average of 3.5% annually through 2035.  The US is also on track to become the world’s top oil producer and net exporter of natural gas by 2020.

But while this boom – which many scholars refer to as “a game changer for the US economy” – is great for states like Texas and North Dakota, it’s been a bust for the former leader of the US pack.  A peak at the numbers shows just how far Alaska’s crude oil production has fallen: 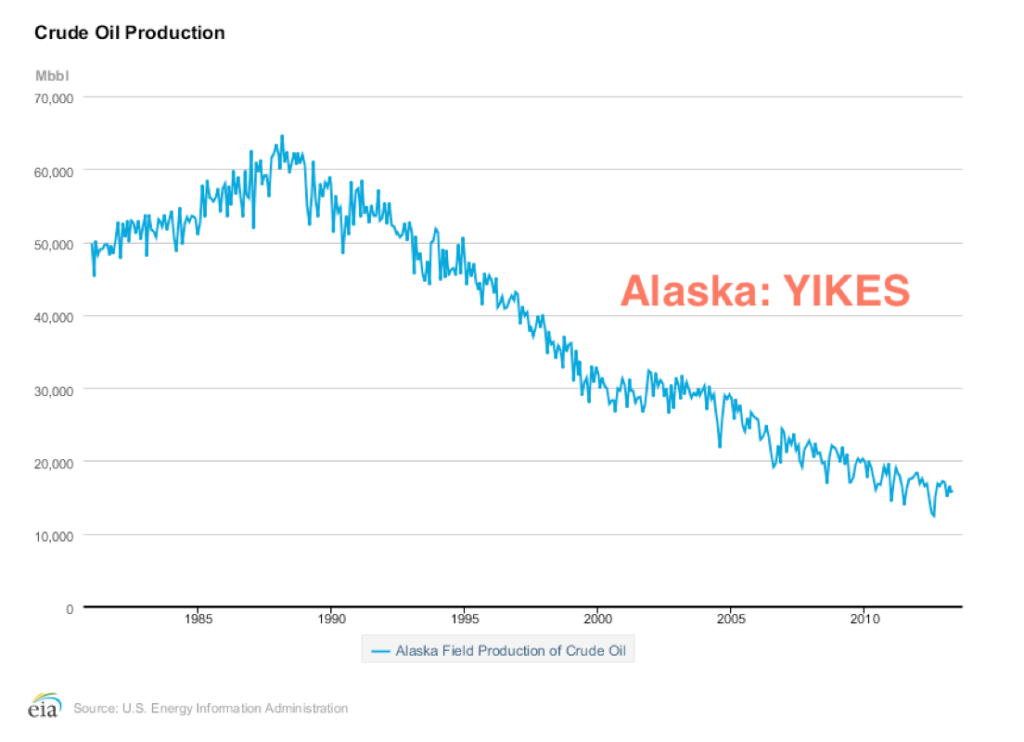 Home of the Next Great Shale Boom?

With its oil fields waning and its position as the top oil producer stripped away, it’s not surprising that Alaska is exploring its own unconventional oil opportunities.  Taking inspiration from the increased shale activity in North Dakota, Texas, Pennsylvania, and other lower-48 siblings, Alaska is now pursuing its own shale oil development.  If things go as expected, the state could once again take its place atop the nation’s oil production ranks.

As with shale developments across the lower 48, speculations in Alaska point to combining the technologies of hydraulic fracturing (“fracking”) and horizontal drilling, two innovations that have greatly improved the efficiency of oil and gas recovery and ushered in the shale boom.

Most industry experts are pinning their hopes on Alaska’s North Slope.  While the region’s supply of easy-to-recover oil has dwindled in recent years, many believe that much more oil remains trapped in its shale rock.

The US Geological Survey estimated that the North Slope’s shale rock, which spans from the Chukchi Sea on the west all the way to the Arctic National Wildlife Refuge on the east, could hold as much as 2 billion barrels of recoverable oil.  That would make it the second-biggest deposit of unconventional crude after North Dakota’s Bakken and more than Texas’ Eagle Ford. The North Slope region could also contain as much as 80 trillion cubic feet of natural gas, which would make it the fourth-largest gas-shale deposit in the country.

Of course, no one knows for sure how much of the oil can be recovered from the North Slope’s source rock, or if it can be recovered at an economically viable rate.  Regardless, petroleum geologist Ed Duncan, president and CEO of Great Bear Petroleum LLC, has wasted no time in going all-in on Alaska’s North Slope shale fields.  In 2010, his company leased 500,000 acres of land in the region, believing it to be America’s next huge shale play.  The company plans to begin its shale development program in 2014.

If Alaska hopes to see its own shale oil boom, it will have to overcome a few unique – and not inconsequential – obstacles along the way.

While the North Slope boasts an abundant water and sand supply for fracking, a lack of rigs and other drilling/completion equipment combined with a shortage of trained workers is stalling development in the area.  Due to supply chain issues, getting rigs to the North Slope has proven difficult.  According to Duncan, “You don’t have a lot of materials. You have companies competing for few rigs. The rig rates are high. Labor costs are high. Material costs are high on the North Slope.”

Another obstacle that Alaska may need to overcome if it hopes to reverse its economy’s downward spiral is its own legislation.  In April 2013, the state legislature approved a huge tax cut for top oil producers.  Supporters of the legislation believe it will incentivize oil companies to kick lagging production into full gear, helping the state get its economy back on track.

But not everyone sees the new legislation in such a positive light.  Critics argue that the tax cut won’t do much to spur production, and, in the process, it will cause the state to lose billions of dollars in tax revenue from the oil and gas industry.

Policy aside, one thing is for certain: the production lag needs to be remedied soon, or else the state’s economy will continue to weaken.  If, on the other hand, Alaskan shale can indeed revolutionize the state’s oil & gas industry, locals and the nation as a whole stand to gain.  As Interior Secretary Ken Salazar put it, “Alaska’s energy resources hold great promise and economic opportunity for the American people.”

That’s a lot of pressure.  Can Alaska replicate the shale oil revolution currently taking place across the lower 48?  It’s still too early to tell, but many have their fingers crossed.