Experts Divide on the Sustainability of the “Shale Revolution”

Shale oil and shale gas are being heralded these days as the keys to a new era in fossil fuel production.  Some are even looking to shale production to bring about American energy independence.  As of March 2014, the once natgas-strapped US had more than 100 years’ worth of natural gas supply, and domestic crude oil production had grown by 3 million barrels since 2008.  And even other countries are likely to get in on the action:  Energy consultant Wood Mackenzie Ltd. estimates that as many as 400 shale wells could be drilled outside of US borders this year.

The long-term sustainability of this shale revolution, however, is up for debate.

Shale oil – also known as tight oil – is oil in solid form that is trapped within rock.  Extracting the shale can be difficult and expensive, but it is considered a worthwhile option in light of the finite nature of the world’s liquid oil supply.

Along the same lines, shale gas is natural gas trapped in tight rock formations.  This gas was inaccessible until horizontal drilling and hydraulic fracture technology (“fracking”) came together.

The question is, how long should we expect shale resources supplies to last?

Some analysts point out that shale wells are quickly depleted:  Although plays boast huge reserves, not all the oil and natural gas is accessible, and the amounts estimated are grossly exaggerated.  Others acknowledge that the world is a finite place:  Eventually, the earth will run out of fossil fuels – but no time soon!

Geoscientist J. David Hughes is among those in the “shale is not the solution” camp.  One of the primary reasons shale will not be ushering in a new era of oil independence, Hughes maintains, is that shale gas and shale oil wells deplete so rapidly.

“The best fields have already been tapped, and no major new field discoveries are expected; thus with average per-well productivity declining and ever-more wells (and fields) required simply to maintain production, an ‘exploration treadmill’ limits the long-term potential of shale resources,” Hughes said. 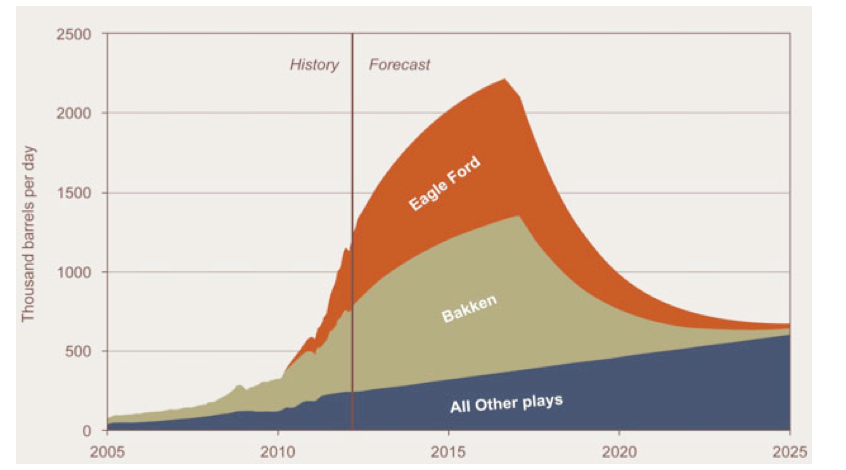 To make his argument, Hughes points out that the forecasts for some of our most important shale plays include pretty substantial decline rates.

These dramatic decline rates concern other analysts, as well.  Drillinginfo, which tracks US well performance, estimates that the production of wells bored into rock formations tends to decline by 60% to 70% in the first year.  By comparison, traditional oil wells decline 50% to 55% in two years but can keep pumping for 20 years or longer.

“Oil and gas trapped in relatively impermeable and less porous shale rock formations do not flow unaided to the well,” Deepak Gopinath explained in an article for YaleGlobal Online.  “As a result, production at shale wells tends to fall off steeply after an initial few months of high output.  Decline rates in [North Dakota’s] Bakken formation ran at more than 50% in the first year of production.  Kodiak Oil & Gas estimates that its shale oil wells in Bakken will experience declines of 75% to 85% in the first five years of production.”

What’s more, Deborah Rogers from Energy Policy Forum describes shale production as a short-term bubble that will bring higher economic and environmental costs.  According to her estimates, shale resources will be depleted in 25 years.  Essentially, she said, the drilling industry is overstating the volume of natural gas to be produced.  These huge projections are unrealistic because they don’t take into consideration the full cost of production declines of nearly 40% a year.

Then there’s Bill Powers, author of the book Cold, Hungry and in the Dark: Exploding the Natural Gas Supply Myth.  He says that shale gas production is likely to see sharp declines – sooner rather than later.  “More data points have come in supporting my views and making it very clear that the Fayetteville and Haynesville shales are now in decline, and the Barnett had a very steep 17% decline in H1/13 on a year-over-year basis,” Powers said during a recent interview with The Energy Report.  “The facts are starting to show that declines for the older shale plays such as the Barnett, Haynesville, Fayetteville, and Woodford are very serious.  More important, once production growth from the Marcellus slows down, it will no longer be able to offset declining production from shale plays as well as conventional, offshore, CBM and tight sands production, which are all in terminal decline.”

“No Need to Panic”

It’s hard to buy into all this doom and gloom, others say, in light of the wealth of shale formations in the US.  Domestic shale oil reserves hold approximately 1.5 trillion barrels of oil – more than five times more than the reserves of Saudi Araba.

Plus, we’re finding new patches of promise all the time.  Serious drilling could begin this year, for example, in the Tuscaloosa Marine Shale that stretches across mid-Louisiana into southern Mississippi.  Louisiana State University scientists estimate that the formation contains the equivalent of 7 billion barrels of oil.  While the formation’s existence has been known for years, it took advancements in technology to make commercial extraction feasible.

In March 2014, research analyst Michael Fitzsimmons reported strong replacement reserve ratios (RRRs) for shale oil producers ConocoPhillips, Continental Resources, EOG Resources, and Whiting Petroleum.  The RRR measures the amount of proved reserves added to a company’s proved reserve base in a given year in relation to the amount of oil and gas produced that year.  For a company to stay in business, its RRR must be at least 100%, or it will run out of oil.  Fitzsimmons reported a strong 2013 RRR for each of the companies he addressed:

Developments in technology are expected to play an important role in keeping the shale oil production sustainable.  The Rand Corporation recently declared, “Advances in thermally conductive in-situ conversion may enable shale-derived oil to be competitive with crude oil at prices below $40 per barrel.  If this becomes the case, oil shale development may soon occupy a very prominent position in the national energy agenda.”

In-situ mining heats the shale while still in the ground, causing the oil to leach from the rock and eliminating the need for mining shale products.  Royal Dutch Shell’s demonstration project at Mahogany Ridge, for example, produced 1,400 barrels of oil from shale with no mining at all.

Terry O’Connor of Shell has presented testimony on the process to Congress.  “The ICP (in-situ conversion process) is clearly energy-intensive, as its driving force is the injection of heat into the subsurface,” O’Connor stated.  “However, for each unit of energy used to generate power to provide heat for the ICP process, when calculated on a life cycle basis, about 3.5 units of energy are produced and treated for sales to the consumer market.”

Best Yet to Come

IHS Consulting Vice President John Larson sees a bright future for shale oil and shale gas production.  In fact, he expects a spread between US and foreign oil prices to reappear as producers keep adding wells and supplies.  The need to move that oil will be so great, he said, that IHS estimates 47,000 miles of new and expanded pipelines by 2025.  “The best is yet to come as you look at us connecting all the resources to end markets,” Larson said.  “The oil-and-gas boom is saving consumers thousands of dollars annually and tipping the scales in favor of US makers of chemicals, steel, glass, and other materials.

Futurist Lars Tvede says shale’s potential has not been exaggerated at all—in fact the opposite is true.  “The shale gas revolution will have a bigger impact than is generally reflected in the press,” Tvede said.  “It supports the emerging industrial renaissance in the States, whilst also helping to improve the country’s balance of payments.  This renaissance is very important for many reasons.  Of course, it creates jobs, but Americans will also be in a better position to innovate if they have their production where their R&D people are.”

Wherever one stands on shale gas and shale oil sustainability, the current impact of this shale revolution is obvious – especially in the US.  Developments in shale extraction technology have lowered energy costs at home and triggered economic growth across the nation.  It also has made US manufacturing cheaper and boosted hiring, leading to more consumption and possibly even more hiring.

Perhaps we have not even grasped all of the implications of shale oil and gas production, suggested Christof Rühl, Group Chief Economist and Vice-President of BP:  “The assessment of global strategic implications – for energy security, geopolitics, the global economy, or for the environment – is still trailing actual developments.”

It is fairly safe to say the full impact of shale production – in the US and the international market – has yet to be seen.