Is Russia’s Characteristic Pride Going Before an Energy-Related Fall?

Bombast might not be genetic material, but it certainly seems to be part of the DNA of Russian political and business leaders.  It clearly characterized stubby, shoe-pounding Soviet leader Nikita Khrushchev when he famously told Western ambassadors, “We will bury you,” more than 50 years ago.  And it seems that Khrushchev’s bluster has been inherited by Alexei Miller, chief executive of Gazprom, the Russian natural gas exporter that operates largely under government control (read: monopoly).  Miller, speaking in 2013 about the impact of gas from US shale fields, predicted that shale was a “bubble that will burst very soon.  We are skeptical about shale gas.  We don’t see any risks (to us) at all.” (source)

How well did Miller’s forecast hold up?

Well, just a few months after he made those comments, Fox News (source) reported that “Russian energy giant Gazprom has lost more than $280 billion in market value since 2008.  Experts on the country’s economy and governance attribute the decline to U.S. investment in the innovative oil and gas extraction technique of hydraulic fracturing, or ‘fracking,’ which dampened US demand for imports and exerted downward pressure on global gas prices and Gazprom’s profits….  Russia’s overall economic growth slumped to just 1.2% in the second quarter, significantly lower than the economic ministry’s forecast of 1.9%.”

Russia has long held a pretty enviable position in the worldwide energy market.  The country is one of the two largest oil producers in the world and was only recently overtaken by the US as number one in natural gas production.

That Russia has been graced with petroleum fortunes hasn’t inspired it to be necessarily gracious about sharing, however. In fact, Russia has been called a “gas terrorist” for regularly constricting the supply of natural gas to the eastern and central European neighbors who depend upon it for home heat.  This perverse form of punishment for governments who dared to argue with Moscow left citizens of Ukraine, Belarus, Georgia, and Moldova shivering through harsh winters. 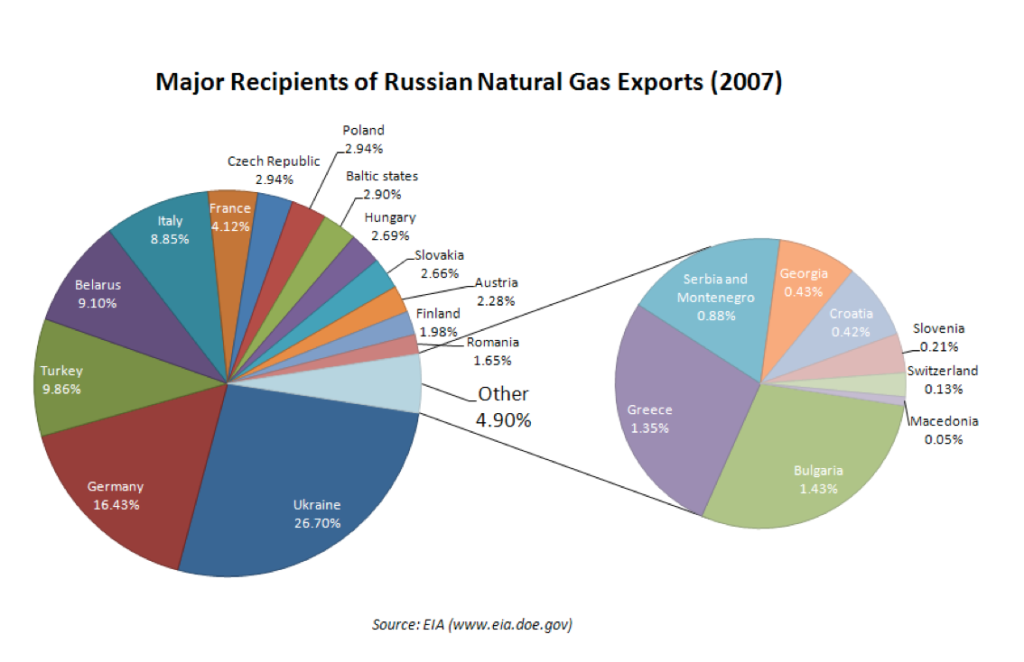 Ukraine has been particularly hard hit by Moscow playing hardball.

Gazprom has halted all supplies of gas to Ukraine twice – in 2006 and 2009 – and as of March 7 was threatening to do it again.  The earlier gas disputes had different root causes:  In 2006, Russia accused Ukraine of siphoning off for its own consumption transit supplies en route to European customers; in 2009, contract negotiations broke down.  But with 15% of all of Europe’s gas demand traveling through Ukrainian pipes, the results have been the same: disruptions for Ukraine and broader Europe, including Germany and Britain.

In 2009, the most severely affected countries were Bulgaria, which had to stop production at some of its industrial plants, and Slovakia, where a state of emergency was declared.  Now, with Ukraine in political turmoil after ousting pro-Russian leader Viktor Yanukovych during the last week in February, Gazprom is once again tightening its chokehold on Kiev.

First, Gazprom announced it was reconsidering the nearly 45% discount it had previously negotiated with Yanukovych, who has been replaced with a pro-Washington politician.  Such a reversal of fortunes for Ukraine would increase its ballooning government debt and nearly double the price of fuel.

Then on March 7, Gazprom said it was contemplating suspending the gas supply to Ukraine after Kiev failed to pay for its February deliveries, a bill amounting to $1.89 billion.  Gazprom has said it will continue transit shipments to Europe, however. (source)

Despite these threats, the days of Russia’s geopolitical bullying may be coming to a close.  For a decade, at least a third of EU gas imports have come from Russia; certain European nations, like Bulgaria, received as much as 95% of the natural gas it consumed from Gazprom.  But now the global gas glut created by North American shale development is allowing Europe to shop around, especially for liquefied natural gas (LNG) imports.  As a result, Gazprom is losing its stranglehold on the EU market.

What’s more, as gas pricing is increasingly driven by the US, Gazprom’s ability to set favorable terms for itself – mostly lengthy contracts linked to the price of oil – has been equally diminished.  Gazprom routinely bought cheap natural gas from Caspian Sea-area producers, then turned around and sold it for as much as four times the cost.  With the emergence of competition, Gazprom’s once-captive customers have more negotiating ability, and Gazprom has been forced to make painful price adjustments.  Bulgaria recently inked a new contract with Gazprom that includes a previously unheard-of 20% price decrease and a similarly rare renegotiation clause.

Moves like this can have a chilling effect on Russia’s economy and its world standing:  Russia’s resurgence as a global power after the poverty of the 1990s was largely based upon turning the country into a petrostate, dependent on Gazprom’s profits.  With Gazprom making up 10% of Russian export revenues, one-fifth of Russia’s federal budget revenues, and 40% of total GDP, any declines the company experiences leave Moscow with fewer resources and less influence.

More Shale Developments on the Map

US shale isn’t the only factor altering the European gas landscape or working to unseat Russia’s supply dominance, however.  Azerbaijan, which also has huge shale gas reserves, is building a natural gas pipeline network that will run through the Caucasus and Turkey to the borders of the EU, avoiding the Russian pipeline network altogether.  Ukraine also has shale gas deposits, which may help it diversify its source away from Russia.

Seeking to put its tumultuous history with Russia behind it once and for all, Poland, too, is striving for energy independence from Gazprom, which supplies two-thirds of the gas that Poland consumes. Poland’s shale gas reserves are among the largest in Europe, with the US Energy Information Administration (EIA) estimating the country has 148 trillion cubic feet of technically recoverable resources.  The Polish government, which has seen how disputes over gas pricing between Russia and customers Ukraine and Belarus led to shortages in Europe, has called for commercial shale gas production to begin in 2015.

That possibility is realistic when you consider that supermajors like ExxonMobil, ConocoPhillips, and Chevron are in talks or have reached deals to begin shale development in Poland.  Incidentally, those companies are also targeting shale-rich acreage in Ukraine, Bulgaria, Romania, and Lithuania, (source), where they’ll bring both needed investment and technology. 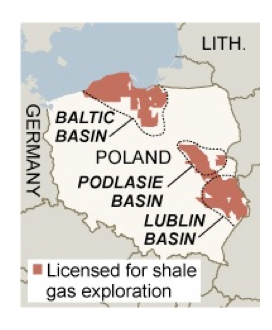 Outside of the EU, some North African nations could also pose a credible alternative to Russian natural gas supplies.  Libya and Egypt have large natural gas reserves, although production and exports have been hampered by domestic policies – so much so that Egypt announced in 2012 that it would begin importing natural gas.  Algeria, Africa’s largest exporter of natural gas, is already the third-largest supplier to Europe (behind only Russia and Norway), and the country may hold large volumes of undeveloped shale gas in addition to substantial conventional reserves.

Despite the tremors swaying Russia’s economic and political position, the country isn’t on completely shaky ground.  Both Germany and Italy, the largest importers of Russian gas, have long-term deals that will actually increase their dependence on Russia for the foreseeable future.  Likewise, Romania, Hungary, and Greece also have long-term agreements with Gazprom.

And in October 2013, Russia signed multiple contracts with China that will direct exports away from Europe to Asia. Capturing this business is a plum opportunity, considering that China – the world’s largest energy consumer – is trying to lessen its reliance on environmentally unstable coal by ramping up gas consumption.

Still, the bravado of Russian leadership is a seemingly deep-rooted trait, one that could further erode Russia’s prominence in the global energy marketplace.  When Gazprom Export CEO Aleksandr Medvedev was asked by a Russian reporter if he felt “like you’ve slept through the shale revolution,” his response was equal parts hubris and denial.

“Now, the US looks to be targeting to be self-sufficient, or even considering to export energy,” he said, ”But we are well-prepared to stay competitive, and the events of the current year are just confirming how we are restoring our competitiveness, which actually was not even damaged.”

For a country so threatened by US shale gas output increases that experts have warned of a potential 20% fall in Russian crude exports – which, in turn, would cause the Russian energy industry’s share of GDP to plummet from 40% to 15% (source) – that’s ingrained arrogance at its best.