Drilling Technology: The Evolution of the “Shale Revolution”

Revolution. That’s the word that inevitably gets thrown around anytime there’s a discussion about America’s recent surge in oil and gas production. And it makes sense:  Hydraulic fracturing (or “fracking” as it’s most commonly known) has almost completely reversed the country’s energy profile, transforming us from a nation desperate to find a plan that could make energy independence a reality to a country poised to become the world’s top oil producer by 2015 (source).

The technique that involves blasting a mixture of water, sand, and chemicals at rock formations a high pressure to release oil and gas that’s trapped inside has created the biggest boom since the housing bubble, leading to higher levels of oil and gas production in the US than just about anyone thought possible.

But revolution isn’t quite the right word to describe what has really brought us to this point.  A better description would be evolution of technology.

Here’s the thing a lot of people don’t realize: Fracking isn’t new. The initial concept of fracturing can actually be traced all the way back to the 1860s. Back then, liquid nitrogen was blasted into shallow, hard rock wells in Pennsylvania, New York, and West Virginia to coax them into flowing more readily, aiding in the recovery of oil. Think blasting nitrogen into the ground sounds hazardous?  You’re right.  The process was incredibly dangerous and often illegal, but it was pretty effective at getting the job done.  It was eventually used just as effectively with water and gas wells. By the 1930s, the idea of using nonexplosive fluids for fracturing was proposed.  Drillers experimented with using acid to stimulate wells, and it worked nicely as the acid etched out a fracture that wouldn’t close back up completely.  This allowed for better flow into the well and more efficient recovery. Although they weren’t the ultimate solution, the drilling developments of the 1930s paved the way for a commercially viable technique to evolve during the next decade.  It was then that Stanolind Oil and Gas Corporation started experimenting with hydraulically fracturing limestone formations to improve production from oil and gas wells.

In 1947, Stanolind Oil performed its first major experiment to “Hydrafrac” a well in the Hugoton gas field in Kansas.  Using 1,000 gallons of napalm-thickened gasoline, followed by a gel breaker, they tried to stimulate a limestone formation 2,400 feet beneath the surface that held gas.  While this didn’t significantly change the well’s production, it was a step in the right direction:  Decades later, hydraulic fracturing has been used to produce more than 600 trillion cubic feet of natural gas by way of more than 1.1 million successful fracking applications. But we’re getting ahead of ourselves here. In 1949, Halliburton, exclusively licensed to perform the freshly-patented Hydrafrac process, became the first company to perform a commercial fracturing operation to extract natural gas.  The first two commercial fracturing treatments were performed in Stephens County, Oklahoma, and Archer County, Texas, for  $900 and $1,000 respective price tags.  Within the first year, 332 total wells were treated using crude oil or a mixture of crude oil, gas, and sand. The results were exceptional:  The wells saw a 75% production boost on average. During the 1950s, commercial fracturing took off.  At some points, as many as 3,000 wells per month were being hydraulically fractured. When Halliburton’s patent expired in 1968, other oil and gas companies jumped into the fracking game.  That year, a record-setting one-half-million-pound fracturing job was carried out by Pan American Petroleum Corporation in the place where it all started nearly 20 years earlier:  Stephens County, Oklahoma.

Things changed for the oil and gas industry in the 1970s.  America’s oil and gas resources were dwindling, leading to an increasing reliance on foreign energy resources.  The situation came to a head in 1973, when the Arab members of the Organization of the Petroleum Exporting Countries (OPEC) decided to slash production, increase the price of oil by 70%, and then cease all oil shipments to the US for its support of Israel in the Yom Kippur War.  To say that America was hit hard with gas shortages would be an understatement.  In fact, the entire global economy was affected.  It was clear evidence that the US needed to find a way to become self-reliant for our energy needs. The government was desperate to find new means of oil and gas development.  In 1975, the Department of Energy began to fund research into fracking and horizontal drilling.  The DEO focused its efforts on studying shale formations that were known to hold oil and gas, but there was no economically viable means of extracting it.  With its Eastern Gas Shales Project in the Appalachia Basin, the DOE studied shale formations closely, learning about their characteristics, the resources they held, and the methods for extracting those resources (source). Enter George Mitchell.  This owner of the independent oil and gas company Mitchell Energy & Development was one of the few who believed that it was possible to extract shale oil and gas resources in an economical manner.  He challenged his team to make that happen, and they experimented over the next 17 years with countless tweaks to the hydraulic fracturing process.  The fracking fluids used so successfully in prior decades on limestone formations simply weren’t suited for use on shale formations, so Mitchell’s tried a plethora of combinations of various chemicals, gels, and fracking fluid recipes. And then, a breakthrough in the mid-1990s boosted the technology and gave fracking’s evolution some serious momentum.  A member of Mitchell’s team suggested using a budget formula for fracking fluid, one that consisted mostly of water instead of a gel.  It worked, and gas recovery from the shale rock increased.

Fracking and Horizontal Drilling: The Match Made in Energy Heaven

Concocting the perfect “frac juice” for shale rock was only part of the solution to fully tapping shale formations.  The final piece of the puzzle to kicking off the shale revolution – and the next step in the fracking evolution – was to combine these advancements in fracking technology with horizontal drilling techniques.  This combination of fracking and horizontal drilling has made it commercially viable to recover more oil and natural gas from shale formations than experts could ever predict. (source) Horizontal drilling is a process in which a well is first drilled vertically down into the formation, and when it reaches just above the target depth, it begins to drill horizontally out into the formation.  (Think of a large “J” or “L.”)  This allows the well to reach a much broader surface area than a standard vertical well because the natural formation of shale run horizontally.  Vertical wells only tap into the resources immediately surrounding it.  Horizontal wells provide much more contact with the rock, yielding more resources with fewer wells – and ultimately meaning bigger payouts. While horizontal drilling dates back to as early as 1929, it wasn’t widely used until the 1980s.  This time lapse was also due to the necessary evolution of technology:  The equipment, motors, and other technology used in the process took a while to see significant upgrades. 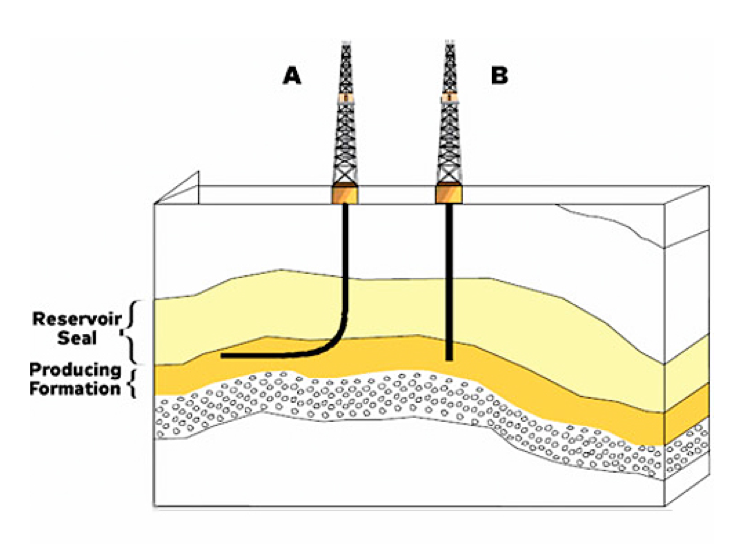 The combination of hydraulic fracturing and horizontal drilling in the early 2000s made it possible to maximize the number of natural fractures intersected in the shale, allowing for greater recovery of the resources trapped in the rock.

The New Standard in Drilling

Since the time oil and gas development started in the US, more than 4 million wells have been drilled across the country.  More than 2 million of these wells have been hydraulically fractured, and according to some estimates, as many as 95% of all new wells drilled today are fracked. (source)  What’s more, the same combination extraction technology is successful whether drillers are tapping oil or gas. And fracking is here to stay.  The National Petroleum Council estimates that between 60% and 80% of all US drilling over the next decade will require fracking in order to remain viable. Maybe it is a revolution after all.