How Keystone XL and Shale Affect Canada/US Trade: Has the Relationship Cooled? 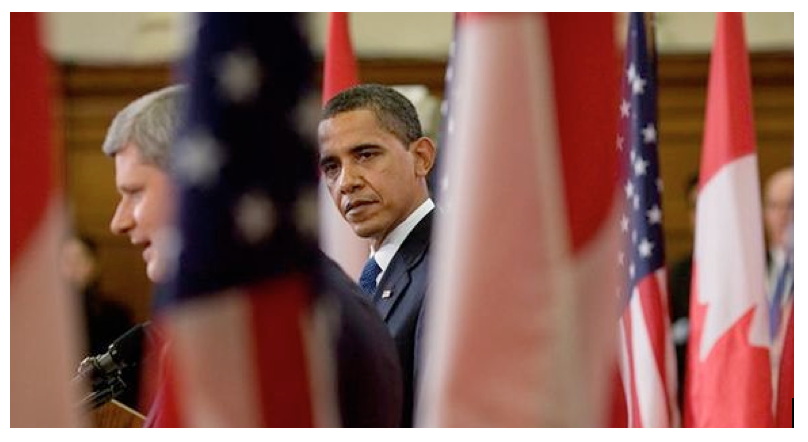 Canadian Prime Minister Stephen Harper and US President Barack Obama aren’t quite seeing eye-to-eye on the expansion of the Keystone.

Less than a week after Valentine’s Day, the Three Amigos – the collective nickname given to NAFTA bloc leaders Stephen Harper of Canada, Mexico’s Enrique Pena Nieto, and US President Barack Obama – held their annual summit.  But there was no love lost between two of the men, namely Harper and Obama, and the spat is over oil.

Specifically, Harper is losing patience with America’s foot-dragging on the approval of the proposed Keystone XL pipeline.  This $5.4 billion, 1179-mile collaboration is intended to transport some 800,000 barrels of oil per day south, all the way from the Athabasca oil sands of Alberta to American refineries in the Midwest and along the Gulf Coast of Texas and Louisiana.  The Athabasca oil sands have been producing to some degree since 1967, but rising oil prices in the early 2000s spurred rapid expansion in the area.  In fact, since 2003, Canada has invested more than $100 billion in the oil sands, and the Canadian Energy Research Institute (CERI) puts capital investment at $218 billion over the next 25 years.  Canada produces roughly two million barrels a day from the oil sands; that figure should rise to 5.2 million barrels a day by 2030, says the Canadian Association of Petroleum Producers.  Production is tied to 75,000 jobs nationwide, and employment related to the oils sands is expected to continue to surge during the next quarter century.

Those figures leave no question as to the importance of oil to the Canadian economy – nor any doubt as to why the Obama administration’s five years of dithering about green-lighting the Keystone XL project have irritated and angered the Canadians.  Already, the shortage of pipeline capacity out of Canada (as well as increased US shale production) has created localized supply gluts that have driven the price of Canadian crude well below American and international benchmarks.  Experts say that if the Keystone pipeline isn’t completed, the economics of future oil sands projects may be in question.

“People always call these things the ‘Three Amigos,’ but I would say at this point in time it’s difficult to use that term,” said Duncan Wood, director of the Mexico Institute at the Washington, DC, Woodrow Wilson International Center for Scholars. “From the Canadian point of view, Keystone is an extremely big issue, and they’ve staked a lot of the relationship with the United States on it.”

“The time for Keystone is now,” Canada’s Foreign Minister John Baird said in an address to the US Chamber of Commerce the day after the US, Canadian, and Mexican leaders met in February.  Baird said the uncertainty in Canada has become intolerable, adding that his country “can’t continue in this state of limbo.”

Aside from sharing peaceful borders, the US and Canada also share a longstanding, robust commercial relationship: Each is the other’s largest trading partner, with two-way trade between the neighbors rising 2.6% to $632 billion in 2013.  Oil sales from Canada to the US represent a significant portion of that figure:  The US imports 2.4 million barrels of oil daily from Canada – roughly twice what America brings in from Saudi Arabia. In fact, the US gets 34% of its oil from Canada – more than it imports from any other single country – and buys nearly all of the crude that Canada exports, around 97%.

Translated into plain dollars and cents: In 2010, the US purchased $92 billion worth of oil and gas from its neighbor to the north.

So what will it mean to the oil sands if Obama nixes the Keystone XL?  Well, some Canadian oil companies aren’t waiting to find out.  They’ve made it clear that they plan to continue to develop the oil sands, with or without Keystone XL.

Suncor Energy, Canada’s top petroleum producer, is chief among that group.  Suncor currently produces nearly 20% of the oil sands’ total output – about 396,000 barrels per day – and says it will grow its oil sands production in 2014 by another 10%.

Royal Dutch Shell is also ramping up its oil sands profile. In October 2013, the global energy giant announced intentions to move forward with construction of its latest oil sands venture, the $3 billion Carmon Creek project that is expected to produce 80,000 barrels per day.

Several oil sands operators have even developed an end-run around the stalled Keystone XL project, with plans to build three large rail loading terminals with a combined capacity of transporting 350,000 barrels a day. Among these is midstream company Gibson Energy’s rail terminal in Hardisty, Alberta, (incidentally, that’s where the Keystone expansion would originate) to be served by Canadian Pacific Railway with an initial capacity of 140,000 barrels a day.

Aside from America’s waffling on the Keystone XL, there’s another, perhaps even more compelling, reason for Canada to loosen its ties to the US energy market: the expansion of our domestic shale drilling.  As noted earlier, the dramatic increase in US oil production has contributed to discounted prices for Canadian crude.  If we continue on our current trajectory to becoming a net energy exporter within the next several decades, our need for Canadian crude could dry up – at just about the same time that the net amount of crude oil that Canada will have available for export is projected to reach three times its current level.

But just because the US might not require as much Canadian oil doesn’t mean there won’t be a market for it.  In fact, Canada has already begun to look to China, a market with a growing appetite for energy.  For example, Kinder Morgan – the largest midstream company in North America – is spending $5 billion to expand its Trans Mountain pipeline, which will nearly triple the capacity of oil it can ship from Edmonton, Alberta, to Canada’s west coast.  And Enbridge has received approval from Canada’s National Energy Board to move forward with its $7.4 billion Northern Gateway oil sands pipeline from Edmonton to a new marine export terminal in Kitimat, British Columbia, that will provide access to new markets in the Pacific Rim.

According to some experts, Canada has no choice but to secure new export relationships with emerging energy markets like China – where, by International Energy Agency (IEA) estimates, energy demand is expected to grow 60% by 2035.  Building Canadian West Coast capacity to move crude across the Pacific is essential to the very existence of Canada’s oil and gas industry, Vincent Lauerman, senior oil markets economist with Energy Intelligence Group, has asserted: “You either build the infrastructure to get it to markets, or you don’t build those [oilsands] projects in the first place.”

Canada also appears to be building stronger diplomatic ties to Asia, a move that generally consistent with laying the groundwork for future economic associations.  The country recently signed a Foreign Investment Promotion and Protection Agreement that gives generous investment protection to the Chinese.  Canada’s government has also approved the $15.1 billion takeover of the Canadian energy giant Nexen by the state-owned China National Offshore Oil Corporation (or CNOOC Group).  Formerly one of the harshest voices criticizing China for its human rights record, Canada even seems to have become less vocal on that’s issue – proof that economics can push other issues to the sidelines.

Canada’s growing ties with China don’t, by any means, signal an end to the long Canadian-American partnership.  The two countries were friends and business associates long before NAFTA, and the relationship isn’t built entirely on the slippery slope of oil.  There’s no real break-up in sight.  But with the US’s growing energy self-sufficiency coinciding with Canada’s efforts to secure new markets for its growing oil sands production, a trial separation – at least in the realm of oil and gas – may be in the works.