On a spring day in 1919, Galveston, Texas welcomed the baby boy who would grow up to make energy history.  George Mitchell’s story is one that starts with a humble beginning.  It’s also a story that epitomizes perseverance.

You might say that perseverance runs in Mitchell’s bloodline. Before emigrating from Greece to the US in 1901, his hardworking father Savvas Paraskevopoulos tended goats.  When he arrived at Ellis Island at the ripe young age of 20, Paraskevopoulos worked for the railroads and moved west over time.  It was here that he faced his first challenge: When his boss got tired of writing his long name on his paychecks, he threatened to fire him.  Paraskevopoulos persevered and turned the tables by taking his boss’ last name – Mitchell – so he could keep his job.  When the newly-named Mike Mitchell saw a picture of a gorgeous young woman in a local Greek newspaper, he made the trek from Galveston to Florida to ask for her hand in marriage.  One problem: She was engaged.  But once again Mike persevered, convincing her to leave her fiancé and marry him instead.

With such unyielding drive and resolve entrenched in his family’s roots, it’s no wonder that this little boy would overcome countless obstacles of his own on his way to changing the world forever.

This is the story of the “Father of Fracking.”

The Man Who Made Energy History

By all accounts, George Mitchell was a generous, humble, and hardworking man with a gambler’s spirit.  After graduating first in his class in petroleum engineering at Texas A&M University, Mitchell started his own independent oil and gas company, Mitchell Energy & Development Corp.  En route to building a Fortune 500 company, Mitchell helped pioneer what energy scholar Daniel Yergin called “the most important innovation in world energy so far this century.”

The 1970s were a bad time to be in the oil and gas business.  Analysts spread doom and gloom, saying that America’s oil and gas resources were running out.  The big oil and gas companies went global in order to survive.  The country was largely dependent on foreign energy resources, a fact painfully demonstrated in 1973 when the Arab members of the Organization of the Petroleum Exporting Countries (OPEC) decided to cut production, raise the price of oil by 70%, then to stop all oil shipments to the US for its support of Israel in the Yom Kippur War.  This led to gas shortages and sent shockwaves throughout the global economy.  It was proof that even a superpower could be brought to its knees when its energy security was threatened.

But Mitchell wasn’t a man to give up easily.  He has been described as a man with uncompromising perseverance, but those closest to him have often chosen another word to describe him: stubborn.

While others said that America’s oil and gas reserves were tapped, Mitchell steadfastly believed the solution to the problem was right below everyone’s feet.  Well, maybe not right below…  He was convinced that the enormous reserves trapped in shale rock formations deep beneath the earth could be released.  Everyone else that he was crazy and wasting his time.

It was no secret that oil and gas was trapped in shale rock, but almost no one else believed it was possible to extract it commercially.  As Yergin put it, “Until then, people didn’t talk about ‘shale gas’; if it had any name, it was ‘uneconomic gas’.”

After reading an early-1980s scholarly article that proposed it might be possible to coax out the gas trapped in shale formations, Mitchell challenged his team to figure out a way to make it happen within 10 years.  If they couldn’t do it, he warned them, he would find other people who could.

So, on a hunch that everyone else was wrong, Mitchell and his team began digging around in a spot around Fort Worth called the Barnett Shale.  To crack the code, Mitchell Energy & Development tried a number of tweaks on a process of fracturing the source rock with a pressurized fluid.  The theory was that cracking the shale through this “fracking” method would cause it to give up its gas.

A New Twist on an Old Technology

It’s important to point out that fracking wasn’t a new technology.  While George Mitchell is often called “The Father of Fracking,” he’s certainly not the inventor of this technique.  Fracking was first used way back in 1947 for drilling in limestone deposits.  But Mitchell’s moniker is not for nothing.  For one, fracking limestone and fracking shale are two completely different operations.  For another, the fracking technology as it existed in the 1980s just didn’t make shale gas extraction economically feasible.

That’s where the word perseverance comes into play again.

Mitchell’s success with fracking didn’t come overnight.  It took 17 long years for the breakthrough to occur.  His team drilled one well after another, struggling to find a way to use fracking to produce shale gas reliably and economically.  They tried just about every imaginable combination of chemicals and gels to get the perfect fracking recipe for shale, resulting in a constant stream of failures.

All the while, Mitchell never threw in the towel.  In an interview with The Economist, Mitchell said, “I never considered giving up.  Even when everyone was saying, ‘George, you’re wasting your money’.”

According to Mitchell Energy & Development geologist Dan Steward, “Some people thought it was stupid.  There’s not a lot of companies that would stay with something this long.  Most companies would have given up.”

A Little Help from an Unlikely Friend

While Mitchell rightfully gets the bulk of the credit for sparking the Shale Revolution, he benefited from the support of an unlikely ally – the federal government.

In 1975, the Department of Energy (DOE) started funding research into fracking and horizontal drilling.  The agency initiated the Eastern Gas Shales Project in the Appalachia Basin to get a better understanding of shale formations: their characteristics, the resources they held, and the methods for extracting those resources.  Mitchell’s team studied the results of the government-supported project while developing the Barnett Shale.

In all, the DOE poured about $137 million into gas research over a three-decade period.

Mitchell also benefited from the huge tax breaks that Congress passed in 1980 to encourage unconventional gas drilling.  Between 1980 and 2002, federal tax credits given to all drillers totaled to $10 billion – credits that undoubtedly helped keep Mitchell’s costs down year after year as his team tried to crack the fracking code.

And finally, it all paid off.  In 1998, 17 years after starting its Barnett Shale project, Mitchell hit pay dirt when his team tried using water instead of thick drilling fluids to frack the shale.  The idea was controversial because water has the tendency to bloat rocks, causing the much-needed fractures to shrink up.   Against all odds, it worked, turning the Barnett Shale into an instant gold mine and sparking a shale revolution that has changed the world.  With just $6 million invested into the fracking project, The Economist called it “the best development money in the history of gas.”

The Spark that Started the Shale Revolution

Mitchell might not have invented fracking, but his commitment to developing the technology – with the aid of the federal government – kick-started the shale revolution.  When Mitchell’s Barnett Shale project first began, a miniscule percentage of America’s oil and gas wells were fracked.  By 2013, that number had grown to more than 90%.

Thanks to Mitchell’s perseverance and his pioneering of the fracking process, the United States is expected to become the world’s leading oil producer by 2015, bypassing Russia and Saudi Arabia.  Fracking has already transformed the economy in states like Texas, North Dakota, and Pennsylvania, as shale deposits across the country are being tapped for their wealth of resources. 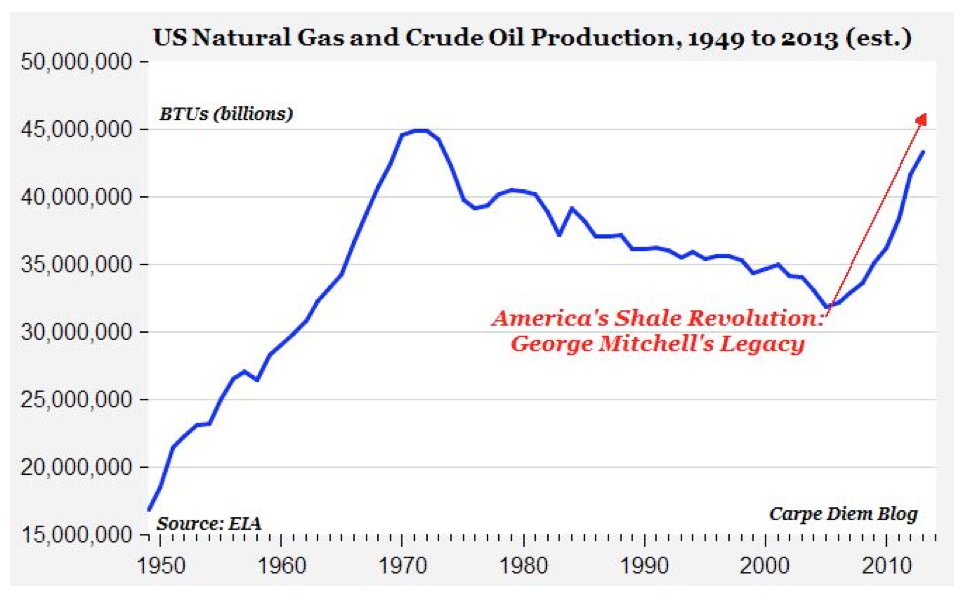 For his part, Mitchell became the first fracking billionaire, selling his company to Devon Energy for $3.5 billion in 2002.  Despite his immense wealth, he never lost sight of where he came from.  Mitchell was a true philanthropist – the most generous donor in Texas A&M history and a supporter of numerous scientific and environmental causes.  He even opted not to patent his company’s proprietary fracking process, which would have earned him exponentially more money, to keep the technology available to the public “so that the world could benefit from natural gas as an important energy and fuel source.” When Mitchell died on July 26, 2013, he left behind an estimated $750 million to his family foundation The Cynthia and George Mitchell Foundation, which supports conservation and sustainability.

Mitchell’s story epitomizes the American Dream, and more pages are still being added to it as his vision continues to drive America’s quest for energy independence.