Mexico’s Game-Changing End to its Oil and Gas Monopoly

Since 1938, Mexico’s vast petroleum resources have been controlled by Petróleos Mexicanos, or Pemex, the state-run oil and gas monopoly.  But late last year, the Mexican government changed the rules of the game.  Plagued by slumping domestic output that kept the country from taking advantage of $100-a-barrel oil – and increasingly squeezed out of the US by American shale supplies – Mexican President Enrique Pena Nieto called for sweeping energy reform.

In the country’s first major economic policy move since the 1994 NAFTA Agreement, the Mexican congress voted in December 2013 to dismantle the 75-year-old law that had established state control over oil and gas, and opened its reserves to foreign investment.  The overhaul, the government hopes, will bring both the money and the technical savvy needed to increase production at mature fields, deep-water regions, and difficult-to-access shale formations.

Team Players: US and Mexico

Mexico and the US are long-time energy trading partners, with the US primarily importing crude oil from Mexico – chiefly heavy crude but also Olmeca light sweet crude – and then exporting refined petroleum products back.  In recent years, however, the balance has been shifting.  As our own domestic oil output has risen, our overall need for imports is declining.  At the same time, Mexico is struggling to keep up with its own soaring energy demands.  So while US imports of Mexican oil have dropped from 1.8 million barrels per day in 2006 to just 881,000 barrels per day in January 2014, US exports of petroleum products to Mexico – primarily gasoline and diesel fuel – have nearly tripled.

Despite our declining need for Mexican imports, we still bring in more crude from our southern neighbor than any other country, taking about 78% of Pemex’s heavy crude production.  Mexico remains the third-largest source of US oil imports, behind only Canada and Saudi Arabia. 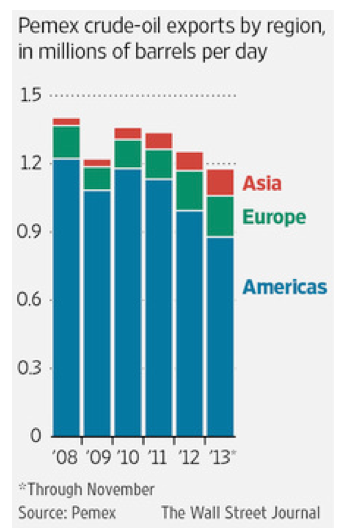 But with Mexico’s oil industry supplying one-third of the government’s income, falling US consumption of Mexican crude can have a staggering effect on that nation’s economy.  Mexico is trying to replace oil sales lost to the US because of America’s energy boom, but the gap is pretty sizable, as the graph below suggests.  Pemex exports to India and China have been on a steady trajectory over the past five years or so, and regular shipments of intermediate crude to Japan have begun.  In February 2014, Pemex is expected to make first shipment of its extra-light Olmeca crude to Europe, with product going to the Cressier refinery in Switzerland.

Struggling to Stay in the Game

A decrease in US imports isn’t the only problem Mexico hopes to counter by breaking down the barriers to foreign investment in their petroleum industry.

Mexico has been struggling with precipitous crude production declines.  In less than a decade, total Mexican production has fallen by about a third, from 3.8 million barrels per day in 2004 to 2.6 million barrels per day in 2013.  That decline is due in no small part to the fact that Mexico’s aging giant Cantarell oil field – once the second largest oil field in the world – is rapidly tapping out.  From its peak in 2004, Cantarell’s output has fallen more than 75% to just 394,000 barrels per day in 2013.  Not only did this field provide a large share of Mexico’s total oil output, there are no other fields capable of replacing it in the short term.

That’s not to suggest that the country’s reserves are completely drying up.  It’s just that a serious technology deficit keeps them out of reach.

For example, Mexico has an estimated 40-60 billion barrels in technically recoverable crude reserves in the deep-water Gulf of Mexico, but Pemex doesn’t have the expertise to drill there.  Similarly, the EIA says Mexico has the sixth-largest shale gas reserves in the world – but, again, the country lacks the technology to retrieve it.  (Of course, the deluge of light sweet crude emanating from our own shale plays in North Dakota, the Permian Basin, and the Eagle Ford means that the US appetite for additional Mexican light crude is unlikely, should those resources be developed.

The lack of drilling innovation is one reason why observers say that Pemex itself needs to shoulder much of the blame for declining production.  But other operational pitfalls such as decrepit infrastructure, high costs, and organizational inefficiency are equally at fault, according to Pemex’s critics.

The government’s attitude hasn’t helped:  Despite the fact that Pemex is a monopoly and no one else has been drilling a single barrel of Mexican oil, Pemex has never been considered a profit-making venture.  The problem is not on the production side – it costs Pemex about $7 to drill a barrel of oil that then sells for around $100.  But its refining business and petrochemicals division lose money year after year.  As a result, between 2007 and 2011, Pemex lost an accumulated 360 billion pesos, or $29 billion (although it did make a small profit in 2012).  To make matters worse, the Mexican government siphons off cash to compensate for the lack of tax revenues it collects elsewhere.  In 2011, no less than 55% of Pemex’s revenues were paid in royalties and taxes, creating a cash-flow disaster and contributing to the company’s $60 billion total debt.

Another economic drain is inefficiency, from the field to the boardroom.  In addition to what is described as “a stifling internal bureaucracy,” Pemex’s output of oil per worker seriously lags its foreign counterparts.

The entrance of international oil companies into Mexico is expected to lead to a revival of production in Mexico to 3 million barrels per day by 2018 and 3.5 million barrels by 2025.

But when foreign oil companies throw the dice on Mexico, where will they land?

Shale fields, which are more complex and difficult to drill, seem less appealing, as does the onshore Chicontepec field northeast of Mexico City.  Although Chicontepec contains an estimated 60 billion barrels in oil reserves, it lies in a geologically complex area, making extraction tough.

It appears that Mexican deep-water plays hold the biggest opportunity, particularly since premium crude is going for more than $100 per barrel.  Companies with deep-water experience can extract those reserves at the greatest profit; Russia’s Lukoil, which has Caspian Sea credentials, has already penned an agreement with Pemex to work jointly on exploration and production.  Exxon Mobil, Chevron, Royal Dutch Shell, Repsol, and Petrobras have hinted they’re interested in entering that market, too.

As the country struggles to remain competitive in the energy game, Mexico is gambling that these new foreign players will fire up the country’s lagging production.  Revamping the rules from 1938 could be the game-changer to reverse Mexico’s slump.