Are the Stresses of Middle Age too Much for Today’s Refineries?

Some observers have suggested that, when it comes to aging infrastructure, the US oil and gas industry suffers from an “out of sight, out of mind” mentality.  Critics point to old buried pipelines, some dating from the 1930s and earlier but still in service.  Not only are those pipelines invisible to the eye, they say, but the lack of government oversight regarding aging pipes means they’re often overlooked.  As a result, they don’t receive maintenance necessary to keep them running safely. Catastrophic incidents – including fatal explosions – have occurred.

Can the same argument justly be applied to refineries?  Those enormous industrial workhorses, with their towering processing units, flares, and smoke flumes, would seem pretty difficult to ignore.  Yet, despite their obvious appearance, America’s fuel factories are having their own age-related issues. 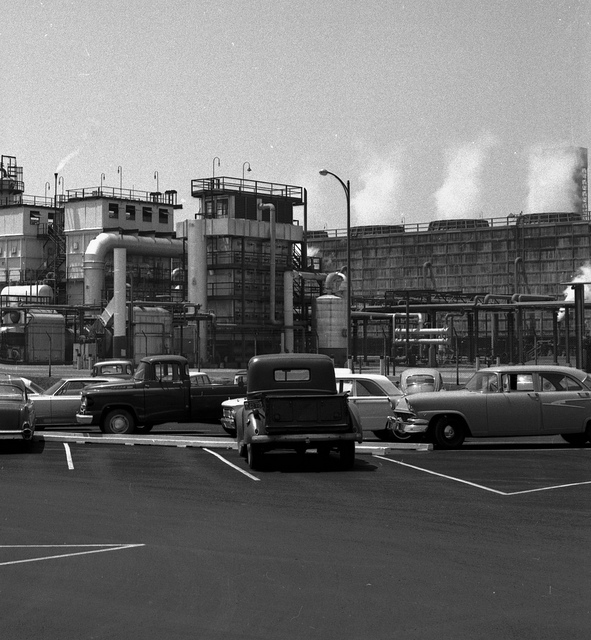 Consider this: Most US refineries are between 50 and 120 years old, with the average age right about 40.  Even the “newest” US refinery with capacity to produce more than 100,000 barrels per day dates to 1977.  Although oil refinery productivity in the US has been improving, the number of operating refineries has been dropping steadily.

In 1982, the earliest year for which the Energy Information Administration has data, there were 301 operable refineries, producing about 17.9 million barrels of oil per day.  Today there are only 149 refineries, but they’re producing 17.4 million barrels – less than in 1982, but more than any year since then: 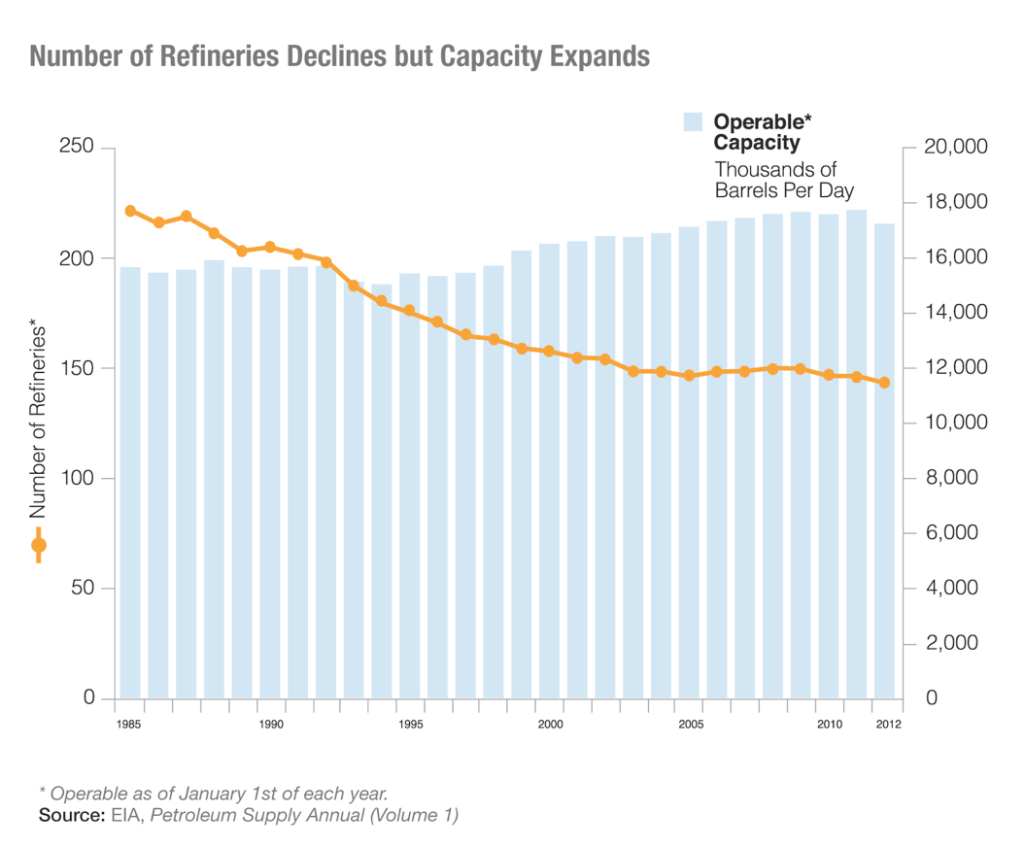 This unprecedented expansion, driven by unrelenting global demand for heating fuel and gasoline, is pushing US refineries to their limits.  For these old facilities, the stress is proving to be too much.

In July 2013, US refiners shipped a record 3.8 million barrels of products a day to places as far flung as Africa and the Middle East, according to data from the Energy Information Administration.  That volume is nearly 65% above the 2010 export level, when the shale boom was still in its infancy. 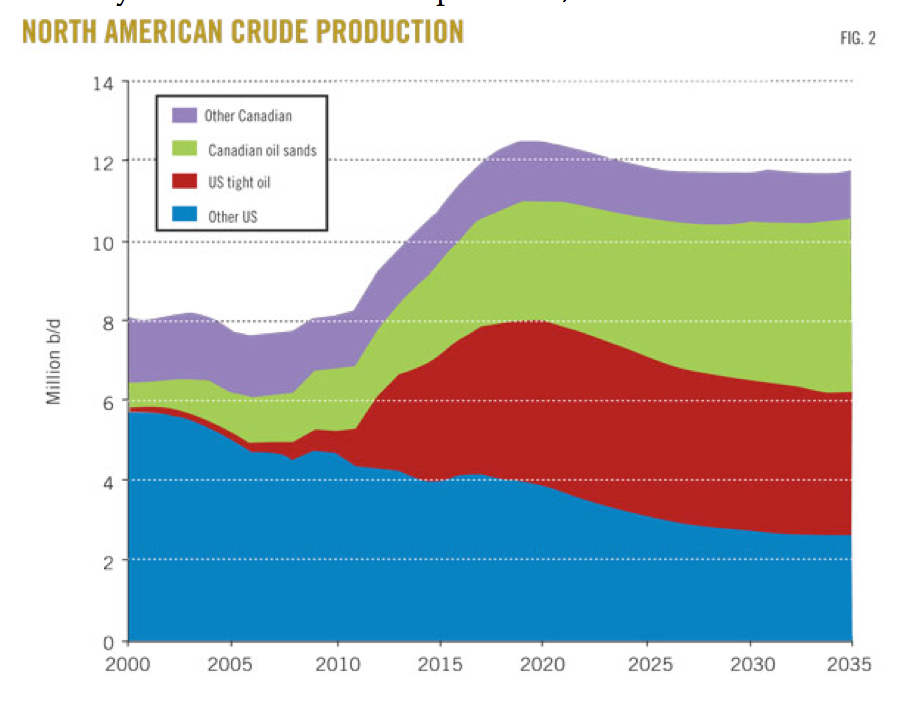 As a result of this soaring capacity, the declining numbers of US refineries are running flat-out at full stride, overtaxing their aging facilities.  A decade ago, they operated at a comfortable 70% capacity; today, the rate exceeds often 90%.  According to experts, they weren’t really designed to run at that level.  And that may be increasing the possibility of recurring equipment failures, fires, explosions, and chemical releases.

Since the beginning of 2009, for example, at least 80 fires have broken out at 59 refineries.  Over the past decade, more than 7,600 accidental chemical releases from refineries have been reported to the US Coast Guard’s National Response Center; about half were blamed on equipment failure.  While a 2012 catastrophic pipe failure at the Chevron refinery in Richmond, California, didn’t result in loss of life, a flammable fluid that partially vaporized into a large cloud engulfed 19 employees.  About 15,000 people in the community sought medical attention when the plume spread beyond the refinery confines.  The pipe that failed was 36 years old.

Unfortunately, fatalities have resulted from other age-related refinery incidents.  The April 2010 inferno that killed seven at the Anacortes, Washington, Tesoro refinery was blamed on a ruptured weld in a 38-year-old heat exchanger.  According to the Washington State Department of Labor and Industries, the exchanger had been inspected using a sophisticated method to detect cracks only once, in 1998.  (Sadly, that incident was only one of the many explosions that occurred in the three months between March and May 2010 – accidents at refineries, coal mines, a natural-gas-fired power plant construction site, and on an oil drilling rig that took the lives of 58 workers.)  Pre-dating all of these tragedies was the 2005 blast at BP’s Texas City refinery, which killed 15 and injured at least 100 more.  The plant began operating as an oil refinery, albeit under another owner, in 1934.

Beyond old age and iffy maintenance, another factor has the potential to increase risk at aging refineries: the change in the grade – or type – of crude they’re being used to process.

Refineries are complex creatures, engineered and configured to process specific products.  With changing markets influencing both the resources coming in and the refined products going out, some refineries are operating beyond their design limits.  In order to maximize the output of all valuable refined products, refiners increasingly blend the plentiful light sweet crude from US shale fields with heavier imported crude.  And while this might be good from a financial standpoint, it doesn’t ease the burden on the refining equipment.  The wrong diet of crude oil feedstock – one that disagrees with the way the refinery has been configured – can result in operating and production difficulties, some that may have catastrophic outcomes.

One particular problem occurs when heavy crudes that contain larger amounts of sulfur – which is associated with corrosion in refinery pipes – are processed in facilities not configured for them.  Although Chevron hasn’t indicated which type of crude it was processing when the Richmond refinery exploded, independent researchers and regulatory agencies have cited increased sulfur in Chevron’s crude as a key factor that caused corrosion of aging pipes.  Between 1997 and 2012, the amount of sulfur in the oil Chevron processed increased from roughly 1% to 1.5%.  Sulfur is known to corrode certain metals, and as a result some oil pipes deteriorated four times faster than in previous years.  According to Greg Karras, Senior Scientist with Communities for a Better Environment, “It was one on a growing list of very tragic explosions and fires that happened when sulfur corrosion was allowed to rot out the pipes and vessels in refineries.”

Read My Lips: No New Refineries

The Energy Information Agency (EIA) estimates that the gap between refinery capacity and consumption – the same issue that is overtaxing today’s refineries – is expected only to widen over time.  In fact, the EIA projects that by 2020, consumption will increase 19.2% while at the same time capacity will grow just 9.4%.  This means that refining capacity will be only 100,000 barrels a day more in 2020 that it was in 1981.

With aging refineries subject to rapid, potentially devastating corrosion and other equipment failures, it would seem that building new refineries would be the logical, practical solution to bridge the gap.

But not so fast…  Building new refineries is a time-consuming, vastly expensive undertaking.  With today’s regulations, oil company execs say, it would cost $100 million and two to four years of engineering, regulatory review, and approval just to get started – before any concrete’s been poured or pipe’s been laid.  As a result, it could take a decade or more for a new, high-capacity refinery to come online.

Phoenix-based Arizona Clean Fuels Yuma was hoping to buck that onerous trend and build what would be the first new refinery in the US since 1976 (not including the smaller Bakken area facilities).  Initial plans called for the refining of 150,000 barrels per day of crude oil and about 1.8 million gallons per day of other petroleum-based materials, with output including gasoline, jet fuel, propane, and diesel fuel.  The project price tag? $4 billion.

Glenn McGinnis, Arizona Clean Fuels Yuma CEO, is recognized as a global industry expert in areas of refinery design, development, and operations.  But even his level of experience likely didn’t prepare him for the delays that would plague this project.  The first steps – permit applications to build near Mobile, Arizona – began 16 years ago, in 1998.  Five years later, as the company believed it was wrapping up its permit application, the state belatedly determined that Mobile was part of the area around Phoenix out of compliance with standards for the smog-forming pollutant ozone, which meant that the facility would have to be built in Yuma instead.  The final permit was issued in April 2005 – seven years after the company started the permitting process.

So, what’s happened to Arizona Clean Fuels Yuma since then? Apparently, not much.  The company website, which hasn’t been updated since 2009, says the “Next major milestone, expected within the next few months, will be the announcement of the EPC (engineering, procurement, and construction) contractor.” 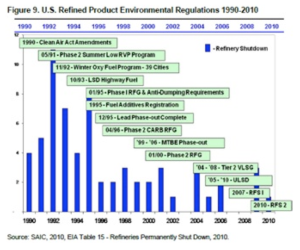 The clean air regulations that stymied Arizona Clean Fuels Yuma are nothing new: The strict environmental regulations of the federal Clean Air Act amendment of 1990 have contributed to the shutdown of US refineries, whose numbers are now half what they were in the 1980s.

Clean Air Act amendments in 1990 and 1997 required refineries to limit emissions of air pollutants and to make cleaner reformulated fuel.  In order to comply, refiners who were modifying existing plants were forced to install expensive pollution-control technology – a pricy proposition.  Reports suggest that, throughout the 1990s, nearly 25% of the capital investment in refineries was to comply with environmental regulations, an amount totaling more than $100 billion across the industry.

But clean air requirements haven’t been the only roadblocks when it comes to the construction of new refineries or the modernization of existing facilities.

Mandates for gasoline blends have forced many refineries to close and have made building new oil refineries extremely difficult.  For example, in order to fulfill various air pollution reduction plans, gasoline sold in the US has been fractionated into about 17 “boutique fuels.”  With three grades of gasoline per fuel, refiners are producing more than 50 separate blends.  Not only does producing these blends require the installation of expensive equipment, different blends must be transported separately, which also limits pipeline and storage capacity.

Alternative fuel legislation, particularly surrounding ethanol use, is also hamstringing plans.  The 2005 energy bill mandated the annual use of eight billion gallons of ethanol in gasoline blends; subsequently, the Energy Independence and Security Act of 2007 mandated that gasoline contain 10% ethanol.  Petroleum refiners responded by canceling 40% of planned expansions in capacity.  Late in 2013, the Environmental Protection Agency (EPA) actually proposed reducing the amount of ethanol that is required to be mixed with the gasoline supply.  This is the first time the EPA has taken steps to slow the drive to replace fossil fuels with renewable forms of energy.  (It’s interesting to note that the timetable for enacting the 2007 energy act has turned out to be largely impractical, forcing year-by-year adjustments. The fact that oil imports have declined sharply and domestic production has risen since the laws were enacted seems to be causing much of the upheaval.)

Although the development of new refineries is mired in bureaucratic red tape, some companies have moved forward with facility upgrades.  The list includes BP, which spent $4 billion to revamp its Whiting, Indiana, facility to be able to take advantage of the increased volume of bitumen coming from Canada.  And the Richmond, California, Chevron refinery – yes, the same one where the fire broke out in 2012 – is set to modernize, too, in order to better process crude oil blends and gas oils with higher sulfur content.

But only time will tell if these upgrades are enough to prevent the kinds of refinery catastrophes that occurred in the past and close the capacity/demand gap, or if they’re more like Botox: not an antidote to aging, just a quick – and possibly only temporary – way to fix the sagging.