The Shale Revolution: The Shot Heard ‘Round the World?

There’s no doubt that American energy is experiencing a shale revolution.

But is shale “the shot heard ‘round the world,” with global repercussions and international promise?

Do other countries have the same shale development potential that the US is experiencing?  And even if they have the resources, do they have the technology to exploit the reserves, the infrastructure to transport and produce shale oil or natural gas, and the ability to export it?

The answers are mixed. 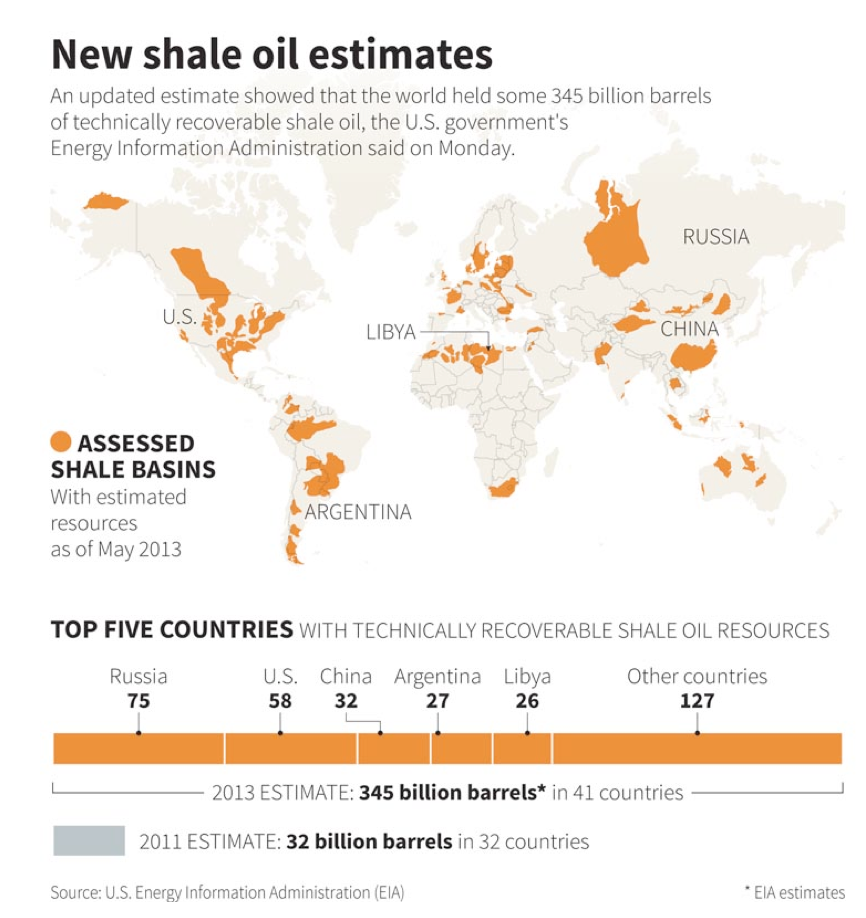 From a purely empirical standpoint – looking at reserves alone – Russia and China have the best odds of emulating the US success in recovering oil and natural gas resources from shale.  Russia has more technically recoverable shale oil resources than we do – 75 billion barrels versus our 58 billion barrels, according to the Energy Information Administration – and China outranks us in terms of natural gas export potential.

The problem for Russia is that, while the country has abundant shale oil resources, these are not as easily recoverable as those in China and the US.  Russia ranks ninth in this regard, behind Australia, which doesn’t even rank in the top 10 countries with recoverable shale oil in the first place.  But some foreign oil companies, including France’s Total and Norway’s Statoil, have said they are ready to bring their expertise, technology, and innovative solutions to help Russia develop its unconventional resources.

During the Global Energy Intelligence Day conference held in Moscow in October, Total confirmed that it had been talking to both Rosneft (the leader of Russia’s petroleum industry and the world’s largest publicly traded petroleum company) and top independent Lukoil about possible partnerships.  At the same conference, Statoil predicted that Russia’s vast offshore reserves would be a major focus for companies in the future.

But it will take more than borrowed technology for Russia to build and sustain shale oil output.

According to Global Energy Intelligence speakers, Russia will also need to improve its political stability and put the appropriate, clear, and reliable legal and tax systems in place.  As Jonathan Kollek, president of international commodities trader Trafigura Eurasia, explained, Moscow needs to provide equal opportunities for all market players and leave “business to businessmen and politics to politicians.” (source)

In China, Government Rallies to the Cause – But Strongly Enough?

Both market and geostrategic forces are at work in China’s quest to develop its shale gas deposits.

First, the country is developing a nearly unquenchable thirst for energy.  The International Energy Agency (IEA) estimates that energy demand in China is expected to grow 60% by 2035.

In particular, China wants to develop shale gas for transportation, and here’s why.  Currently, most oil imported into China arrives by tankers that have to move through the US Navy-controlled Pacific.  Large-scale use of natural gas for transportation would protect China should the US ever blockade the shipping lanes.

The Chinese government has pledged to spur the shale industry’s development and meet rising gas demand by prioritizing land approvals, allowing tax-free imports of equipment, and offering subsidies to explorers.  State-owned Sinopec, Asia’s biggest oil refiner, has announced that it plans to produce 3.2 billion cubic meters from the key shale area of Fuling in 2015, doubling its previous target.

But despite China’s abundance of shale reserves under foot, the country has a bounty of “above-ground” obstacles blocking its path toward its own shale revolution – from insufficient market structures to ill-situated trading hubs to poor regulation of production.

Argentinean Oil Gets a Hand from a US Powerhouse – But Is the Partnership Enough? 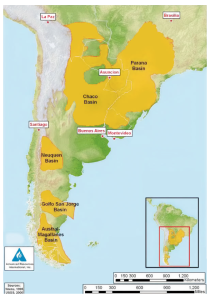 Currently the largest conventional producer of natural gas in South America, Argentina closely follows both China and the US in terms of shale gas reserves and is one of the top five countries with technically recoverable shale oil resources.

Not only has Argentina expressed interest in using fracking to exploit its supply of natural gas, it has partnered with US energy giant Chevron to exploit local shale oil plays.  In July 2013, Argentina’s state-owned energy company YPF announced it had inked a US$1.5 billion deal with Chevron to drill more than 100 nonconventional wells in 2013 and 2014 in the vast Vaca Muerta shale field.  Vaca Muerta is believed to be one of the largest shale basins outside of North America, with estimated resource reserves of 22.5 billion barrels.

But the deal with US’s Chevron is just, pardon the pun, scratching the surface.  The list of suitors seeking to exploit the unconventional reserves at Vaca Muerta reads like a “Who’s Who” of the world’s major oil and gas companies: Royal Dutch Shell, Malaysia’s Petronas, German firm Wintershall, Chinese-Argentinian company Bridas, France’s Total, and Petroleo Brasiliero SA.  The word on the street is that YPF has also approached Russia’s Gazprom and Mexico’s Pemex.

Successful fracking is actually underway at Vaca Muerta – but not a drop of oil has been produced yet.  The reasons for that are very complex and political, including controversies over land leases, administrative corruption at multiple levels, and even some dramatic Tom Clancy-esque murder and suicide.  Needless to say, favorable geology alone can’t produce another shale revolution akin to the US.

Ernesto Lopez Anadon, chairman of the Argentine Oil and Gas Institute, says only Argentina’s ineptitude is holding it back from becoming the world’s fourth-largest shale oil producer. “Argentina is sitting on a potential energy bonanza,” Lopez says. “If it could just get its act together and not squander it.” (source)

Just like Russia and China, Argentina faces numerous “above-ground” obstacles to successful shale proliferation that, at this point, may seem insurmountable.

Europe’s largest deposits of shale gas are probably in Poland.  With an estimated 768 billion cubic meters of natural gas, Polish shale fields could hold enough to supply its domestic energy needs for 65 years.  In its zeal to gain energy independence from Russia, Poland has issued 111 exploration licenses to more than 20 firms.

And the recent success of a test has raised some eyebrows.  In January, Dublin’s San Leon Energy Plc – which has the financial backing of Hungarian-born billionaire George Soros – drew as much as 60,000 cubic feet per day in a shale formation in the Baltic Basin in northern Poland.

Poland has tried to build its shale gas industry through foreign investment.  Unfortunately, a woeful lack of infrastructure has scared off most companies, and investors that signed on early have since reconsidered.  Exxon Mobil was willing to take on the challenge, for example, but it gave up searching for shale gas in Poland in June 2013 after failing to find viable qualities with its two exploratory wells. (source) And Italian energy company Eni recently allowed two of its three shale gas exploration licenses in Poland to expire and is likely to allow the third to lapse, giving up on its shale gas dream in Poland. 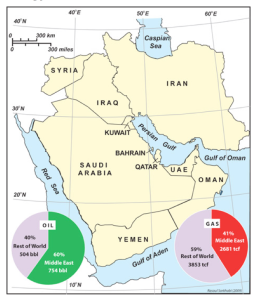 In terms of oil reserves, no region of the world can quite compare to the Middle East.

And then there’s Israel.

Israelis often joke that Moses led them to the only land in the region where there are no petroleum resources.  But with the discovery of oil shale, also known as kerogen, near Jerusalem in 2009, Moses is finally getting a break.

In fact, with one estimate putting Israel’s total oil shale reserves at more than 250 billion barrels – compared to Saudi Arabia’s total oil reserves of 260 billion – the small Jewish state is poised to become the Middle East’s new energy giant. To add some perspective, if the oil is actually brought to market, Israel would become the third largest energy producer in the world, behind only Saudi Arabia and Venezuela.

Not only are Israel’s oil shale reserves plentiful, they’re high quality, very light, and easy to refine – all of which increases their value. (source)

Fracking is required to wrest oil shale from its rocky deposits, and Israeli fracking production is still tiny and more expensive than, say, drilling in Saudi Arabia or Kuwait.  But as fracking technology continues to advance, and Israel opens up both its oil shale oil and some 16 trillion cubic feet of offshore natural-gas deposits, not only could the country achieve energy independence, it might become a major oil and gas exporter.

That changing role will undoubtedly affect Israel’s relationships with Western Europe, which could use more energy resources.  The offshore reserves have already more than piqued the attention of Russia’s Vladimir Putin:  He encouraged a partnership between Israel and Russian energy giant Gazprom to open up those fields.

And what about Israel’s other Middle East neighbors, the ones like Egypt, Syria, Lebanon and Jordan that are relatively oil-poor compared to Arabs in the Gulf?  By meeting their energy needs, Israel could gain military security as well as regional clout – which would be revolutionary in its own right.

But even though Israel has world-class shale oil resources, it’s way too early in the game to tell what the long-term outlook is for Israeli shale.  For one thing, the government has raised taxes since discoveries were made, shifting the financial opportunity.  Leases are hard to come by.  And, most significant of all, the world’s major oil and gas companies – those most experienced in teasing oil from shale – aren’t interested in Israeli shale for geopolitical reasons.  After all, it’s not easy to operate in the Arab world and Israel at the same time. (source)

Whether they need or have the support of a US company with shale development experience, most countries are hamstringed by a lack of infrastructure that in no way comes close to the elaborate network of pipelines that exist in the United States, noted Keith Crane, senior economist and environmental policy analyst at Rand Corp.  Even when encouraging quantities of shale gas or oil are located in other countries, he said, they face considerable infrastructure build-up costs to exploit it.

That’s the case in Indonesia, where Chevron is also lending its fracking expertise.  Chevron Pacific Indonesia already uses fracking in Duri, Sumatra — the country’s largest oil field – but poor local governance, a lack of financial incentives for investors, and inadequate infrastructure may prohibit Indonesia in general from reaching its full potential as a producer of shale gas reserves.

Similarly, much of Saudi Arabia’s shale resources lay in remote, dry areas where no existing extraction or transport facilities exist.

Throughout Europe, too, geology and insufficient infrastructure have conspired to constrict potential shale production.  Because Europe’s shale deposits are deeper underground than America’s, they’re more difficult – and more expensive – to extract.  And even if they could be reached, Europe has nothing even remotely close to the web-like empire of pipelines that the US uses to bring product to market.

So it’s always possible – in some places even likely – that shale formations around the world may yield a bounty. But at this stage in the game, it seems improbable that any of those foreign plays will ever replicate the magnitude of the US shale revolution – perhaps more the case of a “long shot ‘round the world.”

Keith Crane is director of the RAND Environment, Energy, and Economic Development Program and a professor at the Pardee RAND Graduate School. In fall 2003, he served as an economic policy advisor to the Coalition Provisional Authority in Baghdad. He also has served as chief operating officer and director of research at PlanEcon, Inc., a Washington, DC-based research and consulting firm focusing on central and eastern Europe and the former Soviet republics.
Link