The Pursuit of US Energy Independence: A History of Wishful Thinking?

by Dan Eberhart
Energy Independence and Security Act of 2007, energy policies United States, US energy independence, US federal energy policy
Comments are off

Ever since those days of rationing and long lines at the gas pump that hallmarked our nation’s energy crisis following the 1973 OPEC oil embargo, our country’s leaders have been on a quest toward energy independence.

Presidents since then have promised that the US would wean itself off reliance on foreign oil and gas.  Indeed, “energy independence” has been a long-range presidential promise for more than 40 years.

The US response to the embargo comprised three components that today remain the basis for energy policy.  First, the government promoted lower oil consumption.  Second, more oil was domestically drilled.  Third – and perhaps the most important from a foreign-policy standpoint – the US promoted a unified global oil market in which any country that had the practical means could purchase oil from any other.

An analysis of how those presidents attempted to achieve that goal shows a variety of approaches.  Some measured levels of success and others… well, not so much.  From establishing the Strategic Petroleum Reserve (SPR) as the world’s largest emergency oil reserve in 1975 to creating a Synthetic Fuels Corp to help private companies produce energy from synthetic fuels in 1980 to maintaining a ban on exporting domestically produced oil for decades, each administration has had its own plan on how best to become energy independent.

What to Make of Presidential Promises?

Of course, we’re talking about the promise of “independence” in terms of producing as much oil as we consume.  It’s too simplistic – and unrealistic – to argue that oil would never again enter or leave the country.  The worldwide energy market is too interconnected for us (or any major oil player) to claim that producing our own excess energy will mean we’ll never need to buy from or sell to anyone else.  But what we are, indeed, facing is energy self-sufficiency that strengthens our domestic affairs without cutting ourselves off from the rest of the global marketplace.

Presidential energy policies paving the way toward independence began well before the 1973 energy crisis.  For instance, President Franklin Roosevelt in 1942 initiated the build-out of hydro-dams, such as the Grand Coulee.  President Eisenhower got into the act by launching the age of commercial nuclear energy with his “Atoms for Peace” speech to the United Nations in 1953.  Interestingly, one of Eisenhower’s signature pieces of legislation – 1956 National Interstate Highway Act – helped spur the rise in oil consumption the following decades.

But it wasn’t until the Nixon Administration that presidential energy policy development – aimed at this elusive “independence” – got into full swing.  During a November 1973 speech, Nixon described the overall objective of his energy policy: “In the last third of this century, our independence will depend on maintaining and achieving self-sufficiency in energy.”  That same speech launched Project Independence 1980, a series of initiatives to insure that, by the end of the decade, “Americans will not have to rely on any source of energy beyond our own.”

“The United States will not be dependent on any other country for the energy we need to provide for jobs, to heat our homes, and to keep our transportation moving,” Nixon said. Among the steps to achieve this goal, he authorized the $10 billion Alaskan pipeline. 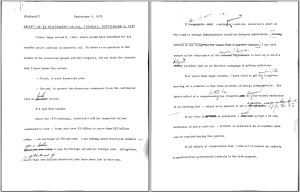 One of Canary’s prized possessions is the actual September 1975 speech with President Ford’s handwritten changes.

President Nixon may have pegged the year for “independence day” as 1980, but President Ford pushed it back to 1985.  Ford urged lawmakers to launch a program designed to increase energy supply, cut demand greatly, and to put in place emergency programs.  Shortly after came the establishment of the Strategic Petroleum Reserve with the capacity to hold 727 million barrels of emergency oil.  Ford said that increasing supply of oil – the bulk of that to come from drilling in Alaska and the Outer Continental Shelf – would be needed for the country to become less reliant on foreign oil. “These proposals and actions, cumulatively, can reduce our independence on foreign oil.”

But Ford also appealed to citizens to do more, specifically cutting long-term consumption.  “I call upon all Americans to join in these efforts to conserve energy,” Ford said during a September 1975 televised speech in which he explained his rationale for working to end price controls on domestic oil.

President Carter had his own ideas for achieving energy independence, many of which he shared in fireside chats while wearing a sweater, as if to reinforce his points.  During his 1977 State of the Union Address, he told the nation, “Together in a spirit of individual sacrifice for the common good, we must simply do our best.”  Carter called for decontrolling the price for natural gas through the Natural Gas Policy Act, which pushed natural gas production to a then-all-time high.  During his presidency, solar energy funding quadrupled, “gasohol” dramatically increased, and the Synthetic Fuels Corp. was created to help private companies produce energy from synthetic fuels.

Approaching a decade after the oil embargo, President Reagan took office in 1981.  In addition to pledging massive budget cuts, department closures, and reduction in Federal regulations, he also vowed to “continue support of research leading to development of new technologies and more independence from foreign oil.”  The following year, Reagan told Congress  that “we’ve come closer to achieving energy independence and helped bring down the cost of gasoline and heating fuel.”  But he failed to accomplish all that he set out to do – including efforts to dismantle the Department of Energy.

President George H.W. Bush, a former oilman, created a mishmash of proposals under an umbrella of a national energy strategy similar to those of presidents before him.  The goal pretty much remained the same: “reducing our dependence on foreign oil.”

President Clinton then took the helm, focusing more on decreasing consumption.  Clinton declared that he wanted to wean the nation from its reliance on coal and oil, and to pursue less costly alternatives such as natural gas.  His longer-term goals were revitalizing industry and making it more energy-efficient.

By the time President George W. Bush took office, the freedom-from-foreign oil missive had been pushed into a new century.  He warned, “We can do a better job in conservation, but we darn sure have to do a better job of finding more supply.”  His 2003 State of the Union Address proclaimed that one of his administration’s goals was to “promote energy independence for our country.”  In 2005, Bush signed the Energy Policy Act, the first major energy security legislation in more than a decade.  Two years later, he signed the Energy Independence and Security Act of 2007, which he claimed would help reduce dependence on oil by increasing supply of alternative fuel sources.

President Obama, too, pledged to transform this country from dependence to independence on foreign oil.  He told the country in 2012 that the nation needed an “all-out, all-of-the-above strategy that develops every available source of American energy.”

US production of both crude and natural gas continue to climb

Road to Independence: Perhaps More of a Slow Realization than a Failed Promise?

Even with all the political rhetoric and legislation to direct our country toward energy independence, for many years it seemed as if we might actually be moving further away from this goal.  In fact, between 1990 and 2007, total US energy production showed virtually no growth at all, while consumption and imports rose.

The country appeared to take a backward slide when oil consumption increased and imports rose to fill the gap when domestic production wasn’t enough.  Over the years, Federal regulations have often contributed to the difficulty in reaching that never-ending goal to achieve energy independence.  Take the ongoing issue of allowing the drilling of new wells offshore, for example:  In 1990, President George H.W. Bush issued an executive order banning offshore drilling; President George W. Bush rescinded that order in 2008.  Just as controversial (if not even more so) are the nationwide “fractivist” debates:  Last year, the US Bureau of Land Management (BLM) proposed creating an additional layer of Federal bureaucracy to hydraulic fracturing regulation.

But in recent years, there seems to have been a turning of the tide that reversed much of the downward spiral.  Since the mid- to late-2000s, consumption has decreased, which was a component of nearly all the policies spelled out the last 40 years; domestic production and exports have risen; and imports have decreased.

The EIA illustrates our backward slide and recent resurgence

This reversal of fortune could very well be our push to energy independence.  Even the International Energy Agency (IEA) reports that the US increase in crude oil exploration in 2013 exceeded even the most “bullish of expectations,” and its crude oil supply in that year “registered the fastest absolute annual supply growth of any country in the last two decades, rising 15%.”  Now that the “potential US growth in 2014 seems a given,” many experts (in addition to the IEA) now forecast the country becoming energy independent by as early as 2020.