Light, Tight, and in for the Fight: Booming US Shale Creates a Clash of the Titans 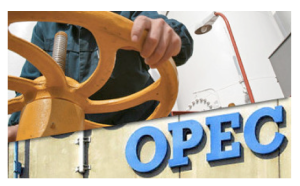 Just when you thought that North American energy independence was a pipe dream, or that oil, money, and power were the natural inheritance of certain foreign oil-rich producers, US shale oil arrived four years ago to transform the global energy picture – and possibly the mathematics of geopolitical power.

What was once a David-and-Goliath fight is destined to become a clash of many Titans.

A classic confrontation between David (in this case, US shale) and Goliath (here, the OPEC “Petrostates”) has turned into a much more subtle calculus of dampened OPEC ambitions, downward pressure on global oil pricing, and amazement that US hydraulic fracturing (“fracking”) could have changed the balance of accessible energy resources so rapidly.

“Ten years ago, shale [energy] wasn’t even on the radar,” said Michael Wittner, Managing Director, Global Head of Oil Market Research and Head of US Commodities Research, Societé General (New York) during a recent phone conversation.  “But [because of shale] in the next five years, there will be some downward pricing pressure on light sweet crude oil, and the first way OPEC will deal with that is to cut production [and] investment in capacity.  Instead of 10 million barrels of oil a day at $100 a barrel, for example, they may need to produce 8 million barrels per day,” a quantity that will deliver around $80 billion in annual revenues.  OPEC, in other words, will not suffer a knock-out blow in the short to medium term.

But the real question, Wittner says, is whether producible shale reserves are discovered and exploited in countries throughout the world – China, Russia, Argentina, and India, for example – not just the US.  If that happens, global supplies of oil will increase, even with higher consumption, while prices for Brent and other crude grades may decline. (Brent Crude is a major trading classification of sweet light crude that serves as a major benchmark price for purchases of oil worldwide)

This transformation may or may not be good news for consumers at the pump, as prices for gasoline have remained stubbornly high despite increases in US oil supplies and capacity.  (Keep in mind that prices for retail gasoline are affected by global markets, not just by what’s happening stateside.)  But it is definitely good news for the oil refinery business, the US economy in general, and for anyone interested in seeing OPEC’s political and economic clout diminished worldwide.  In the case of ubiquitous international shale development, OPEC will almost certainly become a less important player than before.

Timetables for new technologies are always uncertain.  “If you look at long-term publicly available forecasts for shale oil, organizations like EIA and Exxon Mobil say that shale supplies will begin topping out of capacity between 2020 and 2030,” Wittner said.  The Paris-based International Energy Agency (IEA) claimed in a recent report that shale oil and gas will not affect OPEC’s dominance over world oil supplies in the long term (as measured in decades).   But in the short and medium term, even OPEC itself concedes that the meteoric proliferation of US shale resources has significantly impacted the global oil market – and the cartel’s dominant position within it.

Technological advancements are another uncertainty.  “Shale represents the classic battle between technology and geology,” Wittner explained.  With new technologies and reserves yet to be discovered, no one can predict with certainty whether shale will be “tapped out” in twenty years.  “That’s a very uncertain question,” he said.

What isn’t uncertain is the current impact the shale revolution is having on global markets.

A May 2013 IEA report noted that the North American oil production boom — led by US light, tight oil as well as Canadian oil sands — had produced a “global supply shock” reshaping the way oil is refined, transported, stored, and marketed.

While developing economies will drive future demand, “the technologies responsible for the boom will increase production from mature, conventional fields – causing companies to reconsider investments in higher-risk areas.”  In other words, the shale boom will evolve as extraction techniques become more sophisticated, with North American supply forecasted to grow by 3.9 million barrels per day from 2012 to 2018, constituting two-thirds of non-OPEC oil production. 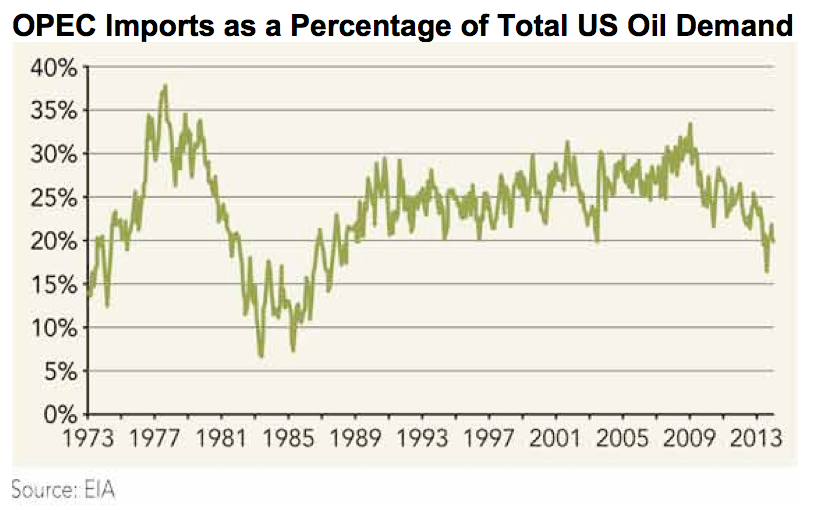 Meanwhile, the US has been moving rapidly toward energy self-sufficiency, tapping shale and other unconventional energy resources while reducing OPEC oil imports – over the last three years, in fact, these imports have fallen by more than 20%.  By 2015, the United States is projected to bypass Russia and Saudi Arabia as the world’s top oil producer, most of its new reserves coming from horizontal shale drilling and hydraulic fracturing.  And by 2020, the US will likely produce more than 11.6 million barrels per day.

The prospects for OPEC are complex – if not down-right gloomy – in the medium-term.  Impacted by the US shale boom, the cartel is seeing falling demand and generally stagnating global prices for crude oil.  Member nations Saudi Arabia, Qatar, and the United Arab Emirates (UAE) may be forced to cut production by 1-2 million barrels a day to avoid a glut in the second half of 2014, although OPEC at present is forecasting a slight increase in production this year, much of it to satisfy demand from Asia (Wittner, personal communication, 25 February 2014).  Meanwhile, West African OPEC members, notably Nigeria and Angola, have seen drastic declines in US imports of their light sweet crude – as much as 50%, displaced by North American shale oil since 2010.  As long as Asian markets continue to be relatively stable, however, West Africa will likely offset its North American losses by selling to the East.

Tensions within OPEC – especially between Middle East and African members (the latter suffering the worst export declines) – continue to disrupt the cartel’s display of unity.  Saudi Arabia, the kingpin of OPEC oil and its largest producer, soon will find increasing competition from member states Iraq, Iran, and Libya.  All three countries claim they will increase oil production following years of disruption from war and international sanctions (Smith, November 12, 2013).  OPEC not only expects demand for its oil to drop to a five-year low of 29.6 million barrels per day by the close of 2014, but also to see some downward pricing pressure in crude prices ($105.09 per barrel in 2013, a drop of $7 over 2012 prices).  US net petroleum imports from OPEC have declined by 37% from the January 2008 record of 6.371 million barrels a day, and further cuts are seen by the end 2014.

Slowing Western demand means OPEC must compensate by expanding into new markets – most likely Asia, especially China and India in the near-term.  Further, US energy self-sufficiency, coupled with its increased trade with Canada and Brazil, is making it less susceptible to OPEC’s time-honored traditions of price gouging, oil embargos, and other politically inspired activities.  The cartel famously staged an oil boycott after the Yom Kippur War of 1973, and in recent years OPEC members have been implicated in bankrolling terrorist activities.  But the current reversal in oil fortunes, particularly the US challenge to OPEC’s supply primacy, may dampen enthusiasm for supporting radical causes.

“OPEC power has been well and truly fracked,” claimed Peter C. Glover and Michael J. Economides.  “And it’s not just the US and Israeli shale gas and oil revolutions which threatens OPEC’s decline.  OPEC is already grappling with a whole bunch of serious energy problems that are colluding to hasten its demise.”

Among OPEC’s challenges is the soaring demand for domestic oil consumption in Saudi Arabia and increasing competition from Iran, OPEC’s second largest oil supplier.  Iran has traded nuclear ambitions for plans to boost oil production by 500,000 to 750,000 barrels a day in 2014, almost certainly tripling daily output to 9 million barrels by the end of the decade, according to Iranian officials.  Even Libya promises to restore as much as a 1 million barrels a day to as the holder of Africa’s biggest reserves, although the timing for such a move remains unpredictable given the disruptions to Libyan oil field infrastructure.

Meanwhile, the US is clearly undergoing an energy revolution.  Just consider this: A record surge in US oil production for the first ten months in 2012 met 84% of the country’s energy needs. As this trend continues, the US shale recovery boom will impact OPEC’s prospects and spheres of influence in the medium term, at least.  If shale extraction becomes a ubiquitous practice worldwide, oil markets will adjust accordingly to become more diversified.   And while OPEC may not be left in the dust, the titans of this cartel will almost surely lose the hegemonic title of “oil kings” that they once had.