by Jacob Eberhart
Comments are off

“The Bakken boom has relied on team work and innovation to tap into the vast oil and gas resources, allowing America to take control of our energy future,” said Dan K. Eberhart, Canary CEO. “We are excited by the opportunity the new facility presents and appreciate the support from this wonderful community.”

This state-of-the-art 45,000-square-foot building located one mile from the several Watford City oil rigs & is the largest purpose-built wellhead facility in the region. The more than 60 dedicated and skilled employees at this site will provide around-the-clock drilling and production services, including efficiently repairing, refurbishing and delivering wellheads to minimize customers’ downtime and maximize their productivity. From this location, Canary will also offer hot oil, slickline, wireline, hydro-testing, pressure testing and frac heating services.

“We truly thank the people of Watford City for welcoming us into their community, especially the men and women who will be working out of this facility in the years to come,” said Don Pfister, Canary’s Chief Operating Officer. “Without our employees’ support and the support of their families, we wouldn’t be able to provide our customers with high-quality wellheads or accomplish our goal of helping oil and gas companies nationwide in unleashing America’s energy.”

Performance artist David Garibaldi painted a series of art pieces, including the Statue of Liberty, Superman, “The Sprinter” and a Canary, LLC painting, all in 30 minutes during the grand opening. Garibaldi was invited to the Rock and Roll Hall of Fame and Museum in Cleveland, Ohio, where he painted a portrait of Mick Jagger. In September 2008, he was the opening act for Blue Man Group’s tour in Canada and the United States.

Also at the event, the Watford City Chamber of Commerce held a ribbon cutting ceremony, Watford City Mayor Brent Sanford made a few remarks in support of the facility opening and an invocation was given by The Preacher in the Patch’s Ron Evitt, a North Dakota native and evangelical broadcaster.

Based in Denver, CO, Canary, LLC, formerly Frontier Energy Group, LLC, provides comprehensive oilfield drilling and production services to oil and gas companies throughout the United States. Canary is the nation’s largest independent wellhead services company. With 27 locations, Canary operates in every major shale oil and gas region in the United States, including North Dakota’s Bakken, Colorado’s Niobrara, Oklahoma’s Woodford and Ohio’s Utica. Canary LLC offers turnkey services to its customers for all of their drilling and production needs. 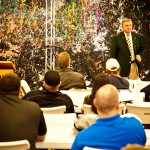 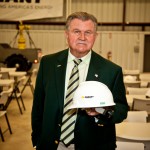 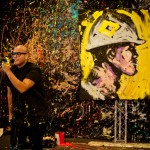 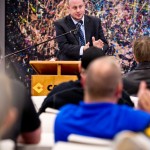