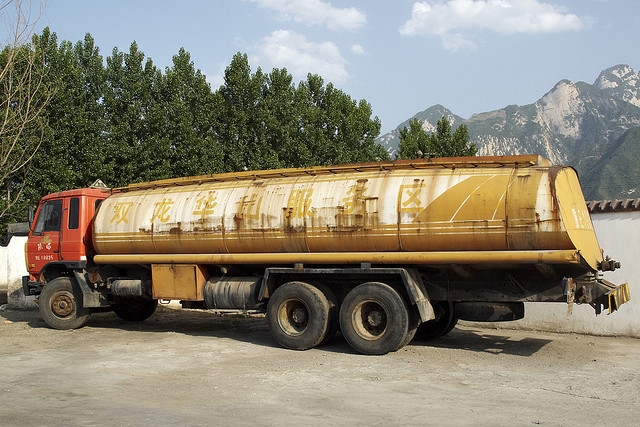 An oil tanker parked in front of Mount Hua.

Of all the face-offs in history, among the best known would have to be the one captured in the iconic 1989 photo of Tank Man, the solitary Chinese pro-democracy protestor blocking military tanks in Beijing’s Tiananmen Square.  Now, with China emerging as one of the world’s largest energy consumers and importers, the country might be in for more showdowns.  Only these will be on a geopolitical rather than human scale.

The problem is, China’s home-grown resources aren’t able to keep up with escalating energy demand. China became the largest global energy consumer in 2012 and passed the US in December 2012 to become the world’s leading importer of oil.  According to predictions by the International Energy Agency, China’s net oil consumption will reach somewhere around 13 million barrels a day by 2035, and nearly 80% of that total will be imported oil. 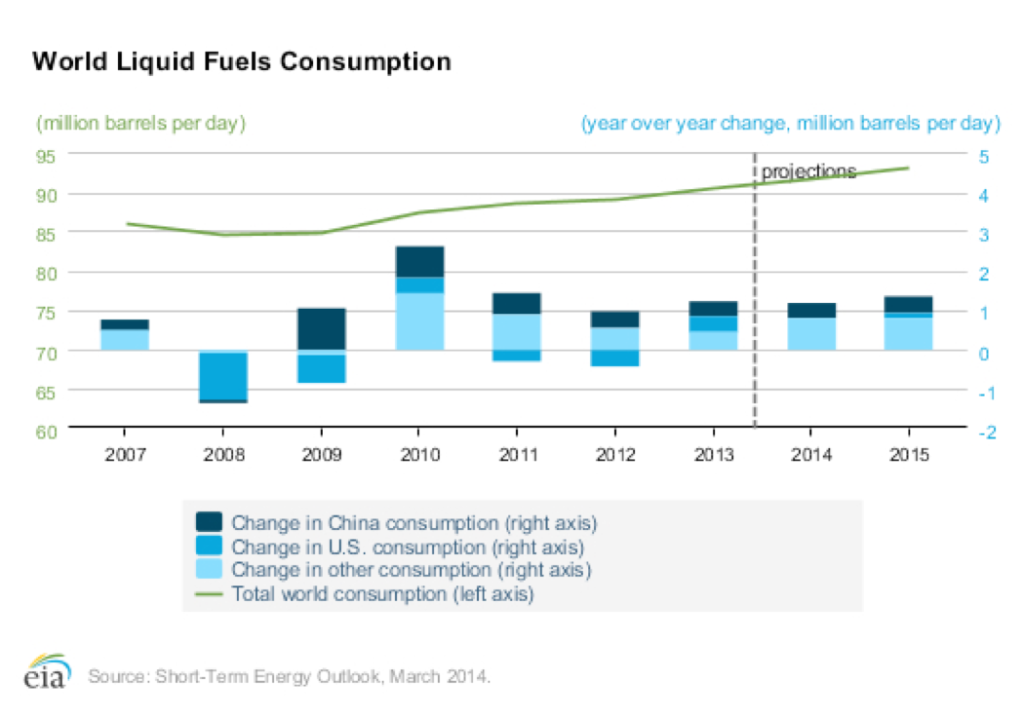 China on the Move

So what’s fueling the demand? A society on the move, thanks to a growing economy.

Although there’s debate about when it will happen, China’s GDP is expected to surpass ours, possibly as early as 2018 (although per capita GDP is likely to lag behind the US and Japan marks for at least 15 more years).

This economic expansion has given rise to a growing middle class that likes to get behind the wheel.  In fact, in September 2013, car sales in China were up 21%.  The increase in traffic is straining air quality and taxing China’s infrastructure:  Some of the world’s largest traffic jams are in China.  Not only that, but oil demand is going through the (sun)roof.

As the number of passenger cars and commercial trucks increase, up to 40% of China’s oil consumption is used in the transportation sector.  China is clearly the largest transportation energy consumer among regions that don’t belong to the Organisation for Economic Co-Operation and Development (OECD), and it leads in growth in world demand for transportation fuels.  For some perspective, consider this:  In 2010, China’s transportation energy use was only one-third of the US amount.  By 2040, the forecast has the two countries neck-and-neck.

So the million-dollar-question is:  Who will meet China’s energy needs?

Our northerly neighbor has already begun looking to feed China’s growing appetite for energy, beefing up east-west pipeline infrastructure to new marine terminals in British Columbia that will serve the Pacific Rim.  Powerhouses such as Kinder Morgan and Enbridge, for example, are spending billions to enhance transport options through their pipelines that run to Canada’s west coast.

Plus, the Canadian government has strengthened diplomatic ties with China simultaneously with a burgeoning economic partnership.  Over the last six years, with the aim of supporting Canada’s emergence as an energy superpower, China has become the largest foreign investor in Canadian energy, running up a $30 billion tab.  And Canada recently signed a Foreign Investment Promotion and Protection Agreement that gives China generous investment protection. 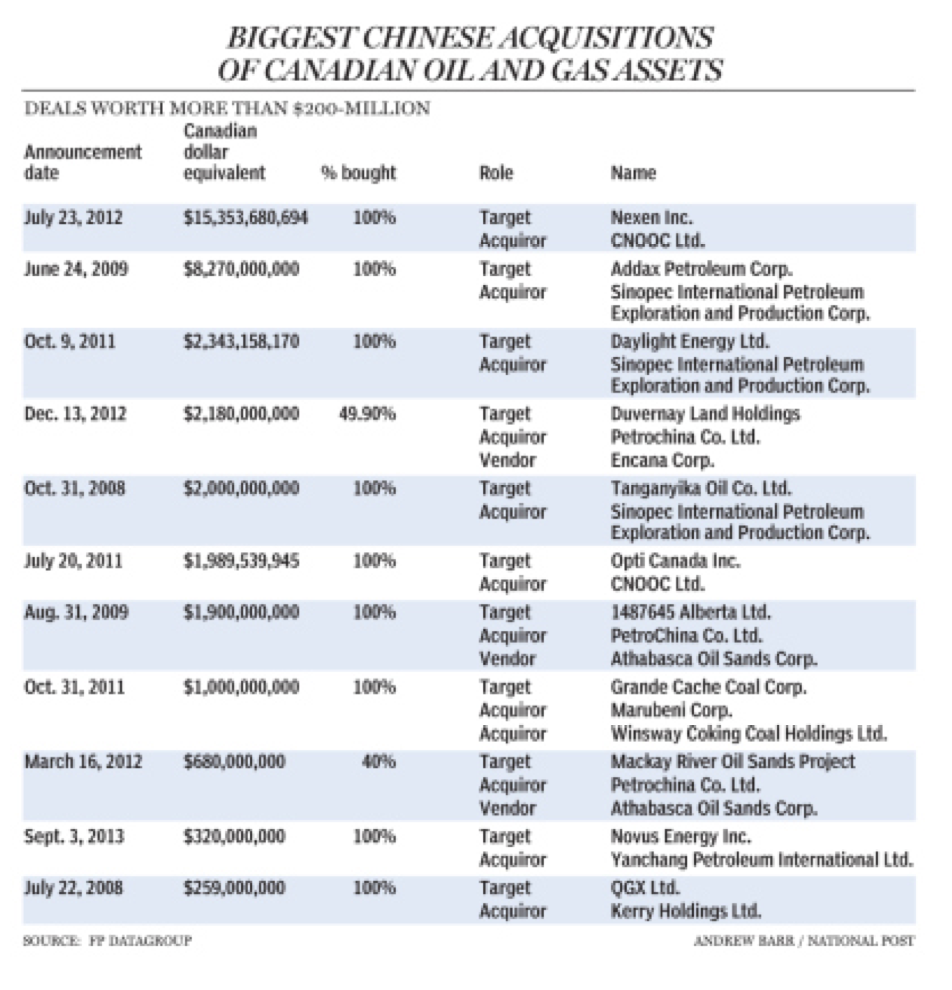 In early 2013, the Canadian government approved the sale of energy giant Nexen to the state-owned China National Offshore Oil Corporation (or CNOOC Group).  With a price tag of $15.1 billion, China’s takeover of Nexen was the largest Chinese purchase ever in a market economy.

But the transformation of Nexen hasn’t gone well.

Before the deal was even signed, Canadian Prime Minister Stephen Harper said that investments by state-owned enterprises for controlling interests in oil sands companies would no longer be allowed, calling the Nexen sale “not the beginning of a trend but rather the end of a trend.”

At the same time, China is facing unanticipated issues that show that it “didn’t read the doing-business-in-Canada-manual,” as one energy lawyer put it.  Those concerns include high costs, operational challenges, aboriginal issues and volatile bitumen prices.  The big three state-run Chinese companies (CNOOC, PetroChina, and Sinopec) are under pressure to show profits… but are instead showing mixed results.  CNOOC-owned Nexen has hasn’t transformed well into the role of wholly owned subsidiary (one Canadian government official decried its foundering status, saying it had gone from being a model of national enterprise to a “pet on a leash.”).  PetroChina has wrestled with the influential Fort McKay aboriginal population as it tries to expand into the oil sands of northern Alberta.  And Sinopec lost its Canadian CEO following allegations of insider trading.

Strategic – but Strained – Relationship with OPEC

These stand-off-ish issues with Canada suggest that the Organization of the Petroleum Exporting Countries (OPEC) will probably remain China’s key supplier.  And, as we know from experience, relying on the volatile countries that comprise OPEC can lead to problematic showdowns – even for a powerhouse like China.

China’s already gotten a whiff of how tricky the relationship with OPEC can be: Beijing, a long-term buyer of Iranian oil, was forced to cut its imports from Iran’s state company by 20% in 2012 because of a contract dispute.  Although the conflict was resolved within months, China has since reduced its average oil import levels from Iran to “maintain diplomatic ties with the United States and Europe” following global sanctions related to Iran’s nuclear program.

And Iranian crude represents just a portion of the oil China imports from OPEC, a total growing so rapidly that it’s like a tap has been turned on.  In 2004, China imported $20 billion in oil from OPEC; less than a decade later, in 2012, it imported seven times as much.

Reliance on OPEC raises the scepter that China may face oil shortages due to political unrest.  In addition, China may find itself vulnerable to the same kinds of commodity price pressures that the US is all too familiar with.  At the same time, however, maintaining a balance of power in Asia becomes more difficult, according to Joseph Nye, Jr., Harvard University Distinguished Service Professor and author of The Future of Power.

“If you look at East Asia, for example, one of the great questions there is the rise of China and Chinese power.  And that means that the American alliance with Japan, Korea, the Philippines, and so forth becomes more important to those countries,” Nye maintains.  “It also means that we will need those countries as we try to cope with a rising China.  So while China will become more dependent on energy imports from the Middle East and the US might become less dependent on energy imports from the Middle East, there will still be important regional balance of power concerns that keep those alliances at the forefront.”

Beyond Canada and the OPEC cartel, China is also buying oil and making investments in oil fields in Africa.  And that may have far-reaching foreign policy, economic, and security concerns for the US.

While foreign investment isn’t allowed in most of the world’s other prolific oil-producing regions, the countries of Africa welcome it because they lack the money for exploration and production on their own.  While almost all of the main international oil companies come to the African continent to compete for its oil resources, some foreign policy gurus think that China’s involvement in Africa – which dates back to 1995 – has eroded the West’s influence on the continent.

Because the African continent is regarded as one of the most promising regions for future oil production, China’s relationships there might undermine American oil interests.  But more than that, because China’s oil companies operate in places like Sudan and Angola that are rife with human rights violations and corruption, their activities are conflict with the West’s long-held goal of good governance and civil rights.  By offering integrated aid packages that trade, for example, infrastructure financing and construction for a shot at oil interests, China has what is considered an unfair competitive advantage over Western oil companies.

How the burgeoning China-Canada and China-Africa trade relationships will affect US energy security remains to be seen – particularly with the US stalemate over the Keystone XL pipeline putting a damper on our traditionally chummy Canadian relations and as US oil imports from Nigeria and other African nations have scaled back on the rise of US shale developments.  But as China replaces the US as the world’s largest oil customer, its influence in oil-producing regions inevitably rises.

This could force China into the untenable position of watchdog in unstable regions like the Middle East, which actually might have some positive ramifications for the US and the rest of the world.  Observers suggest that, while the US won’t give up its unofficial status as security service for global oil production and shipping routes, China’s growing dependence on foreign oil will likely force the country to become less isolationist and more engaged within the international community.  Participating in multilateral initiatives – like when it cut back on Iranian imports – shows that China is ready to help ensure global stability.

There have even been suggestions that China could begin investing in a larger, more aggressive navy, preparing for the possibility that the US will no longer want – or need – to police shipping lanes in the Persian Gulf or elsewhere.

In short, as China expands its oil grab, it may be coming face-to-face with tough global issues that the nation hasn’t encountered before.  And we can all expect to feel an impact, whether China is equipped to handle them or not.