The US Shale Revolution: Who Really Deserves the Credit?

Just a few decades ago, fracking was fringe science.  In fact, there was a lot of skepticism about whether it could ever work.  But in the 1970s, two entities joined together to risk big money on what many considered a pipe dream: the O&G industry and good ol’ Uncle Sam.

Now that fracking is a booming business, and natural gas from shale could singlehandedly supply enough energy to last the US 22 years, they both want to take credit.  But who is the true pioneer? 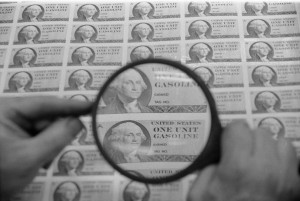 Gas ration stamps were printed as a result of the 1973 oil crisis (US Bureau of Engraving & Printing).

Would you ever lump Big Oil and Big Government together?

These days, it might be hard to fathom – but these strange bedfellows have actually been working together for decades.  In fact, the federal government has been a driving force behind the oil and gas industry’s technological revolution that has given us cheap extraction of oil, and, especially, natural gas from shale.  This partnership between the government and the energy industry dates back 30 years, with joint public-private initiatives specifically designed to commercialize tight gas, including shale.

Thanks to their collective work, we now have massive hydraulic fracking, 3-D seismic mapping, and horizontal drilling.  Just as importantly, we also have a significantly better understanding of all potential tight gas reservoirs.  All of this has contributed to our current energy boom.  Our domestic energy production has expanded, making us less reliant on foreign oil and taking us one step closer to energy independence.  Along the way, we’ve seen wholesale electricity costs drop, aging plants retire, and the proliferation of a cleaner energy source.

But there’s a catch to this love story.

“Sure, the government helped at different times, but some of what they did was wrong,” says Dan Steward, former geologist for Mitchell Energy, in a recent personal interview. “They couldn’t have known that, of course – no one knew enough about shale to know that.”

Steward is quick to add that some of what the oil and gas companies did was wrong, too, and certainly commends the government entities for their part in fostering the US shale gale.  But he parts ways with those who assert that federal involvement was the end-all, be-all in shale development.  In his estimation, private enterprise was as much a driving force as the government:  In the end, it was the oil and gas industry – and in particular George Mitchell, sometimes known as the “father of fracking” – who stayed the course and made it work.

Steward recognizes that the government played an important role in shale development:  “The government was involved from the standpoint of helping companies with regard to looking at fracks.”

Steward explains that the Department of Energy (DOE) started considering large fracks for tight reservoirs in the 1970s, even investigating nuclear stimulations, and then began partnering with the Gas Research Institute (GRI) and private companies on large frack jobs.  At the time, Mitchell was working on one of the largest: a significant test in Limestone County, Texas, in the tight Cotton Valley limestone.

“I know that the GRI and DOE were involved in that; they put some money in it,” Steward recalls.  “It increased production in the Cotton Valley well and made it a commercial venture.  From that point on, George Mitchell started using large fracks.”

In 1976, the DOE’s Morgantown Energy Research Center, GRI, and dozens of companies and universities partnered to launch the Eastern Gas Shales Project to explore natural gas recovery from shale formations and test core samples from unconventional natural gas deposits.  Geologists drew heavily on that research to guide their explorations, and Mitchell’s team was no exception.

“When Mitchell first got started, the most relevant data the company could look at on shales was the GRI/DOE Eastern Gas Shales Project.  They studied it, and that helped too,” Steward readily acknowledges.  “So you could argue that in that case the government really helped Mitchell over the edge to try it.”

But the studies funded by the government only took Mitchell so far.  There was still a critical piece missing – namely, individual tenacity.

As Steward notes, one of the main findings in the Eastern Gas Shales study was that a shale formation would only prove commercial if it had open natural fractures.  Mitchell used that information to guide their analysis in the Barnett.  “When we did that, we found a lot of natural fracturing, but it was all healed up,” Steward remembers.  “So based on the GRI/DOE study, Mitchell could have said this is a failure, quit right here.  But he didn’t.”

The government based its conclusions on the results of extensive R&D in the Eastern Gas Shales experiment and existing analogs at the time.  It appeared that once the government scientists had reached their conclusions, they changed their focus away from formations that didn’t display these telltale open fractures.

Despite the DOE’s verdict on open fractures, though, Mitchell kept looking at the Barnett.  When they found no open fractures, they induced them.  The result?  Because of the pressure sink that resulted from producing the fractures, the gas from the tight rock started seeping into the induced cracks.  “The big takeaway that we got: you do NOT have to have open fractures to produce shales.” 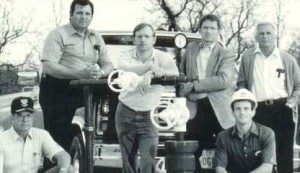 An even bigger takeaway for Mitchell’s team:  Collaborations with the government could only take them so far.  As the Eastern Gas Shales experience showed, the government came to an incomplete conclusion – and  enterprising energy companies themselves would need to take the helm to uncover shale’s true potential.  Yes, the government helped establish the foundation by contributing resources to the study of shale gas, but it was Mitchell’s team who built upon that research and made the big breakthrough.

Investment, Not a Handout

Much of the government’s action in the shale game came in the form of cost-sharing on demonstration projects and favorable incentivizing tax policies.  This public-private partnership evolved as many early efforts – especially research and development – were too expensive and risky for private firms to take on themselves.

Once again, there’s a caveat.

Steward says that two things from the government were supposed to help private oil and gas enterprises: tax incentives and multi-tiered product price.  But neither perk, according to Steward’s experience, was essential to Mitchell’s success.  “The tax incentives helped us, but it didn’t make or break what we were doing,” he says.  And the multi-tiered product price “didn’t really help us in the Barnett because we had a gas contract that provided for a higher price.”

Understandably, Steward feels frustrated when he hears people say that the government basically propped Mitchell up:  “The government did NOT bail the company out.  We were not insolvent.  We made all our payments.”

In fact, when Mitchell started partnering with the DOE and GRI in the Barnett in 1991 to analyze the benefits of horizontal drilling, the government did help pitch in with some helpful core evaluations.  But as far as actual fracking jobs, they only contributed cash for one well. The company contributed the equivalent cost for the vertical well boring completion, while the DOE and GRI made up the difference to make it a horizontal completion.

Did the government contributions help?  Sure, but it was private industry dollars that kept the ball rolling. The next two horizontal wells – funded purely on Mitchell’s dime – were commercial failures.  And no one but Mitchell took the hit for that.

“Should we reasonably believe that but for the energy technology programs of the Department of Energy, we’d be unable to produce natural gas from shale?” queries economist Michael Giberson, an instructor with the Center for Energy Commerce in the Rawls College of Business at Texas Tech University.  “Department of Energy involvement may have shaped the direction of research, but I suspect its pool of research funds was merely convenient to technological advancement and not necessary.”

Perhaps one of the biggest ways the government helped foster innovation in the oil and gas industry was simply through its structure and attitude.  Our founding fathers were onto something when they established a free-market type of system that promotes private enterprise.  And that was Steward’s experience during the early days of shale:  “The government didn’t stand in the way of our trying things.  In some countries, that isn’t the case.  But here, they created a conducive atmosphere.”

And that is a contribution that cannot be underestimated.

”We Made It Work”

Overall, Steward maintains that the government’s contribution is relatively small compared to Mitchell’s hand in shale gas development:  “Mitchell was by far the biggest contributor.  On a contributor scale of 1 to 10, I estimate that we were a 7 or 8, and the government was 2 or 3.  George Mitchell stayed with it for 20 years and made it work.”

Of course, not everyone would agree.  Take, for example, the Breakthrough Institute thinktank:  “The federal government generously subsidized drilling for non-conventional gas throughout the 1980s and 1990s, when oil and gas were cheap.  While the rise in natural gas prices in the late 1990s sparked the shale gas revolution, it was the federal non-conventional gas tax credit that made Mitchell’s experimenting possible in the early years, when there was no market for more expensive shale gas.”

So, who wins – Mitchell or the US government?

In the end, to the average person, perhaps it doesn’t really matter.  Even if private enterprise did foot most of the bill as Steward maintains, it would have been a hard road with no government help whatsoever.  Regardless of whose hand was bigger, we are certainly reaping the benefits of those early collaborative years.  Low prices created by the shale gas revolution have generated more than $100 billion in energy cost savings every year since at least 2009, giving justification to all the blood, sweat, tears, and investments into research and development.

The fact is, the government and the oil and gas companies worked together to make fracking a success.