If it seems like the energy globe has tilted off its axis, that’s because the balance of power in the petroleum world has shifted.  Thanks to the domestic shale revolution, the US is no longer as dependent on Middle Eastern and other super-suppliers.  And this is having a ripple effect throughout the world – changing alliances and creating new ones – from North America to South Australia.

What Happens to OPEC?

The aptly named Organization of the Petroleum Exporting Countries (OPEC) has long been the standard – and the muscle – in the worldwide oil trade.  Since its founding in 1960, this band of oil-rich nations has amassed a good deal of power and influence over the energy market.  But its influence is now being challenged.  In its recently released World Outlook, OPEC acknowledged that it had underestimated the significance of the North American energy boom.  The group tripled previous estimates for shale oil produced in the US and, to a lesser degree in Canada, and predicted a decline in demand for its own crude through to 2018.

No OPEC nation is immune to the effects of a sustained price collapse, even though breakeven costs of oil production vary widely within the cartel.  That means that some member countries are able to get by with much lower oil prices than others.

Saudi Arabia is, of course, OPEC’s pivotal and most productive  member.  As top dog, it’s much less vulnerable to the effects of the US shale boom.  In fact, Saudi Arabia’s oil minister and OPEC’s de facto leader Ali al-Naimi recently said that Saudi Arabia welcomes the US shale oil boom because the supply increase could help stabilize the global oil market.  In short, Saudi Arabia and other Gulf states have the financial resources to cope with lower oil prices.  Saudi Arabia, for example, needs just $70 per barrel to make ends meet.

But even the financially stable Saudis are feeling the pressure.  Saudi Arabia’s most prominent businessman, Prince Alwaleed bin Talal, wrote an open letter last summer to the oil minister and his own uncle, King Abdullah, urging them to be more aware of the “continuous threat” the Kingdom faces because of its financial dependence on exporting oil.  “The world is increasingly less dependent on oil from OPEC countries including the kingdom,” he wrote.

And on the other side of the OPEC wealth spectrum stand Nigeria and other African petrostates that desperately need high oil prices to balance their national budgets.  In addition to requiring higher prices, Nigeria (with a breakeven of $87 per barrel) is also trying to deal with a serious loss of oil exports.  Since 2010, exports of Nigerian oil to the US have dropped by about 55% because US refineries can now get similar quality crude from North Dakota’s Bakken instead.  As Nigerian oil minister Diezani Alison-Madueke readily acknowledges, “Shale oil and the increase in their gas production is already affecting our exports to the United States.”  Given that oil and gas exports account for roughly 80% of Nigeria’s government revenues and more than 90% of foreign exchange earnings, a sharp and sustained decline in global crude oil prices could devastate Nigeria’s economy.  The International Monetary Fund (IMF) recently noted that if oil prices fall to between $80 and $85 per barrel (as an annual average), it would wipe out Nigeria’s Excess Crude Account balances within one year.

Beyond the issues arising from the increase in US shale production, OPEC is also concerned about the emergence of new oil discoveries that will likely turn places like Brazil and Australia into major producers.  In Brazil, proven reserves of oil and natural gas are now 14.4 billion barrels, which translates to a top-ten ranking.  Nearly 233 billion barrels of oil have been discovered in the Australian outback, and there are estimates that 16 million acres of land in the Arckaringa Basin in South Australia contain between 133 billion and 233 billion barrels of shale oil trapped in rocks.  Even though indications say that only 3.5 billion barrels will be recovered easily, this forces OPEC to constrain prices or face higher competition.

As if the external pressures weren’t bad enough, individual member nations are increasingly jockeying for position within the cartel.  A primary jockey is Iraq, working to assume more prominence in the organization.  Iraq has been rebuilding an oil sector severely damaged by UN sanctions and a protracted war, and recently announced plans to expand capacity with a goal of knocking Saudi Arabia from its position as Middle East production kingpin.  But how soon that could happen – if it’s even likely at all – is uncertain.   Although Baghdad awarded long-term service contracts to a host of foreign oil majors in two bid rounds, it has since moderated its ambitions.  Its short-term target raises its volume from 3 million barrels per day to 9 million barrels per day, compared to Saudi Arabia’s 12 million barrels per day.  Baghdad has been working to overcome infrastructure bottlenecks that have held back southern exports, including a new metering system to Gulf export facilities that began in September 2013.  But that project actually resulted in Iraqi crude exports falling by an average of more than 500,000 barrels per day over the month.  Iraq is also looking to replace the exports that would normally flow from Iran, which have been stymied by international sanctions.

Iraq, for one, has already made huge inroads into Iran’s Asian markets, overtaking Tehran’s position as Turkey’s top supplier.  As part of its position-jockeying, Iraq has announced plans to become the number two supplier to China, behind Saudi Arabia but ahead of fellow OPEC member Angola.

With current predictions  that US oil imports from the Middle East will fall to only 0.3 million barrels per day in 2025,  the rest of the OPEC brethren have also begun to look east to fill the gap.  The International Energy Agency (IEA) anticipates that China, India, and other Asian countries will become more reliant on the Middle East for oil:  By 2030, 80% of China’s oil and 90% of India’s oil should come from the Middle East.  Japan and South Korea will remain completely dependent on oil imports.

And one hand washes the other:  As a result of its growing dependence on Middle East oil, China is likely to become more strategically interested in the region.  Because China, Japan, and South Korea will increasingly depend on the free passage of seaways from the Middle East, particularly through the US-patrolled Strait of Hormuz, China will almost certainly have to take on more political and security responsibilities in the Middle East – something Beijing is currently reluctant to do.

If either China or India seeks to gain a greater stake in regional security in order to protect their economic interests, it could dampen fears of supply disruptions and potentially bring down oil prices.

Where Does This Leave NATO and the EU?

The military alliance of the North Atlantic Treaty Organization has been going strong since its origins back in 1949.  Although it remains a primarily European-North American alliance, other neighboring regions of the world have entered into NATO partnership arrangements. 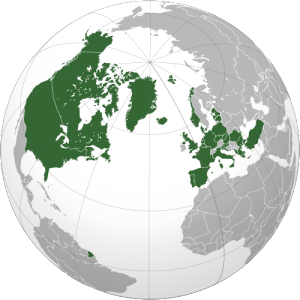 NATO has 28 members, mainly in Europe and North America.

In Europe, the fear is that a less-dependent US will lose interest in the Middle East and slowly reduce its presence in the Persian Gulf.  Would this mean that the other NATO members would be left holding the bag?  A draft report discussed at a NATO Parliamentary Assembly session in October 2013 considered the possibility: “North America as a whole is heading toward an ever higher degree of energy autonomy which might render it ever less directly concerned with events in the Persian Gulf.”

(Many experts agree that NATO’s apprehension is unfounded, though.  The suggestion is that, betwen Iran’s nuclear program, Syria’s chemical weapons, and the always-slippery peace process between Israel and the Palestinians, the Middle East will continue to be high on our foreign policy agenda.  Ayham Kamel, director for Middle East and Africa at Eurasia Group in New York, summed it up: “US energy independence won’t signal withdrawal from the Gulf region, but a reassessment of priorities instead.”  But public support for military operations in the region could be more difficult to muster as oil dependence wanes.)

Even if this fear remains pure speculation, the US shale energy revolution still poses economic challenges to NATO’s European allies.  Cheaper energy is giving US industry a competitive edge and increasing pressure on Europe’s crisis-hit economy.  High local energy prices pose a challenge for competitiveness:  In 2012, industry gas prices in the European Union were more than four times higher than stateside.

The good news for EU members is that the US shale revolution means that a greater variety of gas supplies from liquefied natural gas (LNG) originally destined for the US has been redirected to European markets. The 113th Congress introduced bills aimed at facilitating NATO members’ access to US LNG in hopes of giving Europe greater energy security by undermining Russia’s energy choke-hold.  Significant quantities shale gas in the form of LNG could begin arriving in Europe by 2020.

Read more on LNG exports to Europe on our post “The Dash for Gas: Will the US Finally Support LNG Exports to Beleaguered Nations?” [link to https://canaryusa.com/us-looks-to-export-lng/]

Another plus for Europe is that US and Canadian oil production could make NATO nations less sensitive to disruption of oil supplies from other countries, said Phillip Cornell, special advisor to the International Energy Agency.

Like OPEC, NATO has spent considerable time studying the effects of the shale gas revolution on its member nations.  Last fall, NATO convened a roundtable of experts to analyze the impact.  Although no specifics have been announced, NATO said that “a reversal of – or significant change in – the geopolitical status quo seems more and more likely.”

Clearly, the US shale revolution is transforming the global energy landscape.  In the wake of this transformation, longstanding alliances are facing new challenges, and new affiliations are taking on new significance.  The Middle East, China, Russia, and Europe are all having a hand in redrawing energy market map, but the master stroke remains to be seen.